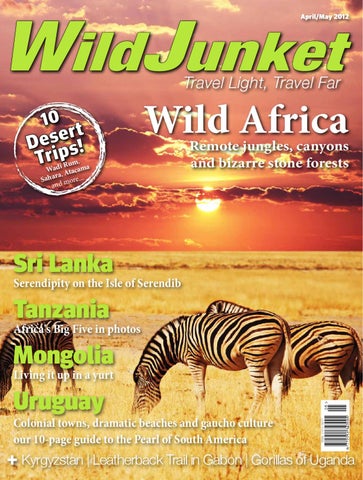 Serendipity on the Isle of Serendib

Mongolia Living it up in a yurt

Colonial towns, dramatic beaches and gaucho culture our 10-page guide to the Pearl of South America

From the Road 32 | Under the Radar: Kyrgyzstan

A country blessed with dramatic landscapes, untouched nature and some of the most hospitable people in the world.

We conquer an army of street foods in Seoul to hunt down the best - and the most exotic.

After decades of civil war, we head back to find renewed peace on the isle of Serendib.

A photo essay of Africaâ&#x20AC;&#x2122;s Big Five on the savannahs of Serengeti.

Head into the wilderness of Uganda and come face to face with the famous gorillas.

Wander through the colonial towns, windwept beaches and Gaucho lands with our comprehensive travel guide on Uruguay.

06 | Snapshots Feast on impressive photos from our

58 | Calendar A look at festivals and events happening

readers around the world.

16 | Trip Ideas Ten ideas for desert trips - from the Sahara

to the Namib Desert. 112 | Travel Rant How much do stereotypes speak the truth? Mike Sowden muses, and rants, about busting prejudices. 113 | Travel Thoughts Our columnist Candace Rardon ponders about the concept of ‘authentic’ travel. 116 | Sketches Darbur Square, Kathmandu, in watercolors.

around the world this Apr/May. 110 | Stay Jordan’s stylish hot spring resort reinvents the Middle Eastern bath experience. 114 | Gear We recommend a list of travel gear and electronics perfect for hiking this spring.

Imagine being the only person for thousands of miles. No lights, no noise, no airplanes, no wifi. Just you, your travel mates and several thousand penguins. After sailing down the Antarctic Peninsula, heading into the Lemaire Channel, it became apparent just how small we are in this vast world. The Lemaire Channel is also known as “The Kodak Gap” because of the stunning mountains, glaciers, and bright blue icebergs surrounding the narrow passageway – it’s almost impossible to take a bad photo. What made this morning particularly special though was how crystal clear it was outside (the mountain tops are usually veiled in clouds). - Meghan Palmer 4 | WildJunket April/May 2012

The Lost Island From endemic wildlife to bizarre stone forests and unexplored beaches, remote Madagascar may just be one of Africaâ&#x20AC;&#x2122;s last great unknowns. 6 | WildJunket April/May 2012

t was a tail. A very long, white and bushy tail. It swung back and forth in our direction, combing the breeze for our presence as we slowly approached. Bending our backs and straining our eyes against the sunlight, we watched as the apelike animal leapt from tree to tree towards us. 30 feet, 15 feet, five feet. It was in full view now – all of its white furry body, long monkey limbs, webbed feet and olive green eyes. Just inches before us the creature curiously sniffed us out, with not the least bit of apprehension. A lemur. To be precise, a Verreaux’s sifaka, which is also known as a dancing lemur for its comical locomotion on the ground. This primate is one of the most popular lemurs and definitely the weirdest. Just 15 minutes into the Kirindy Forest Reserve and we’d seen our first lemur. Here on the island of Madagascar, lemurs are the stars of the

jungle – and also the main draw for the few intrepid travelers who make their way to this remote isle each year. Most people come to Madagascar to get a first-hand look at its unique wildlife, with the lemur as the headline act. But as my photographer husband and I traversed through Madagascar – from lemur-stalked Kirindy to the stone pinnacles Tsingy de Bemaraha, and then on to the laid back beach town of Morondava – it was quickly apparent there’s far more to see in this largely unexplored part of Africa.

Biodiversity Hotspot Marooned in the vast Indian Ocean, la Grand Île is home to an uncommon group of animals and plants found nowhere else in the world. Most of these have evolved after the island’s separation from the African continent 165 million years ago. Only in Madagascar can you find the world’s biggest chameleons, over 70 species

of lemurs, and 6,000 different kinds of endemic plants, including the bizarre spiny ocotillo tree and the bottleshaped baobab. Slightly bigger than California, Madagascar is the fourth largest island in the world. Stretching out over 3,100 miles (5,000 km) of untouched coastline, it features extremely diverse terrains and habitats: from the dramatic mountains of the north to pristine spearmint-blue beaches in the south; from green humid rainforests in the east to the spiny forests of the west. Sadly, Madagascar’s age of innocence might be short-lived. With problems like civil unrest, corruption and overexploitation of resources plaguing the country, the United Nations Environment Programme (UNEP) has declared Madagascar’s ecosystem one of the most threatened in the world. Lemurs are facing extinction as some tribes in Madagascar continue to hunt them for bush meat while patches of

Wild Spirit: A furry white Verraux Sifaka scrambles up a tree Opposite: The terrain in Southern Madagascar www.wildjunket.com | 9

New Peace After decades of intense civil war and a devastating tsunami, peace has finally returned to Sri Lanka, an island of millennia-old temples and timeless ruins.

Stairway to Heaven: the climb that leads to the summit of the Sigiriya Rock Golden Glory (right): one of the Buddha statues in Dambulla

e isn’t blinking. My eyes stay fixed in this impossible staring contest, willing the figure in front of me to defy the odds and give me a wink. But then again, at over 2,000 years old, this guy probably has had a little practice. With his perfect golden skin and impeccable posture, he’s one of 153 Buddha statues lining the walls of the cave temples in Dambulla, Sri Lanka. Built into a 160-meter rock, the Golden Temple of Dambulla began as a Buddhist monastery in the 3rd century BC – a truly unfathomable amount since my own country is barely 400 years old. Although they differ in size and shape, each cave temple is a marvel of shrines, boldly-painted murals, and Buddhas in a variety of poses: sitting, standing and even reclining - one such 12 | WildJunket April/May 2012

statue in the first temple measures 14 meters long. Inside, the air is fragrant with the smell of incense, still sweet from the pink and white lotus blossoms brought by pilgrims. As I move from cave to cave, rain begins to fall outside. The gentle trickle against the rock only adds to the peaceful atmosphere surrounding the site. Outside the temples, I pause for a moment at the edge of a cliff - the landscape parting like stage curtains to reveal the world below. Only the giant crown of the golden Buddha’s head is visible amidst the trees. I spot the road I’d just traveled on from Kandy, now a thin black ribbon winding in and out of the forest. The expansive flatlands are ringed by dark, jagged hills and just in the distance, the unmistakable mound of Sigiriya Rock. “You want tea?” It’s one of the guides I’d spotted walking around the complex earlier, a man named

Pramatissa. He’s sitting beneath a tree with a few other guides and inviting me to join them. I soon learn one of the men isn’t a guide but has come from the town below. Every day twice a day, Anantu makes the trek up the hill bearing samosas, egg patties and a thermos of black tea, providing breakfast and lunch for the guides. “Anantu is from Trincomalee,” Pramatissa tells me. “He moved here twenty years ago because of the war.” Located on the northeast coast of the country, Trinco (it’s often shortened), was severely affected by the civil war and the 2004 tsunami. I head back down the hill with a belly full of two cups of warm tea and I take this mention of the war as a sign that I’m on the right path. As fascinated as I am by Sri Lanka’s millennia of history, it is the chance to learn about the country’s more recent past that intrigues me most.

At Home in Kyrgyzstan This Central Asian country has dramatic mountain landscapes, pristine nature and outstanding trekking opportunities - but itâ&#x20AC;&#x2122;s the people who make it an experience youâ&#x20AC;&#x2122;ll never forget.

Mongolian Escape A yurt stay on the empty plains of Inner Mongolia reveals a region in China rich in nomadic traditions and untouched landscapes, and a world away from bustling cities. 16 | WildJunket April/May 2012

Home to vibrant wildlife and the Nile River, Uganda is the perfect setting for a Sub-Saharan adventure. From green-eyed leopards to the rare mountain gorilla, you might just find yourself staring nature in the face.

Outdoor adventures in the deep blue

A local glimpse on island life 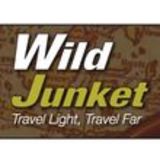 WildJunket is a brand new digital magazine with a focus on outdoor adventures and sustainable travel. Our mission is to inspire readers to t...

WildJunket is a brand new digital magazine with a focus on outdoor adventures and sustainable travel. Our mission is to inspire readers to t...