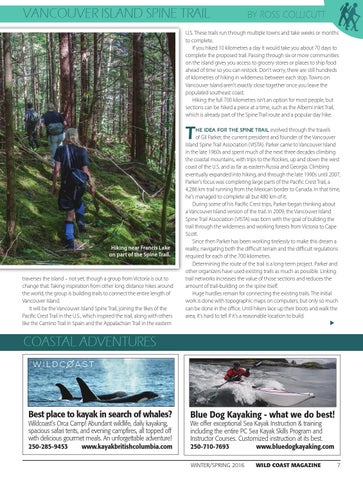 U.S. These trails run through multiple towns and take weeks or months to complete. If you hiked 10 kilometres a day it would take you about 70 days to complete the proposed trail. Passing through six or more communities on the island gives you access to grocery stores or places to ship food ahead of time so you can restock. Don&#39;t worry, there are still hundreds of kilometres of hiking in wilderness between each stop. Towns on Vancouver Island aren&#39;t exactly close together once you leave the populated southeast coast. Hiking the full 700 kilometres isn’t an option for most people, but sections can be hiked a piece at a time, such as the Alberni Inlet Trail, which is already part of the Spine Trail route and a popular day hike.

he idea for the spine trail evolved through the travels

Hiking near Francis Lake on part of the Spine Trail.

traverses the island – not yet, though a group from Victoria is out to change that. Taking inspiration from other long distance hikes around the world, the group is building trails to connect the entire length of Vancouver Island. It will be the Vancouver Island Spine Trail, joining the likes of the Pacific Crest Trail in the U.S., which inspired the trail, along with others like the Camino Trail in Spain and the Appalachian Trail in the eastern

of Gil Parker, the current president and founder of the Vancouver Island Spine Trail Association (VISTA). Parker came to Vancouver Island in the late 1960s and spent much of the next three decades climbing the coastal mountains, with trips to the Rockies, up and down the west coast of the U.S. and as far as eastern Russia and Georgia. Climbing eventually expanded into hiking, and through the late 1990s until 2007, Parker&#39;s focus was completing large parts of the Pacific Crest Trail, a 4,286 km trail running from the Mexican border to Canada. In that time, he&#39;s managed to complete all but 480 km of it. During some of his Pacific Crest trips, Parker began thinking about a Vancouver Island version of the trail. In 2009, the Vancouver Island Spine Trail Association (VISTA) was born with the goal of building the trail through the wilderness and working forests from Victoria to Cape Scott. Since then Parker has been working tirelessly to make this dream a reality, navigating both the difficult terrain and the difficult regulations required for each of the 700 kilometres. Determining the route of the trail is a long-term project. Parker and other organizers have used existing trails as much as possible. Linking trail networks increases the value of those sections and reduces the amount of trail-building on the spine itself. Huge hurdles remain for connecting the existing trails. The initial work is done with topographic maps on computers, but only so much can be done in the office. Until hikers lace up their boots and walk the area, it&#39;s hard to tell if it&#39;s a reasonable location to build. u

Join us for a tour of the Walbran Valley, on a speed record attempt around Vancouver Island, on walks to giant trees near Vancouver and to our choices for best tours, destinations and adventures for 2016. It's all in issue #2 of the magazine of outdoor recreation and adventure travel for the Pacific coast.