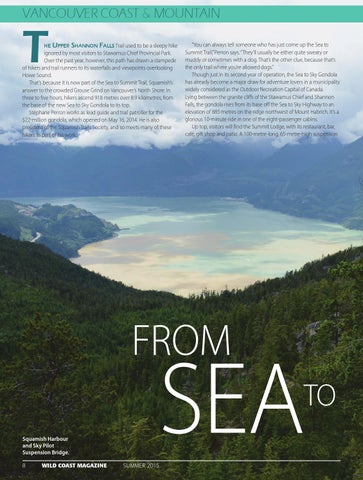 Upper Shannon Falls Trail used to be a sleepy hike

ignored by most visitors to Stawamus Chief Provincial Park. Over the past year, however, this path has drawn a stampede of hikers and trail runners to its waterfalls and viewpoints overlooking Howe Sound. That’s because it is now part of the Sea to Summit Trail, Squamish’s answer to the crowded Grouse Grind on Vancouver’s North Shore. In three to five hours, hikers ascend 918 metres over 8.9 kilometres, from the base of the new Sea to Sky Gondola to its top. Stéphane Perron works as lead guide and trail patroller for the $22-million gondola, which opened on May 16, 2014. He is also president of the Squamish Trails Society, and so meets many of these hikers as part of his work.

“You can always tell someone who has just come up the Sea to Summit Trail,” Perron says. “They’ll usually be either quite sweaty or muddy or sometimes with a dog. That’s the other clue, because that’s the only trail where you’re allowed dogs.” Though just in its second year of operation, the Sea to Sky Gondola has already become a major draw for adventure lovers in a municipality widely considered as the Outdoor Recreation Capital of Canada. Lying between the granite cliffs of the Stawamus Chief and Shannon Falls, the gondola rises from its base off the Sea to Sky Highway to an elevation of 885 metres on the ridge northwest of Mount Habrich. It’s a glorious 10-minute ride in one of the eight-passenger cabins. Up top, visitors will find the Summit Lodge, with its restaurant, bar, café, gift shop and patio. A 100-metre-long, 65-metre-high suspension This is the inaugural edition of the new Wild Coast Magazine, the magazine of outdoor recreation, adventure travel and ecotourism for Britis...

This is the inaugural edition of the new Wild Coast Magazine, the magazine of outdoor recreation, adventure travel and ecotourism for Britis...