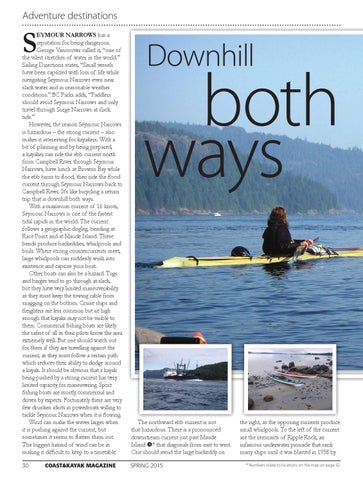 EYMOUR NARROWS has a reputation for being dangerous. George Vancouver called it, “one of the vilest stretches of water in the world.” Sailing Directions states, “Small vessels have been capsized with loss of life while navigating Seymour Narrows even near slack water and in reasonable weather conditions.” BC Parks adds, “Paddlers should avoid Seymour Narrows and only travel through Surge Narrows at slack tide.” However, the reason Seymour Narrows is hazardous – the strong current – also makes it interesting for kayakers. With a bit of planning and by being prepared, a kayaker can ride the ebb current north from Campbell River through Seymour Narrows, have lunch at Browns Bay while the ebb turns to flood, then ride the flood current through Seymour Narrows back to Campbell River. It’s like bicycling a return trip that is downhill both ways. With a maximum current of 16 knots, Seymour Narrows is one of the fastest tidal rapids in the world. The current follows a geographic dogleg, bending at Race Point and at Maude Island. These bends produce backeddies, whirlpools and boils. Where strong countercurrents meet, large whirlpools can suddenly wink into existence and capsize your boat. Other boats can also be a hazard. Tugs and barges tend to go through at slack, but they have very limited maneuverability as they must keep the towing cable from snagging on the bottom. Cruise ships and freighters are less common but sit high enough that kayaks may not be visible to them. Commercial fishing boats are likely the safest of all as their pilots know the area extremely well. But one should watch out for them if they are travelling against the current, as they must follow a certain path which reduces their ability to dodge around a kayak. It should be obvious that a kayak being pushed by a strong current has very limited capacity for maneuvering. Sport fishing boats are mostly commercial and driven by experts. Fortunately there are very few drunken idiots in powerboats willing to tackle Seymour Narrows when it is flowing. Wind can make the waves larger when it is pushing against the current, but sometimes it seems to flatten them out. The biggest hazard of wind can be in making it difficult to keep to a timetable. 30

The northward ebb current is not that hazardous. There is a pronounced downstream current just past Maude Island * that diagonals from east to west. One should avoid the large backeddy on SPRING 2015

the right, as the opposing currents produce small whirlpools. To the left of the current are the remnants of Ripple Rock, an infamous underwater pinnacle that sank many ships until it was blasted in 1958 by * Numbers relate to locations on the map on page 32.

Join us in our final issue as we look back on the history of kayaking on the Pacific coast in a special retrospective issue.