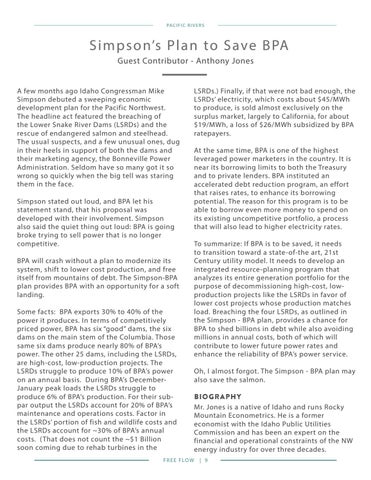 S i m p s o n’s Pl a n to S ave B PA Guest Contributor - Anthony Jones A few months ago Idaho Congressman Mike Simpson debuted a sweeping economic development plan for the Pacific Northwest. The headline act featured the breaching of the Lower Snake River Dams (LSRDs) and the rescue of endangered salmon and steelhead. The usual suspects, and a few unusual ones, dug in their heels in support of both the dams and their marketing agency, the Bonneville Power Administration. Seldom have so many got it so wrong so quickly when the big tell was staring them in the face. Simpson stated out loud, and BPA let his statement stand, that his proposal was developed with their involvement. Simpson also said the quiet thing out loud: BPA is going broke trying to sell power that is no longer competitive. BPA will crash without a plan to modernize its system, shift to lower cost production, and free itself from mountains of debt. The Simpson-BPA plan provides BPA with an opportunity for a soft landing. Some facts: BPA exports 30% to 40% of the power it produces. In terms of competitively priced power, BPA has six “good” dams, the six dams on the main stem of the Columbia. Those same six dams produce nearly 80% of BPA’s power. The other 25 dams, including the LSRDs, are high-cost, low-production projects. The LSRDs struggle to produce 10% of BPA’s power on an annual basis. During BPA’s DecemberJanuary peak loads the LSRDs struggle to produce 6% of BPA’s production. For their subpar output the LSRDs account for 20% of BPA’s maintenance and operations costs. Factor in the LSRDs’ portion of fish and wildlife costs and the LSRDs account for ~30% of BPA’s annual costs. (That does not count the ~$1 Billion soon coming due to rehab turbines in the

LSRDs.) Finally, if that were not bad enough, the LSRDs’ electricity, which costs about $45/MWh to produce, is sold almost exclusively on the surplus market, largely to California, for about $19/MWh, a loss of $26/MWh subsidized by BPA ratepayers. At the same time, BPA is one of the highest leveraged power marketers in the country. It is near its borrowing limits to both the Treasury and to private lenders. BPA instituted an accelerated debt reduction program, an effort that raises rates, to enhance its borrowing potential. The reason for this program is to be able to borrow even more money to spend on its existing uncompetitive portfolio, a process that will also lead to higher electricity rates. To summarize: If BPA is to be saved, it needs to transition toward a state-of-the art, 21st Century utility model. It needs to develop an integrated resource-planning program that analyzes its entire generation portfolio for the purpose of decommissioning high-cost, lowproduction projects like the LSRDs in favor of lower cost projects whose production matches load. Breaching the four LSRDs, as outlined in the Simpson - BPA plan, provides a chance for BPA to shed billions in debt while also avoiding millions in annual costs, both of which will contribute to lower future power rates and enhance the reliability of BPA’s power service. Oh, I almost forgot. The Simpson - BPA plan may also save the salmon. Biography Mr. Jones is a native of Idaho and runs Rocky Mountain Econometrics. He is a former economist with the Idaho Public Utilities Commission and has been an expert on the financial and operational constraints of the NW energy industry for over three decades.