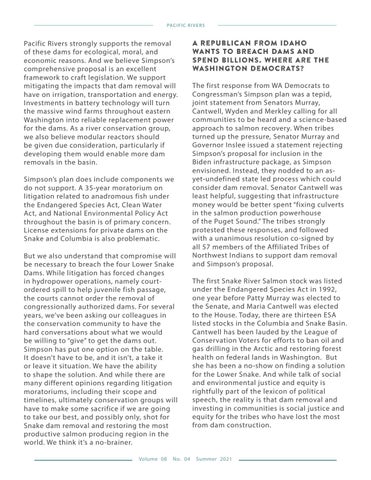 Pacific Rivers strongly supports the removal of these dams for ecological, moral, and economic reasons. And we believe Simpson’s comprehensive proposal is an excellent framework to craft legislation. We support mitigating the impacts that dam removal will have on irrigation, transportation and energy. Investments in battery technology will turn the massive wind farms throughout eastern Washington into reliable replacement power for the dams. As a river conservation group, we also believe modular reactors should be given due consideration, particularly if developing them would enable more dam removals in the basin. Simpson’s plan does include components we do not support. A 35-year moratorium on litigation related to anadromous fish under the Endangered Species Act, Clean Water Act, and National Environmental Policy Act throughout the basin is of primary concern. License extensions for private dams on the Snake and Columbia is also problematic. But we also understand that compromise will be necessary to breach the four Lower Snake Dams. While litigation has forced changes in hydropower operations, namely courtordered spill to help juvenile fish passage, the courts cannot order the removal of congressionally authorized dams. For several years, we’ve been asking our colleagues in the conservation community to have the hard conversations about what we would be willing to “give” to get the dams out. Simpson has put one option on the table. It doesn’t have to be, and it isn’t, a take it or leave it situation. We have the ability to shape the solution. And while there are many different opinions regarding litigation moratoriums, including their scope and timelines, ultimately conservation groups will have to make some sacrifice if we are going to take our best, and possibly only, shot for Snake dam removal and restoring the most productive salmon producing region in the world. We think it’s a no-brainer.

A Republican From Idaho Wants to Breach Dams and Spend Billions. Where are the Washington Democrats? The first response from WA Democrats to Congressman’s Simpson plan was a tepid, joint statement from Senators Murray, Cantwell, Wyden and Merkley calling for all communities to be heard and a science-based approach to salmon recovery. When tribes turned up the pressure, Senator Murray and Governor Inslee issued a statement rejecting Simpson’s proposal for inclusion in the Biden infrastructure package, as Simpson envisioned. Instead, they nodded to an asyet-undefined state led process which could consider dam removal. Senator Cantwell was least helpful, suggesting that infrastructure money would be better spent “fixing culverts in the salmon production powerhouse of the Puget Sound.” The tribes strongly protested these responses, and followed with a unanimous resolution co-signed by all 57 members of the Affiliated Tribes of Northwest Indians to support dam removal and Simpson’s proposal. The first Snake River Salmon stock was listed under the Endangered Species Act in 1992, one year before Patty Murray was elected to the Senate, and Maria Cantwell was elected to the House. Today, there are thirteen ESA listed stocks in the Columbia and Snake Basin. Cantwell has been lauded by the League of Conservation Voters for efforts to ban oil and gas drilling in the Arctic and restoring forest health on federal lands in Washington. But she has been a no-show on finding a solution for the Lower Snake. And while talk of social and environmental justice and equity is rightfully part of the lexicon of political speech, the reality is that dam removal and investing in communities is social justice and equity for the tribes who have lost the most from dam construction.