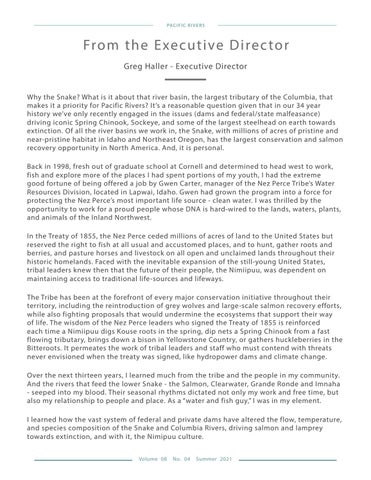 Why the Snake? What is it about that river basin, the largest tributary of the Columbia, that makes it a priority for Pacific Rivers? It’s a reasonable question given that in our 34 year history we’ve only recently engaged in the issues (dams and federal/state malfeasance) driving iconic Spring Chinook, Sockeye, and some of the largest steelhead on earth towards extinction. Of all the river basins we work in, the Snake, with millions of acres of pristine and near-pristine habitat in Idaho and Northeast Oregon, has the largest conservation and salmon recovery opportunity in North America. And, it is personal. Back in 1998, fresh out of graduate school at Cornell and determined to head west to work, fish and explore more of the places I had spent portions of my youth, I had the extreme good fortune of being offered a job by Gwen Carter, manager of the Nez Perce Tribe’s Water Resources Division, located in Lapwai, Idaho. Gwen had grown the program into a force for protecting the Nez Perce’s most important life source - clean water. I was thrilled by the opportunity to work for a proud people whose DNA is hard-wired to the lands, waters, plants, and animals of the Inland Northwest. In the Treaty of 1855, the Nez Perce ceded millions of acres of land to the United States but reserved the right to fish at all usual and accustomed places, and to hunt, gather roots and berries, and pasture horses and livestock on all open and unclaimed lands throughout their historic homelands. Faced with the inevitable expansion of the still-young United States, tribal leaders knew then that the future of their people, the Nimiipuu, was dependent on maintaining access to traditional life-sources and lifeways. The Tribe has been at the forefront of every major conservation initiative throughout their territory, including the reintroduction of grey wolves and large-scale salmon recovery efforts, while also fighting proposals that would undermine the ecosystems that support their way of life. The wisdom of the Nez Perce leaders who signed the Treaty of 1855 is reinforced each time a Nimiipuu digs Kouse roots in the spring, dip nets a Spring Chinook from a fast flowing tributary, brings down a bison in Yellowstone Country, or gathers huckleberries in the Bitteroots. It permeates the work of tribal leaders and staff who must contend with threats never envisioned when the treaty was signed, like hydropower dams and climate change. Over the next thirteen years, I learned much from the tribe and the people in my community. And the rivers that feed the lower Snake - the Salmon, Clearwater, Grande Ronde and Imnaha - seeped into my blood. Their seasonal rhythms dictated not only my work and free time, but also my relationship to people and place. As a “water and fish guy,” I was in my element. I learned how the vast system of federal and private dams have altered the flow, temperature, and species composition of the Snake and Columbia Rivers, driving salmon and lamprey towards extinction, and with it, the Nimipuu culture. Volume  08  No.  04  Summer  2021