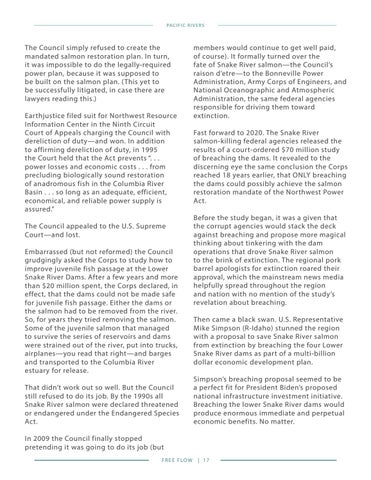 The Council simply refused to create the mandated salmon restoration plan. In turn, it was impossible to do the legally-required power plan, because it was supposed to be built on the salmon plan. (This yet to be successfully litigated, in case there are lawyers reading this.) Earthjustice filed suit for Northwest Resource Information Center in the Ninth Circuit Court of Appeals charging the Council with dereliction of duty—and won. In addition to affirming dereliction of duty, in 1995 the Court held that the Act prevents “. . . power losses and economic costs . . . from precluding biologically sound restoration of anadromous fish in the Columbia River Basin . . . so long as an adequate, efficient, economical, and reliable power supply is assured.” The Council appealed to the U.S. Supreme Court—and lost. Embarrassed (but not reformed) the Council grudgingly asked the Corps to study how to improve juvenile fish passage at the Lower Snake River Dams. After a few years and more than $20 million spent, the Corps declared, in effect, that the dams could not be made safe for juvenile fish passage. Either the dams or the salmon had to be removed from the river. So, for years they tried removing the salmon. Some of the juvenile salmon that managed to survive the series of reservoirs and dams were strained out of the river, put into trucks, airplanes—you read that right—and barges and transported to the Columbia River estuary for release. That didn’t work out so well. But the Council still refused to do its job. By the 1990s all Snake River salmon were declared threatened or endangered under the Endangered Species Act.

members would continue to get well paid, of course). It formally turned over the fate of Snake River salmon—the Council’s raison d’etre—to the Bonneville Power Administration, Army Corps of Engineers, and National Oceanographic and Atmospheric Administration, the same federal agencies responsible for driving them toward extinction. Fast forward to 2020. The Snake River salmon-killing federal agencies released the results of a court-ordered $70 million study of breaching the dams. It revealed to the discerning eye the same conclusion the Corps reached 18 years earlier, that ONLY breaching the dams could possibly achieve the salmon restoration mandate of the Northwest Power Act. Before the study began, it was a given that the corrupt agencies would stack the deck against breaching and propose more magical thinking about tinkering with the dam operations that drove Snake River salmon to the brink of extinction. The regional pork barrel apologists for extinction roared their approval, which the mainstream news media helpfully spread throughout the region and nation with no mention of the study’s revelation about breaching. Then came a black swan. U.S. Representative Mike Simpson (R-Idaho) stunned the region with a proposal to save Snake River salmon from extinction by breaching the four Lower Snake River dams as part of a multi-billion dollar economic development plan. Simpson’s breaching proposal seemed to be a perfect fit for President Biden’s proposed national infrastructure investment initiative. Breaching the lower Snake River dams would produce enormous immediate and perpetual economic benefits. No matter.