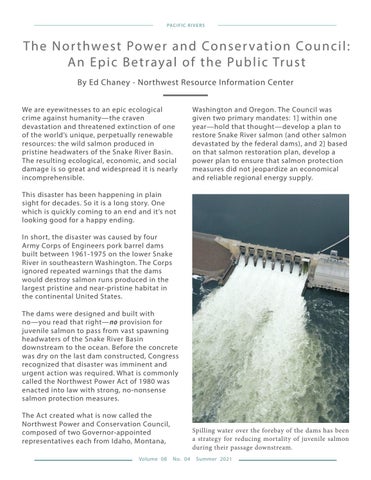 Washington and Oregon. The Council was given two primary mandates: 1] within one year—hold that thought—develop a plan to restore Snake River salmon (and other salmon devastated by the federal dams), and 2] based on that salmon restoration plan, develop a power plan to ensure that salmon protection measures did not jeopardize an economical and reliable regional energy supply.

This disaster has been happening in plain sight for decades. So it is a long story. One which is quickly coming to an end and it’s not looking good for a happy ending. In short, the disaster was caused by four Army Corps of Engineers pork barrel dams built between 1961-1975 on the lower Snake River in southeastern Washington. The Corps ignored repeated warnings that the dams would destroy salmon runs produced in the largest pristine and near-pristine habitat in the continental United States. The dams were designed and built with no—you read that right—no provision for juvenile salmon to pass from vast spawning headwaters of the Snake River Basin downstream to the ocean. Before the concrete was dry on the last dam constructed, Congress recognized that disaster was imminent and urgent action was required. What is commonly called the Northwest Power Act of 1980 was enacted into law with strong, no-nonsense salmon protection measures. The Act created what is now called the Northwest Power and Conservation Council, composed of two Governor-appointed representatives each from Idaho, Montana,

Spilling water over the forebay of the dams has been a strategy for reducing mortality of juvenile salmon during their passage downstream.