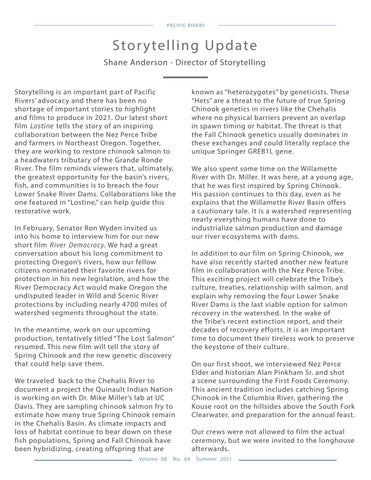 Sto r y tel l i n g Update Shane Anderson - Director of Storytelling Storytelling is an important part of Pacific Rivers’ advocacy and there has been no shortage of important stories to highlight and films to produce in 2021. Our latest short film Lostine tells the story of an inspiring collaboration between the Nez Perce Tribe and farmers in Northeast Oregon. Together, they are working to restore chinook salmon to a headwaters tributary of the Grande Ronde River. The film reminds viewers that, ultimately, the greatest opportunity for the basin’s rivers, fish, and communities is to breach the four Lower Snake River Dams. Collaborations like the one featured in “Lostine,” can help guide this restorative work. In February, Senator Ron Wyden invited us into his home to interview him for our new short film River Democracy. We had a great conversation about his long commitment to protecting Oregon’s rivers, how our fellow citizens nominated their favorite rivers for protection in his new legislation, and how the River Democracy Act would make Oregon the undisputed leader in Wild and Scenic River protections by including nearly 4700 miles of watershed segments throughout the state. In the meantime, work on our upcoming production, tentatively titled “The Lost Salmon” resumed. This new film will tell the story of Spring Chinook and the new genetic discovery that could help save them. We traveled back to the Chehalis River to document a project the Quinault Indian Nation is working on with Dr. Mike Miller’s lab at UC Davis. They are sampling chinook salmon fry to estimate how many true Spring Chinook remain in the Chehalis Basin. As climate impacts and loss of habitat continue to bear down on these fish populations, Spring and Fall Chinook have been hybridizing, creating offspring that are

known as “heterozygotes” by geneticists. These “Hets” are a threat to the future of true Spring Chinook genetics in rivers like the Chehalis where no physical barriers prevent an overlap in spawn timing or habitat. The threat is that the Fall Chinook genetics usually dominates in these exchanges and could literally replace the unique Springer GREB1L gene. We also spent some time on the Willamette River with Dr. Miller. It was here, at a young age, that he was first inspired by Spring Chinook. His passion continues to this day, even as he explains that the Willamette River Basin offers a cautionary tale. It is a watershed representing nearly everything humans have done to industrialize salmon production and damage our river ecosystems with dams. In addition to our film on Spring Chinook, we have also recently started another new feature film in collaboration with the Nez Perce Tribe. This exciting project will celebrate the Tribe’s culture, treaties, relationship with salmon, and explain why removing the four Lower Snake River Dams is the last viable option for salmon recovery in the watershed. In the wake of the Tribe’s recent extinction report, and their decades of recovery efforts, it is an important time to document their tireless work to preserve the keystone of their culture. On our first shoot, we interviewed Nez Perce Elder and historian Alan Pinkham Sr. and shot a scene surrounding the First Foods Ceremony. This ancient tradition includes catching Spring Chinook in the Columbia River, gathering the Kouse root on the hillsides above the South Fork Clearwater, and preparation for the annual feast. Our crews were not allowed to film the actual ceremony, but we were invited to the longhouse afterwards.