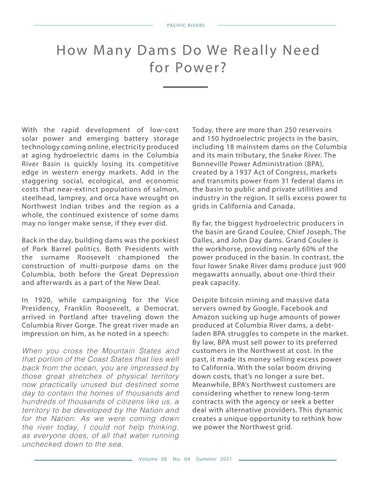 With the rapid development of low-cost solar power and emerging battery storage technology coming online, electricity produced at aging hydroelectric dams in the Columbia River Basin is quickly losing its competitive edge in western energy markets. Add in the staggering social, ecological, and economic costs that near-extinct populations of salmon, steelhead, lamprey, and orca have wrought on Northwest Indian tribes and the region as a whole, the continued existence of some dams may no longer make sense, if they ever did. Back in the day, building dams was the porkiest of Pork Barrel politics. Both Presidents with the surname Roosevelt championed the construction of multi-purpose dams on the Columbia, both before the Great Depression and afterwards as a part of the New Deal. In 1920, while campaigning for the Vice Presidency, Franklin Roosevelt, a Democrat, arrived in Portland after traveling down the Columbia River Gorge. The great river made an impression on him, as he noted in a speech: When you cross the Mountain States and that portion of the Coast States that lies well back from the ocean, you are impressed by those great stretches of physical territory now practically unused but destined some day to contain the homes of thousands and hundreds of thousands of citizens like us, a territory to be developed by the Nation and for the Nation. As we were coming down the river today, I could not help thinking, as everyone does, of all that water running unchecked down to the sea.

Today, there are more than 250 reservoirs and 150 hydroelectric projects in the basin, including 18 mainstem dams on the Columbia and its main tributary, the Snake River. The Bonneville Power Administration (BPA), created by a 1937 Act of Congress, markets and transmits power from 31 federal dams in the basin to public and private utilities and industry in the region. It sells excess power to grids in California and Canada. By far, the biggest hydroelectric producers in the basin are Grand Coulee, Chief Joseph, The Dalles, and John Day dams. Grand Coulee is the workhorse, providing nearly 60% of the power produced in the basin. In contrast, the four lower Snake River dams produce just 900 megawatts annually, about one-third their peak capacity. Despite bitcoin mining and massive data servers owned by Google, Facebook and Amazon sucking up huge amounts of power produced at Columbia River dams, a debtladen BPA struggles to compete in the market. By law, BPA must sell power to its preferred customers in the Northwest at cost. In the past, it made its money selling excess power to California. With the solar boom driving down costs, that’s no longer a sure bet. Meanwhile, BPA’s Northwest customers are considering whether to renew long-term contracts with the agency or seek a better deal with alternative providers. This dynamic creates a unique opportunity to rethink how we power the Northwest grid.