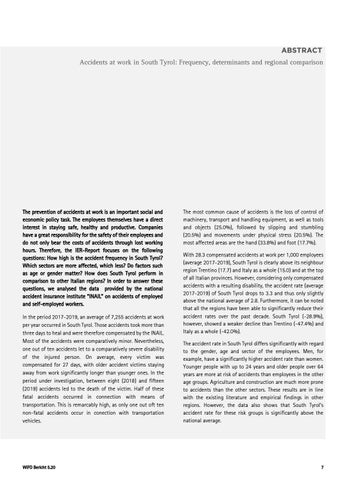 The prevention of accidents at work is an important social and economic policy task. The employees themselves have a direct interest in staying safe, healthy and productive. Companies have a great responsibility for the safety of their employees and do not only bear the costs of accidents through lost working hours. Therefore, the IER-Report focuses on the following questions: How high is the accident frequency in South Tyrol? Which sectors are more affected, which less? Do factors such as age or gender matter? How does South Tyrol perform in comparison to other Italian regions? In order to answer these questions, we analysed the data provided by the national accident insurance institute â&#x20AC;&#x153;INAILâ&#x20AC;? on accidents of employed and self-employed workers. In the period 2017-2019, an average of 7,255 accidents at work per year occurred in South Tyrol. Those accidents took more than three days to heal and were therefore compensated by the INAIL. Most of the accidents were comparatively minor. Nevertheless, one out of ten accidents let to a comparatively severe disability of the injured person. On average, every victim was compensated for 27 days, with older accident victims staying away from work significantly longer than younger ones. In the period under investigation, between eight (2018) and fifteen (2019) accidents led to the death of the victim. Half of these fatal accidents occurred in connection with means of transportation. This is remarcably high, as only one out oft ten non-fatal accidents occur in conection with transportation vehicles.

The most common cause of accidents is the loss of control of machinery, transport and handling equipment, as well as tools and objects (25.0%), followed by slipping and stumbling (20.5%) and movements under physical stress (20.5%). The most affected areas are the hand (33.8%) and foot (17.7%). With 28.3 compensated accidents at work per 1,000 employees (average 2017-2019), South Tyrol is clearly above its neighbour region Trentino (17.7) and Italy as a whole (15.0) and at the top of all Italian provinces. However, considering only compensated accidents with a resulting disability, the accident rate (average 2017-2019) of South Tyrol drops to 3.3 and thus only slightly above the national average of 2.8. Furthermore, it can be noted that all the regions have been able to significantly reduce their accident rates over the past decade. South Tyrol (-28.9%), however, showed a weaker decline than Trentino (-47.4%) and Italy as a whole (-42.0%). The accident rate in South Tyrol differs significantly with regard to the gender, age and sector of the employees. Men, for example, have a significantly higher accident rate than women. Younger people with up to 24 years and older people over 64 years are more at risk of accidents than employees in the other age groups. Agriculture and construction are much more prone to accidents than the other sectors. These results are in line with the existing literature and empirical findings in other regions. However, the data also shows that South Tyrol's accident rate for these risk groups is significantly above the national average.

The reasons for the higher frequency of accidents in South Tyrol can only be presumed: 

For example, the cultivation of steep slopes and ranges in mountain farming is likely to significantly increase the probability of accidents in the agricultural sector. Due to the division of real estate in Roman inheritance law, many agricultural enterprises in the rest of the country, unlike in South Tyrol (closed farm), do not reach the minimum processing size of 104 day shifts per insured person. As a consequence, these accidents are often listed as leisure time accidents and not as work accidents like in South Tyrol. Moreover, due to the dual training system, South Tyrol has a relatively higher number of young and inexperienced employees. This could also explain the above-average accident risk of younger people. Furthermore, there is also the suspicion that the high accident rates in South Tyrol are partly due to culturally influenced lower willingness of employees to implement safety measures. Last but not least, the monitoring of occupational safety might be less intensive in South Tyrol compared to other Italian regions.

In order to confirm these assumptions and to find further explanations, it is necessary to improve access to the data of public institutions. Above all, however, the social partners must engage in a joint dialogue to better explain and understand the reasons for the higher accident frequency in South Tyrol. This is the only way to develop relevant recommendations for further action, such as better information and training of certain groups of workers, strengthening safety measures, etc.