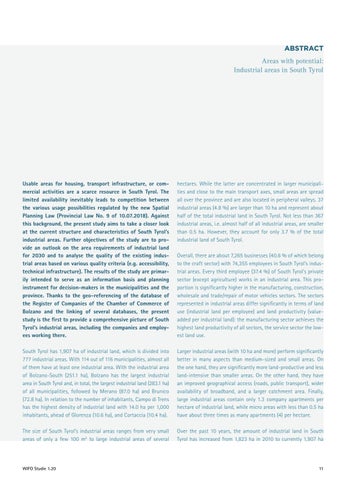 Usable areas for housing, transport infrastructure, or commercial activities are a scarce resource in South Tyrol. The limited availability inevitably leads to competition between the various usage possibilities regulated by the new Spatial Planning Law (Provincial Law No. 9 of 10.07.2018). Against this background, the present study aims to take a closer look at the current structure and characteristics of South Tyrol’s industrial areas. Further objectives of the study are to provide an outlook on the area requirements of industrial land for 2030 and to analyse the quality of the existing industrial areas based on various quality criteria (e.g. accessibility, technical infrastructure). The results of the study are primarily intended to serve as an information basis and planning instrument for decision-makers in the municipalities and the province. Thanks to the geo-referencing of the database of the Register of Companies of the Chamber of Commerce of Bolzano and the linking of several databases, the present study is the first to provide a comprehensive picture of South Tyrol’s industrial areas, including the companies and employees working there.

Larger industrial areas (with 10 ha and more) perform significantly better in many aspects than medium-sized and small areas. On the one hand, they are significantly more land-productive and less land-intensive than smaller areas. On the other hand, they have an improved geographical access (roads, public transport), wider availability of broadband, and a larger catchment area. Finally, large industrial areas contain only 1.3 company apartments per hectare of industrial land, while micro areas with less than 0.5 ha have about three times as many apartments (4) per hectare.

Overall, there are about 7,265 businesses (40.6 % of which belong to the craft sector) with 74,355 employees in South Tyrol’s industrial areas. Every third employee (37.4 %) of South Tyrol’s private sector (except agriculture) works in an industrial area. This proportion is significantly higher in the manufacturing, construction, wholesale and trade/repair of motor vehicles sectors. The sectors represented in industrial areas differ significantly in terms of land use (industrial land per employee) and land productivity (valueadded per industrial land): the manufacturing sector achieves the highest land productivity of all sectors, the service sector the lowest land use.

(+4.6 %). Two scenarios, based on the population forecast for 2030 and two different assumptions regarding the future economic structure, result in a slight decrease in the area requirements of industrial land of 1.5% (assuming the economic structure remains unchanged) and a slightly more pronounced decrease of 6.3% (extrapolating past developments of the economic structure). The following recommendations for the planning of industrial areas are derived from the results of the study: &gt; Considering the supra-municipal importance of industrial areas: The significance of an industrial area goes far beyond the respective municipal boundaries. For this reason, it is necessary to arrange the planning and further development of industrial areas towards functional areas. In the case of small and medium-sized industrial areas, these can be the 25 optimum catchment areas defined at province level for intermunicipal cooperation. For large industrial areas, on the other hand, spatial planning should be conducted at least at the district level, if not at the province level. &gt; Increasing the flexibility of unused existing areas and conducting active land management: Before considering the designation of industrial lands, the top priority should be to make optimum use of existing, under-utilised areas. Here the public authorities at the province level are called upon to support the further development and revitalisation of industrial land. By setting up a risk capital fund, for example, unused land could be purchased, improved, and made available to