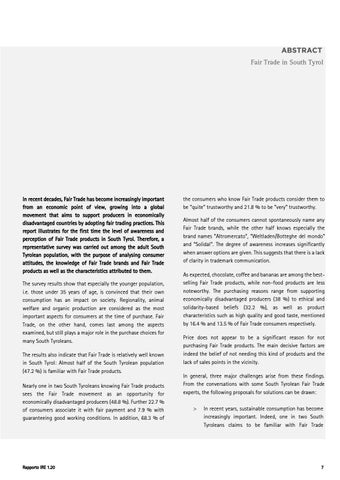 In recent decades, Fair Trade has become increasingly important from an economic point of view, growing into a global movement that aims to support producers in economically disadvantaged countries by adopting fair trading practices. This report illustrates for the first time the level of awareness and perception of Fair Trade products in South Tyrol. Therefore, a representative survey was carried out among the adult South Tyrolean population, with the purpose of analysing consumer attitudes, the knowledge of Fair Trade brands and Fair Trade products as well as the characteristics attributed to them. The survey results show that especially the younger population, i.e. those under 35 years of age, is convinced that their own consumption has an impact on society. Regionality, animal welfare and organic production are considered as the most important aspects for consumers at the time of purchase. Fair Trade, on the other hand, comes last among the aspects examined, but still plays a major role in the purchase choices for many South Tyroleans. The results also indicate that Fair Trade is relatively well known in South Tyrol: Almost half of the South Tyrolean population (47.2 %) is familiar with Fair Trade products. Nearly one in two South Tyroleans knowing Fair Trade products sees the Fair Trade movement as an opportunity for economically disadvantaged producers (48.8 %). Further 22.7 % of consumers associate it with fair payment and 7.9 % with guaranteeing good working conditions. In addition, 68.3 % of

the consumers who know Fair Trade products consider them to be "quite" trustworthy and 21.8 % to be "very" trustworthy. Almost half of the consumers cannot spontaneously name any Fair Trade brands, while the other half knows especially the brand names "Altromercato", "Weltladen/Botteghe del mondo" and "Solidal". The degree of awareness increases significantly when answer options are given. This suggests that there is a lack of clarity in trademark communication. As expected, chocolate, coffee and bananas are among the bestselling Fair Trade products, while non-food products are less noteworthy. The purchasing reasons range from supporting economically disadvantaged producers (38 %) to ethical and solidarity-based beliefs (32.2 %), as well as product characteristics such as high quality and good taste, mentioned by 16.4 % and 13.5 % of Fair Trade consumers respectively. Price does not appear to be a significant reason for not purchasing Fair Trade products. The main decisive factors are indeed the belief of not needing this kind of products and the lack of sales points in the vicinity. In general, three major challenges arise from these findings. From the conversations with some South Tyrolean Fair Trade experts, the following proposals for solutions can be drawn: ď&#x20AC;ž

In recent years, sustainable consumption has become increasingly important. Indeed, one in two South Tyroleans claims to be familiar with Fair Trade

products. According to the experts, more intensive public relations activities and more frequent sensitization measures could further increase the degree of awareness of Fair Trade. In addition, more cooperation with several South Tyrolean economic players (e.g. public administration, retailers) would be appreciated. The many different Fair Trade brands are causing confusion among consumers. More clarity and uniformity would be desirable in order to facilitate the recognition of Fair Trade products. The interview partners state that standardization has already been sought at a global level. However, implementing such a standardization is not straightforward, as there is no official legislation regulating the Fair Trade sector. Hence, the local Fair Trade Shops should become more prominent in their function as specialist retailers for Fair Trade products and should continue to provide information and expert advice to consumers. At first glance, the concepts of Fair Trade and regionality may appear to be incompatible or contradictory, but the experts believe that there is a potential for cooperation or synergies.