ABSTRACT: Economic analysis of the Autonomous Province of Bolzano/Bozen budget 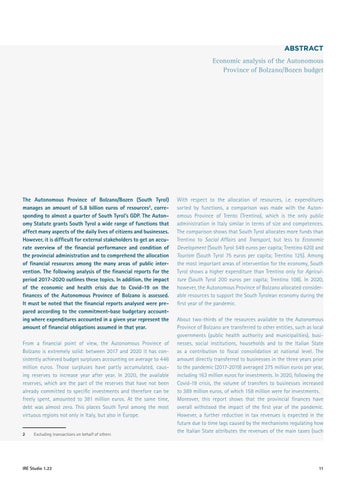 ABSTRACT Economic analysis of the Autonomous Province of Bolzano/Bozen budget

The Autonomous Province of Bolzano/Bozen (South Tyrol) manages an amount of 5.8 billion euros of resources2, corresponding to almost a quarter of South Tyrol’s GDP. The Autonomy Statute grants South Tyrol a wide range of functions that affect many aspects of the daily lives of citizens and businesses. However, it is difficult for external stakeholders to get an accurate overview of the financial performance and condition of the provincial administration and to comprehend the allocation of financial resources among the many areas of public intervention. The following analysis of the financial reports for the period 2017-2020 outlines these topics. In addition, the impact of the economic and health crisis due to Covid-19 on the finances of the Autonomous Province of Bolzano is assessed. It must be noted that the financial reports analysed were prepared according to the commitment-base budgetary accounting where expenditures accounted in a given year represent the amount of financial obligations assumed in that year. From a financial point of view, the Autonomous Province of Bolzano is extremely solid: between 2017 and 2020 it has consistently achieved budget surpluses accounting on average to 446 million euros. Those surpluses have partly accumulated, causing reserves to increase year after year. In 2020, the available reserves, which are the part of the reserves that have not been already committed to specific investments and therefore can be freely spent, amounted to 381 million euros. At the same time, debt was almost zero. This places South Tyrol among the most virtuous regions not only in Italy, but also in Europe. 2

Excluding transactions on behalf of others

With respect to the allocation of resources, i.e. expenditures sorted by functions, a comparison was made with the Autonomous Province of Trento (Trentino), which is the only public administration in Italy similar in terms of size and competences. The comparison shows that South Tyrol allocates more funds than Trentino to Social Affairs and Transport, but less to Economic Development (South Tyrol 549 euros per capita; Trentino 620) and Tourism (South Tyrol 75 euros per capita; Trentino 125). Among the most important areas of intervention for the economy, South Tyrol shows a higher expenditure than Trentino only for Agriculture (South Tyrol 200 euros per capita; Trentino 108). In 2020, however, the Autonomous Province of Bolzano allocated considerable resources to support the South Tyrolean economy during the first year of the pandemic. About two-thirds of the resources available to the Autonomous Province of Bolzano are transferred to other entities, such as local governments (public health authority and municipalities), businesses, social institutions, households and to the Italian State as a contribution to fiscal consolidation at national level. The amount directly transferred to businesses in the three years prior to the pandemic (2017-2019) averaged 275 million euros per year, including 163 million euros for investments. In 2020, following the Covid-19 crisis, the volume of transfers to businesses increased to 389 million euros, of which 158 million were for investments. Moreover, this report shows that the provincial finances have overall withstood the impact of the first year of the pandemic. However, a further reduction in tax revenues is expected in the future due to time lags caused by the mechanisms regulating how the Italian State attributes the revenues of the main taxes (such

as IRPEF - personal income tax, IRES - corporate income tax and IVA - value added tax) to the Autonomous Province of Bolzano. It is therefore necessary to further study the dynamics that regulate South Tyrol’s tax revenues, in order to understand how the economic cycle will affect future budgets. Finally, our analysis points out that the provincial budget essentially represents an instrument for the authorisation and prudent management of public expenditures, rather than for accountability and policymaking. This ensures the sustainability of the implemented economic policies and is conducive to good management of public resources but makes budget documents less informative for political discussion and external stakeholders. Indeed, resources allocated by the budget to the various departments of the provincial administration are often much lower than those actually available during the year. This also leads to difficulties for various provincial departments, which need to plan their expenditure considering the additional resources that will become available during the year. In order to maximise the operational efficiency of the administration, it would therefore be desirable to reduce the gap between the forecasts in the budget and the resources that actually will be available.

This report highlights a further limitation of the financial reports, namely the lack of information they provide on the actual dynamics over time of the investments and the resources allocated to them. This is due to the use made by the Autonomous Province of Bolzano of the Fondo pluriennale vincolato – FPV, a particular accounting mechanism which aims to report the amount of reserves that will cover future expenditures: in each financial year, most resources of the FPV are allocated to the current year itself, and very few to the following years, regardless of when the related expenditures are likely to occur. The advantage of this approach is that the resources provided by the FPV are immediately available to the administration for expenditure. However, at the same time it also reduces the information provided by the FPV on the expected timing of investments. In fact, it systematically happens that a substantial part of these resources is not actually spent during the year and is therefore reallocated to subsequent years. As a result, the link between financial planning and the actual spending of resources (determined by the progress of works) is lost. Moreover, the usefulness of the financial report as a controlling tool to monitor the development of investment projects and the compliance with the operational programmes is weakened as well.

ABSTRACT: Economic analysis of the Autonomous Province of Bolzano/Bozen budget