ABSTRACT: The economic importance of culture in South Tyrol 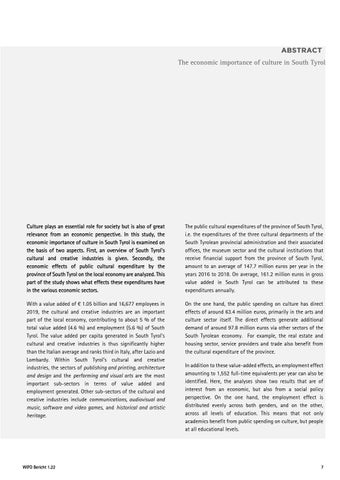 The economic importance of culture in South Tyrol

Culture plays an essential role for society but is also of great relevance from an economic perspective. In this study, the economic importance of culture in South Tyrol is examined on the basis of two aspects. First, an overview of South Tyrol&#39;s cultural and creative industries is given. Secondly, the economic effects of public cultural expenditure by the province of South Tyrol on the local economy are analyzed. This part of the study shows what effects these expenditures have in the various economic sectors.

On the one hand, the public spending on culture has direct effects of around 63.4 million euros, primarily in the arts and culture sector itself. The direct effects generate additional demand of around 97.8 million euros via other sectors of the South Tyrolean economy. For example, the real estate and housing sector, service providers and trade also benefit from the cultural expenditure of the province.

In addition to these value-added effects, an employment effect amounting to 1,552 full-time equivalents per year can also be identified. Here, the analyses show two results that are of interest from an economic, but also from a social policy perspective. On the one hand, the employment effect is distributed evenly across both genders, and on the other, across all levels of education. This means that not only academics benefit from public spending on culture, but people at all educational levels.

The following conclusions can be drawn from the results of the study:  South Tyrol&#39;s cultural and creative industry is a multilayered, broad-based sector. Measured in terms of value added per inhabitant, South Tyrol&#39;s cultural and creative industry is significantly above the Italian average and therefore deserve a higher status in the public perception.  Due to the strong interconnections of the cultural sector with other economic sectors, a strengthening of public funding for culture benefits not only cultural workers directly, but indirectly the entire local economy.  Effects of culture can also be societal or social in nature and thus indirectly influencing the local economy. For example, a rich offer of art and culture increases the attractiveness of a region and can thus contribute to making the province of South Tyrol more attractive both for highly qualified workers and for tourists.  Culture also leads to greater life satisfaction and social participation among the population and contributes to the personality development of children and young people. All these effects of culture ultimately result in an increase in the innovative performance, productivity and competitiveness, and thus contribute to the prosperity of a region in the long term.

Based on the study results and the conclusions drawn from them, the following measures and recommendations for action can be considered for the representatives and stakeholders of cultural policy and the local public administration:  The Corona crisis has exposed the risks for cultural workers, who are often characterized by precarious employment and false self-employment. In this context, the existing measures for cultural institutions and cultural workers must be continued and expanded by the province. In addition to the existing measures, it could be considered to providing financial support to cultural workers who are temporarily unable to carry out their activities via a solidarity fund.  When distributing funding in the cultural sector, it is important to achieve a high level of efficiency and effectiveness. To this end, the public administration could conduct more evaluation programs. These should clarify what exactly the goals of cultural funding are and how these can be measured.  Volunteers play a key role in the creation of cultural services. However, liability regulations in volunteerism and new legal regulations for the organization and administration of associationsthreaten the vitality of the local associations. Legal changes are needed here to ensure the continued existence of voluntary work.

ABSTRACT: The economic importance of culture in South Tyrol