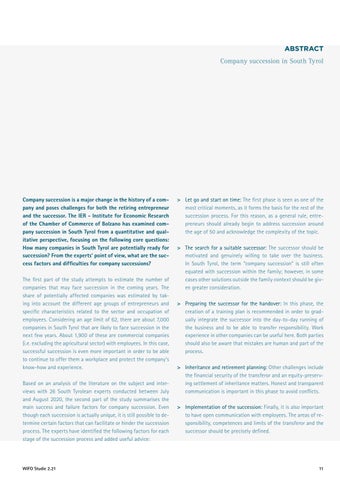 Company succession is a major change in the history of a company and poses challenges for both the retiring entrepreneur and the successor. The IER - Institute for Economic Research of the Chamber of Commerce of Bolzano has examined company succession in South Tyrol from a quantitative and qualitative perspective, focusing on the following core questions: How many companies in South Tyrol are potentially ready for succession? From the experts‘ point of view, what are the success factors and difficulties for company successions? The first part of the study attempts to estimate the number of companies that may face succession in the coming years. The share of potentially affected companies was estimated by taking into account the different age groups of entrepreneurs and specific characteristics related to the sector and occupation of employees. Considering an age limit of 62, there are about 7,000 companies in South Tyrol that are likely to face succession in the next few years. About 1,900 of these are commercial companies (i.e. excluding the agricultural sector) with employees. In this case, successful succession is even more important in order to be able to continue to offer them a workplace and protect the company‘s know-how and experience. Based on an analysis of the literature on the subject and interviews with 26 South Tyrolean experts conducted between July and August 2020, the second part of the study summarises the main success and failure factors for company succession. Even though each succession is actually unique, it is still possible to determine certain factors that can facilitate or hinder the succession process. The experts have identified the following factors for each stage of the succession process and added useful advice:

> Let go and start on time: The first phase is seen as one of the most critical moments, as it forms the basis for the rest of the succession process. For this reason, as a general rule, entrepreneurs should already begin to address succession around the age of 50 and acknowledge the complexity of the topic. > The search for a suitable successor: The successor should be motivated and genuinely willing to take over the business. In South Tyrol, the term “company succession” is still often equated with succession within the family; however, in some cases other solutions outside the family context should be given greater consideration. > Preparing the successor for the handover: In this phase, the creation of a training plan is recommended in order to gradually integrate the successor into the day-to-day running of the business and to be able to transfer responsibility. Work experience in other companies can be useful here. Both parties should also be aware that mistakes are human and part of the process. > Inheritance and retirement planning: Other challenges include the financial security of the transferor and an equity-preserving settlement of inheritance matters. Honest and transparent communication is important in this phase to avoid conflicts. > Implementation of the succession: Finally, it is also important to have open communication with employees. The areas of responsibility, competences and limits of the transferor and the successor should be precisely defined.

Comparison with surveys from previous years shows that the challenges during the succession process have barely changed for entrepreneurs. Consequently, the following recommendations to economic policy can be renewed: > Create networks between experts in the field of company succession and place greater emphasis in consultations on the fact that succession requires long-term preparation. > Offer courses and lectures on the topic of company succession tailored to the different target groups. > Create suitable networking opportunities and exchange possibilities dedicated to transferors and successors. > Awareness-raising and information work should always be complemented by concrete examples of successful successions.