ABSRACT: Handicraft in South Tyrol - between tradition and digitalization 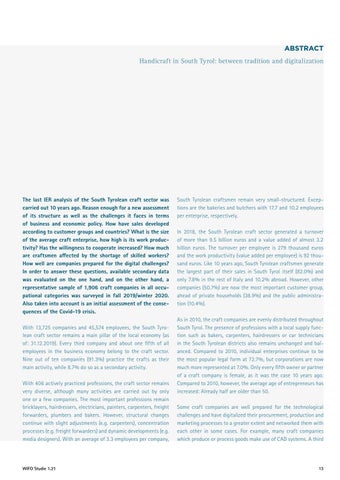 ABSTRACT Handicraft in South Tyrol: between tradition and digitalization

The last IER analysis of the South Tyrolean craft sector was carried out 10 years ago. Reason enough for a new assessment of its structure as well as the challenges it faces in terms of business and economic policy. How have sales developed according to customer groups and countries? What is the size of the average craft enterprise, how high is its work productivity? Has the willingness to cooperate increased? How much are craftsmen affected by the shortage of skilled workers? How well are companies prepared for the digital challenges? In order to answer these questions, available secondary data was evaluated on the one hand, and on the other hand, a representative sample of 1,906 craft companies in all occupational categories was surveyed in fall 2019/winter 2020. Also taken into account is an initial assessment of the consequences of the Covid-19 crisis. With 13,725 companies and 45,574 employees, the South Tyrolean craft sector remains a main pillar of the local economy (as of: 31.12.2019). Every third company and about one fifth of all employees in the business economy belong to the craft sector. Nine out of ten companies (91.3%) practice the crafts as their main activity, while 8.7% do so as a secondary activity. With 406 actively practiced professions, the craft sector remains very diverse, although many activities are carried out by only one or a few companies. The most important professions remain bricklayers, hairdressers, electricians, painters, carpenters, freight forwarders, plumbers and bakers. However, structural changes continue with slight adjustments (e.g. carpenters), concentration processes (e.g. freight forwarders) and dynamic developments (e.g. media designers). With an average of 3.3 employees per company,

South Tyrolean craftsmen remain very small-structured. Exceptions are the bakeries and butchers with 17.7 and 10.2 employees per enterprise, respectively. In 2018, the South Tyrolean craft sector generated a turnover of more than 9.5 billion euros and a value added of almost 3.2 billion euros. The turnover per employee is 279 thousand euros and the work productivity (value added per employee) is 92 thousand euros. Like 10 years ago, South Tyrolean craftsmen generate the largest part of their sales in South Tyrol itself (82.0%) and only 7.8% in the rest of Italy and 10.2% abroad. However, other companies (50.7%) are now the most important customer group, ahead of private households (38.9%) and the public administration (10.4%). As in 2010, the craft companies are evenly distributed throughout South Tyrol. The presence of professions with a local supply function such as bakers, carpenters, hairdressers or car technicians in the South Tyrolean districts also remains unchanged and balanced. Compared to 2010, individual enterprises continue to be the most popular legal form at 72.7%, but corporations are now much more represented at 7.0%. Only every fifth owner or partner of a craft company is female, as it was the case 10 years ago. Compared to 2010, however, the average age of entrepreneurs has increased: Already half are older than 50. Some craft companies are well prepared for the technological challenges and have digitalized their procurement, production and marketing processes to a greater extent and networked them with each other in some cases. For example, many craft companies which produce or process goods make use of CAD systems. A third

of craftsmen who carry out repairs use assistance systems for fault diagnosis. In marketing, 56.5% rely on their own website and 42.9% on social media. Overall, however, many companies are not aware of the technical possibilities and numerous technologies, for example 3-D printing/scanning or new methods for the visual product presentation are correspondingly rarely used. A major challenge for the South Tyrolean craft sector continues to be the shortage of skilled workers. Two thirds of the craftsmen have difficulties finding sufficiently qualified skilled workers. In order to deal with this, craftsmen are increasingly but still rarely using innovative recruitment methods (e.g. social media) or offering flexible working time models and systemic training opportunities. Also due to the bureaucratic restrictions, only one out of ten craftsmen (12.7%) offered apprenticeship training in 2018. Similarly to the situation 10 years ago, cooperation with other companies is often only sporadic for the processing of single orders. Genuine cooperations, which are also regulated in writing and/or with a separate company, are still very rare. In addition, 14.3% of the craft companies are currently looking for commercial space but are having difficulty finding it. South Tyrolean craftsmen are generally very satisfied with the transport infrastructure. According their view, however, the construction of further road bypasses and an improved access to the towns and villages would be necessary. The very positive economic development in the craft sector in recent years was abruptly interrupted by the Covid-19 crisis at the beginning of 2020. For example, half of the craftsmen lost more than 50% of their revenues in April 2020 compared to the same

month of the previous year. However, the medium- and long-term consequences are not yet predictable. Summing up, many challenges that were already emphasized in the last study are still relevant. This calls for action from craftsmen, their representatives as well as from the public administration: &gt; The transition to the digital craft company: Digitalization offers many opportunities for more efficient business organization and marketing. Without a website or the use of social media, for example, contemporary marketing is no longer possible. Customers also increasingly expect a virtual illustration of products and services even before they are created. A great deal of potential for more efficient operations also lies in the increasing digital networking of supply and production processes. The small-structured South Tyrolean craftsmen are already on the right track, but they need to make even greater use of these opportunities. The representatives of the craftsmen have a special role to play here in educating the companies even more and preparing them for the various digital and technological challenges. &gt; Addressing actively the shortage of skilled workers: In order to face the shortage of skilled workers, the craftsmen have to make use of all opportunities to retain young, qualified people as early as possible. It makes sense, for example, to participate in career fairs and to work more closely with schools to get more school leavers interested in crafts. Increased awareness-raising work by vocational representatives in schools is also needed. Above all, however, crafts-

men should not allow themselves to be dissuaded by bureaucratic obstacles and forego their most important instrument for binding young people to the company at an early stage and in the long term: namely offering apprenticeships. The public administration should also provide specific incentives to additionally promote the availability of apprenticeships. Finally, craftsmen also need to emphasize more the existing career opportunities in their companies and further expand the offer of flexible working hours and systematic training opportunities. &gt; Tapping markets outside South Tyrol more strongly: As the last study has also emphasized, it remains important to increasingly develop markets outside of South Tyrol in order to increase productivity and reduce sales risk. However, South Tyrol&#39;s craft sector has only in parts succeeded in expanding their markets outside the province in recent years. Yet the high quality of craft services offers good sales opportunities both in other Italian regions and in neighboring countries. &gt; Increase willingness to cooperate: There has also been little improvement regarding the cooperation activities of South Tyrolean craftsmen. This is a cause for concern, because customers increasingly request turnkey solutions that a small craftsman can only provide in cooperation with other companies. Those craft enterprises that already successfully run cooperative projects can also serve as role models.

&gt; Tackling succession at an early stage: Due to the rising average age of entrepreneurs, more and more craftsmen will be facing succession in the future. In this context, craftsmen are not only challenged by having to plan the handover as early as possible but are also increasingly looking for alternatives for in-family solutions, such as handing over to a cooperation partner or a suitable employee. &gt; The special responsibility of the public administration: The South Tyrolean government can contribute considerably in order to shape the framework conditions in a way that local craftsmen can work well and master these challenges by means of a clear regional planning policy, a full-coverage supply of broadband as well as modern transport infrastructures. &gt; Public tenders play a very important role. For example, the willingness to cooperate could be increased by giving bidding consortiums more points in public tenders than general contractors. Similarly, apprenticeships could be rewarded and therefore encouraged. Finally, public tenders must provide low-threshold access for small-structured craftsmen. &gt; Similar to what has already been implemented for startup companies, specific funding could also be considered for innovative cooperation projects. &gt; It would also make sense to significantly &quot;slim down&quot; the list of professions, which is very extensive and unnecessarily fragmented with 467 entries. Therefore, a revi-

sion of the responsibilities and the standardization of the existing regulations seems appropriate. &gt; Finally, the formation at vocational schools should be further modernized and adapted to the needs. This can increase the attractiveness of vocational education and would also be a concrete contribution to reducing the shortage of skilled workers.

ABSRACT: Handicraft in South Tyrol - between tradition and digitalization