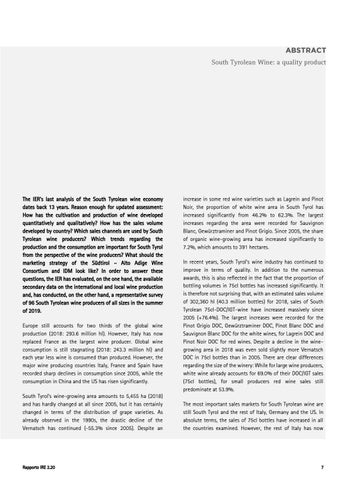 The IER&#39;s last analysis of the South Tyrolean wine economy dates back 13 years. Reason enough for updated assessment: How has the cultivation and production of wine developed quantitatively and qualitatively? How has the sales volume developed by country? Which sales channels are used by South Tyrolean wine producers? Which trends regarding the production and the consumption are important for South Tyrol from the perspective of the wine producers? What should the marketing strategy of the Südtirol – Alto Adige Wine Consortium and IDM look like? In order to answer these questions, the IER has evaluated, on the one hand, the available secondary data on the international and local wine production and, has conducted, on the other hand, a representative survey of 96 South Tyrolean wine producers of all sizes in the summer of 2019. Europe still accounts for two thirds of the global wine production (2018: 293.6 million hl). However, Italy has now replaced France as the largest wine producer. Global wine consumption is still stagnating (2018: 243.3 million hl) and each year less wine is consumed than produced. However, the major wine producing countries Italy, France and Spain have recorded sharp declines in consumption since 2005, while the consumption in China and the US has risen significantly. South Tyrol&#39;s wine-growing area amounts to 5,455 ha (2018) and has hardly changed at all since 2005, but it has certainly changed in terms of the distribution of grape varieties. As already observed in the 1990s, the drastic decline of the Vernatsch has continued (-55.3% since 2005). Despite an

increase in some red wine varieties such as Lagrein and Pinot Noir, the proportion of white wine area in South Tyrol has increased significantly from 46.2% to 62.3%. The largest increases regarding the area were recorded for Sauvignon Blanc, Gewürztraminer and Pinot Grigio. Since 2005, the share of organic wine-growing area has increased significantly to 7.2%, which amounts to 391 hectares. In recent years, South Tyrol&#39;s wine industry has continued to improve in terms of quality. In addition to the numerous awards, this is also reflected in the fact that the proportion of bottling volumes in 75cl bottles has increased significantly. It is therefore not surprising that, with an estimated sales volume of 302,360 hl (40.3 million bottles) for 2018, sales of South Tyrolean 75cl-DOC/IGT-wine have increased massively since 2005 (+76.4%). The largest increases were recorded for the Pinot Grigio DOC, Gewürztraminer DOC, Pinot Blanc DOC and Sauvignon Blanc DOC for the white wines, for Lagrein DOC and Pinot Noir DOC for red wines. Despite a decline in the winegrowing area in 2018 was even sold slightly more Vernatsch DOC in 75cl bottles than in 2005. There are clear differences regarding the size of the winery: While for large wine producers, white wine already accounts for 69.0% of their DOC/IGT sales (75cl bottles), for small producers red wine sales still predominate at 53.9%. The most important sales markets for South Tyrolean wine are still South Tyrol and the rest of Italy, Germany and the US. In absolute terms, the sales of 75cl bottles have increased in all the countries examined. However, the rest of Italy has now

replaced South Tyrol as the most important sales market. Overall, South Tyrol&#39;s wine, especially its white wine, has become more international, and many new countries such as the Benelux countries, Russia, Canada, and Japan have also been successfully opened up. This is especially true for the large South Tyrolean wine producers, while the small producers mainly serve the local market. South Tyrolean wine producers see the greatest growth potential, regardless of their dimension, for Great Britain, while large producers also see potential for South Tyrol and the rest of Italy and Austria, medium-sized producers for South Tyrol and Hong Kong and small producers for Canada, Russia and Hong Kong. Almost half of the 75cl-DOC/IGT bottles (46.1%) were sold to hotels, restaurants and cafés (HORECA) in 2018. Another important sales channel (22.4 %) is the specialised trade in wine shops. The producers believe that these two sales channels will remain important in the future. For large producers, food retailing also plays a role, although producers tend to expect this sales channel to decline. Small producers often rely on the in-house wine shop and this sales channel will also remain important in the future. Online trade, on the other hand, plays only a minor role and only for certain countries such as Italy or Germany an increase is expected for the future. According to the South Tyrolean producers, the greatest challenge for the future is a sustainable wine production. In addition, producers of all dimensions agree on the increasing importance of wines from single vineyards. Varying according to the dimensions, trends such as online trade and screw caps are considered more or less relevant. In contrast, trends such as kosher wines, glass caps, bag-in-box packaging or vegan wines are not relevant from the producer&#39;s point of view. Al in all, the South Tyrolean producers are very satisfied with the reliable and professional work of the Südtirol - Alto Adige Wine Consortium and the IDM. Most of the companies would like these organizations to promote the existing markets more intensively. With regard to the clients, large and medium-sized producers expect a focus on B2B, while small producers find both B2B and B2C contacts important. In terms of promotional tools, a strong presence at trade fairs continues to be welcomed. However, producers would like to see a significant increase in press relations, presence in the

social media, holding wine seminars and cooperation with tourism. The results of the analysis show that South Tyrol has successfully continued along the consistent path of quality in recent years by massively converting its wine bottling to 75cl bottles. Now it is increasingly necessary to face new challenges in production and marketing: •

Innovative marketing approaches, such as specially produced literature and films, could further improve the marketing of the terroir and the emotions of the wine region South Tyrol.

The South Tyrolean market continues to play an important role, especially for small producers. In the South Tyrolean hospitality industry, there is still potential to communicate the high quality of South Tyrolean wines to the guests. In addition, the position on the important Italian market must be further consolidated.

Furthermore, strong international marketing activities are also necessary. Since the development of sales markets is very cost-intensive, there needs to be placed an emphasis on the selection of the countries, both in terms of core markets and new markets.

South Tyrol&#39;s wines are very diverse. In order to nevertheless enable joint marketing, a uniform identification mark, the South Tyrol capsule, was introduced in 2011. In addition, it would be important to agree on 1 or 2 leading varieties.

An important trend in the wine industry, which has also established itself in South Tyrol, is the wine from single vineyards. However, it is still necessary to convince consumers of this through joint communication.

Finally, in order to promote sustainability, a further increase in organic wine growing could be useful.