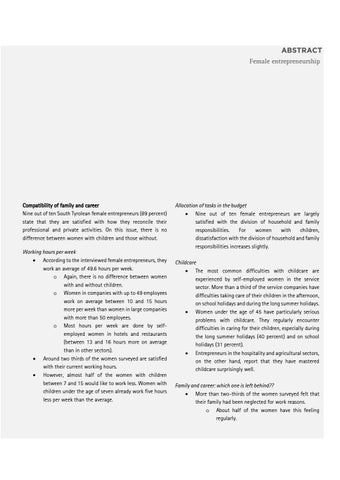 Compatibility of family and career Nine out of ten South Tyrolean female entrepreneurs (89 percent) state that they are satisfied with how they reconcile their professional and private activities. On this issue, there is no difference between women with children and those without. Working hours per week • According to the interviewed female entrepreneurs, they work an average of 49.6 hours per week. o Again, there is no difference between women with and without children. o Women in companies with up to 49 employees work on average between 10 and 15 hours more per week than women in large companies with more than 50 employees. o Most hours per week are done by selfemployed women in hotels and restaurants (between 13 and 16 hours more on average than in other sectors). • Around two thirds of the women surveyed are satisfied with their current working hours. • However, almost half of the women with children between 7 and 15 would like to work less. Women with children under the age of seven already work five hours less per week than the average.

Allocation of tasks in the budget • Nine out of ten female entrepreneurs are largely satisfied with the division of household and family responsibilities. For women with children, dissatisfaction with the division of household and family responsibilities increases slightly. Childcare • The most common difficulties with childcare are experienced by self-employed women in the service sector. More than a third of the service companies have difficulties taking care of their children in the afternoon, on school holidays and during the long summer holidays. • Women under the age of 45 have particularly serious problems with childcare. They regularly encounter difficulties in caring for their children, especially during the long summer holidays (40 percent) and on school holidays (31 percent). • Entrepreneurs in the hospitality and agricultural sectors, on the other hand, report that they have mastered childcare surprisingly well. Family and career: which one is left behind?? • More than two-thirds of the women surveyed felt that their family had been neglected for work reasons. o About half of the women have this feeling regularly.

In the hospitality sector, the sector in which women work the most hours a week, the family is most often neglected for work reasons. The women surveyed from the agricultural sector state that they least often neglect their families for work reasons. o Eight out of ten female entrepreneurs under the age of 45 state that their family has been neglected for work reasons at least once. Two thirds of self-employed women have had to neglect important work because of family responsibilities, which has led to problems in the company. However, the majority of female entrepreneurs have never had to refuse orders from customers due to family obligations. o

Women in the business world Absence from work • More than half of the women say that a longer absence due to illness would be a very big problem for their company. o In agriculture, a longer absence would be less serious than in other sectors. o The absence of female owners of sole proprietorships and shareholders in partnerships would have more serious consequences for the company than the absence of women in the highest decisionmaking bodies of corporations. Acceptance of women in the business world • The acceptance of women in contact with customers is the biggest problem. Almost half of the women say that in the past they have not been taken seriously by customers because of their gender. • Three out of ten women have had difficulties in asserting themselves as women among their own employees. Especially for female entrepreneurs under the age of 45, the assertiveness regarding their own employees is a major problem. The older the entrepreneurs are, the fewer difficulties they have in dealing with employees. • According to the survey results, women are rarely disadvantaged because of their gender in discussions with suppliers and banks.

Demands on politicians • The most frequently cited concerns of the women surveyed are the recognition of the years of unemployment due to upbringing of children for the pension, better protection in the event of prolonged occupational disability and childcare measures. o For women without children, better protection in the event of prolonged occupational disability is the most frequently cited demand to politicians. o For just almost half of the surveyed women with children, recognition of their years of upbringing is the main concern. o For women under the age of 45, childcare measures are the most important policy requirement. Attractiveness of female entrepreneurship • More than three quarters of women entrepreneurs (79 percent) would again choose the path to selfemployment. This applies to women with children same as for women without children. • The majority of the women would also recommend selfemployment to their daughters. In this case, the age of the interviewed female entrepreneurs does not play any role.