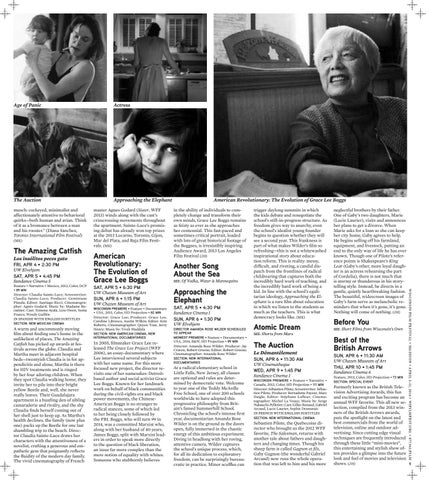 musch: cockeyed, minimalist and affectionately attentive to behavioral quirks—both human and avian. Think of it as a bromance between a man and his rooster.” (Diana Sanchez, Toronto International Film Festival) (MK)

A warm and uncommonly moving film about finding one’s home in the unlikeliest of places, The Amazing Catfish has picked up awards at festivals across the globe. Claudia and Martha meet in adjacent hospital beds—twentyish Claudia is in for appendicitis and alone, Martha is there for HIV treatments and is ringed by her four adoring children. When they spot Claudia walking home, they invite her to pile into their bright yellow Beetle and, well, she never really leaves. Their Guadalajara apartment is a bustling den of sibling camaraderie and rivalry, and the shy Claudia finds herself coming out of her shell just to keep up. As Martha’s health declines, the family (now plus one) packs up the Beetle for one last shambling trip to the beach. Director Claudia Sainte-Luce draws her characters with the attentiveness of a novelist, crafting a generous and empathetic gem that poignantly reflects the fluidity of the modern day family. The vivid cinematography of French

In 2005, filmmaker Grace Lee released The Grace Lee Project (WFF 2006), an essay-documentary where Lee interviewed several subjects with her same name. For this more focused new project, the director revisits one of her namesakes: Detroitbased author and social activist Grace Lee Boggs. Known for her landmark work on behalf of black communities during the civil-rights era and black power movements, the ChineseAmerican Boggs is no stranger to radical stances, some of which led to her being closely followed by the FBI. Boggs, who will turn 99 in 2014, was a committed Marxist who, along with her husband of 40 years, James Boggs, split with Marxist leaders in order to speak more directly to the question of black liberation, an issue far more complex than the mere notion of equality with whites. Someone who stubbornly believes

in the ability of individuals to completely change and transform their own minds, Grace Lee Boggs remains as feisty as ever as she approaches her centennial. This fast-paced and sometimes critical portrait, loaded with lots of great historical footage of the Boggses, is irresistibly inspiring. Audience Award, 2013 Los Angeles Film Festival (JH)

Another Song About the Sea

At a radical elementary school in Little Falls, New Jersey, all classes are optional and rules are determined by democratic vote. Welcome to year one of the Teddy McArdle Free School, one of over 200 schools worldwide to have adopted this progressive philosophy from Britain’s famed Summerhill School. Chronicling the school’s intense first year, documentarian Amanda Rose Wilder is on the ground as the doors open, fully immersed in the chaotic energy of this ambitious experiment. Diving in headlong with her roving, attentive camera, Wilder captures the school’s unique process, which, for all its dedication to exploratory freedom, can be surprisingly bureaucratic in practice. Minor scuffles can

trigger daylong summits in which the kids debate and renegotiate the school’s still-in-progress structure. As freedom gives way to anarchy, even the school’s idealist young founder begins to question whether they will see a second year. This frankness is part of what makes Wilder’s film so refreshing—this is not a whitewashed inspirational story about education reform. This is reality: messy, difficult, and riveting, a candid dispatch from the frontlines of radical childrearing that captures both the incredibly hard work of teaching, and the incredibly hard work of being a kid. In line with the school’s egalitarian ideology, Approaching the Elephant is a rare film about education in which we listen to the students as much as the teachers. This is what democracy looks like. (MK)

Sebastien Pilote, the Quebecoise director who brought us the 2012 WFF favorite, The Salesman, returns with another tale about fathers and daughters and changing times. Though his sheep farm is called Gagnon et fils, Gaby Gagnon (the wonderful Gabriel Arcand) now runs the whole operation that was left to him and his more

neglectful brothers by their father. One of Gaby’s two daughters, Marie (Lucie Laurier), visits and announces her plans to get a divorce. When Marie asks for a loan so she can keep her city home, Gaby agrees to help. He begins selling off his farmland, equipment, and livestock, putting an end to the only way of life he has ever known. Though one of Pilote’s reference points is Shakespeare’s King Lear (Gaby’s other, more loyal daughter is an actress rehearsing the part of Cordelia), there is not much that is stormy or thunderous in his storytelling style. Instead, he directs in a gentle, quietly heartbreaking fashion. The beautiful, widescreen images of Gaby’s farm serve as melancholic reminders that when it’s gone, it’s gone. Nothing will come of nothing. (JH)

Formerly known as the British Television Advertising Awards, this fun and exciting program has become an annual WFF favorite. This all new selection, compiled from the 2013 winners of the British Arrows awards, puts the spotlight on the latest and best commercials from the world of television, online and outdoor advertising. Since cutting edge visual techniques are frequently introduced through these little “mini-movies”, this entertaining and stylish show often provides a glimpse into the future look and feel of movies and television shows. (JH) 9