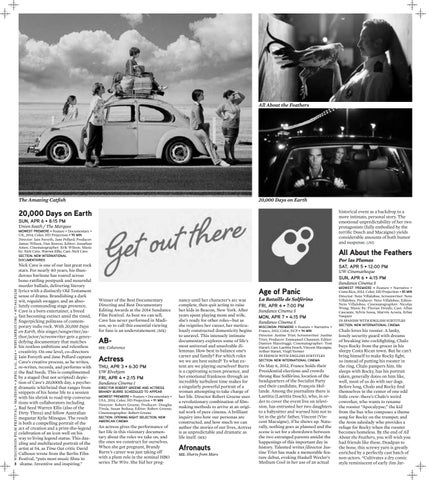 All About the Feathers

historical event as a backdrop to a more intimate, personal story. The emotional unpredictability of her two protagonists (fully embodied by the terrific Dosch and Macaigne) yields considerable amounts of both humor and suspense. (JH)

All About the Feathers

Nick Cave is one of our last great rock stars. For nearly 40 years, his thunderous baritone has roared across bone-rattling postpunk and mournful murder ballads, delivering literary lyrics with a distinctly Old Testament sense of drama. Brandishing a dark wit, roguish swagger, and an absolutely commanding stage presence, Cave is a born entertainer, a breed fast becoming extinct amid the timid, fingerpicking politesse of contemporary indie rock. With 20,000 Days on Earth, this singer/songwriter/author/actor/screenwriter gets a genredefying documentary that matches his restless ambitions and relentless creativity. On one level, co-directors Iain Forsyth and Jane Pollard capture Cave’s creative process, as he writes, re-writes, records, and performs with the Bad Seeds. This is complimented by a staged (but not scripted) depiction of Cave’s 20,000th day, a psychodramatic whirlwind that ranges from snippets of his home life to a session with his shrink to road-trip conversations with collaborators including Bad Seed Warren Ellis (also of the Dirty Three) and fellow Australian megastar Kylie Minogue. The result is both a compelling portrait of the act of creation and a print-the-legend celebration of an icon well on his way to living legend status. This dazzling and multifaceted portrait of the artist at 54, as Time Out critic David Calhoun wrote from the Berlin Film Festival, “puts most music films to 8 shame. Inventive and inspiring.”

Age of Panic Winner of the Best Documentary Directing and Best Documentary Editing Awards at the 2014 Sundance Film Festival. As best we can tell, Cave has never performed in Madison, so to call this essential viewing for fans is an understatement. (MK)

An actress gives the performance of her life in this visionary documentary about the roles we take on, and the ones we construct for ourselves. When she got pregnant, Brandy Burre’s career was just taking off with a plum role in the seminal HBO series The Wire. She hid her preg-

nancy until her character’s arc was complete, then quit acting to raise her kids in Beacon, New York. After years spent playing mom and wife, she’s ready for other roles—but as she reignites her career, her meticulously constructed domesticity begins to unravel. This intensely intimate documentary explores some of life’s most universal and unsolvable dilemmas: How best to balance one’s career and family? For which roles we we are best suited? To what extent are we playing ourselves? Burre is a captivating screen presence, and her emotional frankness through an incredibly turbulent time makes for a singularly powerful portrait of a woman attempting to take charge of her life. Director Robert Greene uses a revolutionary combination of filmmaking methods to arrive at an original work of pure cinema. A brilliant inquiry into how our personas are constructed, and how much we can author the stories of our lives, Actress is as unpredictable and dramatic as life itself. (MK)

On May 6, 2012, France holds their Presidential elections and crowds throng Rue Solférino, location of the headquarters of the Socialist Party and their candidate, François Hollande. Among the journalists there is Laetitia (Laetitia Dosch), who, in order to cover the event live on television, has entrusted her two daughters to a babysitter and warned him not to let in the girls’ father, Vincent (Vincent Macaigne), if he shows up. Naturally, nothing goes as planned and the scene is set for a showdown between the two estranged parents amidst the happenings of this important day in history. Talented writer/director Justine Triet has made a memorable feature debut, evoking Haskell Wexler’s Medium Cool in her use of an actual

Chalo loves his rooster. A lanky, lonely security guard with dreams of breaking into cockfighting, Chalo buys Rocky from the grocer in his sleepy Costa Rican town. But he can’t bring himself to make Rocky fight, so instead of putting his rooster in the ring, Chalo pampers him. He sleeps with Rocky, has his portrait taken, generally dotes on him like, well, most of us do with our dogs. Before long, Chalo and Rocky find themselves in the center of one odd little crew: there’s Chalo’s weird coworker, who wants to rename the rooster “Apocalypse;” the kid from the bus who composes a theme song for Rocky on the trumpet; and the Avon saleslady who provides a refuge for Rocky when the rooster becomes homeless. By the end of All About the Feathers, you will wish you had friends like these. Deadpan to the bone, this screwy yarn is greatly enriched by a perfectly cast batch of non-actors. “Cultivates a dry comic style reminiscent of early Jim Jar-