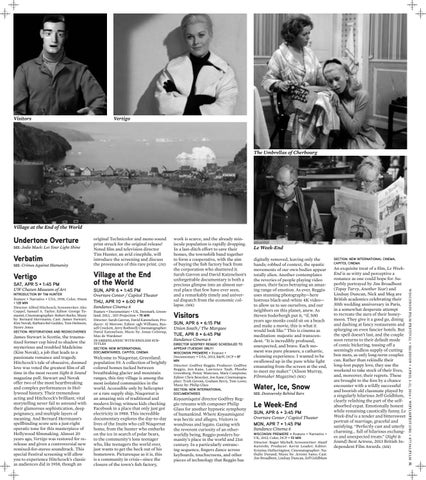 The Umbrellas of Cherbourg

Village at the End of the World

James Stewart is Scottie, the traumatized former cop hired to shadow the mysterious and troubled Madeleine (Kim Novak), a job that leads to a passionate romance and tragedy. Hitchcock’s tale of obsessive, doomed love was voted the greatest film of all time in the most recent Sight &amp; Sound magazine poll. Stewart and Novak offer two of the most heartbreaking and complex performances in Hollywood history. Their tremendous acting and Hitchcock’s brilliant, vital storytelling never fail to astound with their glamorous sophistication, deep poignancy, and multiple layers of meaning. And Bernard Herrmann’s spellbinding score sets a just-right operatic tone for this masterpiece of Hollywood filmmaking. Almost 20 years ago, Vertigo was restored for rerelease and given a controversial new remixed-for-stereo soundtrack. This special Festival screening will allow you to experience Hitchcock’s classic as audiences did in 1958, though an

Welcome to Niaqornat, Greenland: population 59. A collection of brightly colored homes tucked between breathtaking glacier and mountain ranges, this tiny village is among the most isolated communities in the world. Accessible only by helicopter or a rare supply ship, Niaqornat is an amazing mix of traditional and modern living; witness kids checking Facebook in a place that only just got electricity in 1988. This incredible documentary explores the day-to-day lives of the Inuits who call Niaqornat home, from the hunter who embarks on the ice in search of polar bears, to the community’s lone teenager who, like teenagers the world over, just wants to get the heck out of his hometown. Picturesque as it is, this is a community in crisis—since the closure of the town’s fish factory,

work is scarce, and the already miniscule population is rapidly dropping. In a last-ditch effort to save their homes, the townsfolk band together to form a cooperative, with the aim of buying the fish factory back from the corporation who shuttered it. Sarah Gavron and David Katznelson’s unforgettable documentary is both a precious glimpse into an almost surreal place that few have ever seen, and a remarkably timely and universal dispatch from the economic collapse. (MK)

Koyaanisqatsi director Godfrey Reggio reteams with composer Philip Glass for another hypnotic symphony of humankind. Where Koyaanisqatsi was hectic and allegro, Visitors is wondrous and legato. Gazing with the reverent curiosity of an otherworldly being, Reggio ponders humanity’s place in the world and 21st century. In a particularly entrancing sequence, fingers dance across keyboards, touchscreens, and other pieces of technology that Reggio has

Le Week-End digitally removed, leaving only the hands; robbed of context, the spastic movements of our own bodies appear totally alien. Another contemplates the reveries of people playing video games, their faces betraying an amazing range of emotion. As ever, Reggio uses stunning photography—here lustrous black-and-white 4K video— to allow us to see ourselves, and our neighbors on this planet, anew. As Steven Soderbergh put it, “if, 500 years ago monks could sit on a beach and make a movie, this is what it would look like.” This is cinema as meditation: majestic and transcendent. “It is incredibly profound, unexpected, and brave. Each moment was pure pleasure, a cathartic, cleansing experience. I wanted to be swallowed up in the pure white light emanating from the screen at the end, to meet my maker.” (Alison Murray, Filmmaker Magazine) (MK)

An exquisite treat of a film, Le WeekEnd is as witty and perceptive a romance as one could hope for. Superbly portrayed by Jim Broadbent (Topsy Turvy, Another Year) and Lindsay Duncan, Nick and Meg are British academics celebrating their 30th wedding anniversary in Paris, in a somewhat desperate attempt to recreate the aura of their honeymoon. They give it a good go, dining and dashing at fancy restaurants and splurging on even fancier hotels. But the spell doesn’t last, and the couple soon returns to their default mode of comic bickering, tossing off a seemingly endless supply of cutting bon mots, as only long-term couples can. Rather than rekindle their long-lost puppy love, they use the weekend to take stock of their lives, and, moreover, their regrets. These are brought to the fore by a chance encounter with a wildly successful and boorish old classmate played by a singularly hilarious Jeff Goldblum, clearly relishing the part of the selfabsorbed expat. Emotionally honest while remaining caustically funny, Le Week-End is a tender and bittersweet portrait of marriage, graceful and satisfying. “Perfectly cast and utterly charming… full of hilarious exchanges and unexpected treats.” (Sight &amp; Sound) Best Actress, 2013 British Independent Film Awards. (MK)

original Technicolor and mono sound print struck for the original release! Noted film and television director Tim Hunter, an avid cinephile, will introduce the screening and discuss the provenance of this rare print. (JH)