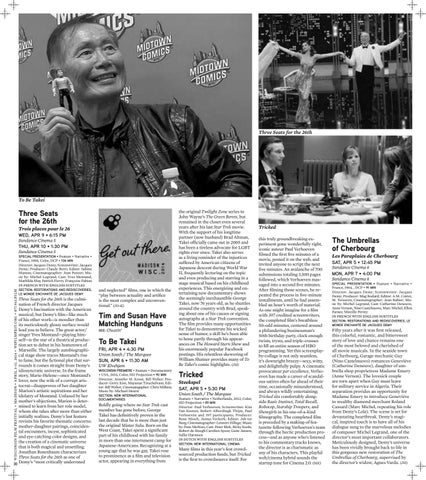 Three Seats for the 26th

Three Seats for the 26th is the culmination of French director Jacques Demy’s fascination with the American musical, but Demy’s film—like much of his other work—is moodier than its meticulously glossy surface would lead you to believe. The great actor/ singer Yves Montand—playing himself—is the star of a theatrical production set to debut in his hometown of Marseille. The largely autobiographical stage show traces Montand’s rise to fame, but the fictional plot that surrounds it comes straight from Demy’s idiosyncratic universe. In the frame story, Marie-Helene—once Montand’s lover, now the wife of a corrupt aristocrat—disapproves of her daughter Marion’s artistic aspirations and her idolatry of Montand. Unfazed by her mother’s objections, Marion is determined to learn from her role model, whom she takes after more than either initially realizes. Demy’s last feature revisits his favorite thematic concerns: mother-daughter pairings, coincidental encounters, incest, sophisticated and eye-catching color designs, and the creation of a cinematic universe that is both magical and unsettling. Jonathan Rosenbaum characterizes Three Seats for the 26th as one of 30 Demy’s “most critically underrated

and neglected” films, one in which the “play between actuality and artifice is the most complex and unconventional.” (JO-K)

Boldly going where no Star Trek cast member has gone before, George Takei has definitively proven in the last decade that he is more than just the original Mister Sulu. Born on the West Coast, Takei spent a significant part of his childhood with his family in more than one internment camp for Japanese-Americans. Recognizing at a young age that he was gay, Takei rose to prominence as a film and television actor, appearing in everything from

the original Twilight Zone series to John Wayne’s The Green Berets, but remained in the closet even several years after his last Star Trek movie. With the support of his longtime partner (now husband) Brad Altman, Takei officially came out in 2005 and has been a tireless advocate for LGBT rights ever since. Takei also serves as a living reminder of the injustices suffered by American citizens of Japanese descent during World War II, frequently lecturing on the topic and even producing and starring in a stage musical based on his childhood experiences. This energizing and entertaining new documentary shows the seemingly inexhaustible George Takei, now 76 years old, as he shuttles around the country with Brad, speaking about one of his causes or signing autographs at a Star Trek convention. The film provides many opportunities for Takei to demonstrate his wicked sense of humor, a skill he’s been able to hone partly through his appearances on The Howard Stern Show and his enormously popular Facebook postings. His relentless skewering of William Shatner provides many of To Be Takei’s comic highlights. (JH)

Many films in this year’s fest crowdsourced production funds, but Tricked is the first to crowdsource itself. For

Tricked this truly groundbreaking experiment gone wonderfully right, iconic auteur Paul Verhoeven filmed the first five minutes of a movie, posted it on the web, and invited anyone to script the next five minutes. An avalanche of 700 submissions totaling 3,500 pages followed, which Verhoeven massaged into a second five minutes. After filming those scenes, he repeated the process in five-minute installments, until he had assembled an hour’s worth of material. As one might imagine for a film with 397 credited screenwriters, the completed film’s breathless 50-odd minutes, centered around a philandering businessman’s 50th birthday party, clock enough twists, trysts, and triple-crosses to fill an entire season of HBO programming. Yet this screenplayby-collage is not only seamless, it’s downright breezy—sexy, witty, and delightfully pulpy. A cinematic provocateur par excellence, Verhoeven has made a career of scandalous satires often far ahead of their time, occasionally misunderstood, and always wildly entertaining; Tricked sits comfortably alongside Basic Instinct, Total Recall, Robocop, Starship Troopers, and Showgirls in his one-of-a-kind filmography. The completed film is preceded by a making-of featurette following Verhoeven’s team through the hectic production process—and as anyone who’s listened to his commentary tracks knows, the director is as charismatic as any of his characters. This playful web/cinema hybrid sounds the startup tone for Cinema 2.0. (MK)

Fifty years after it was first released, this colorful, romantic, and bittersweet story of love and chance remains one of the most beloved and cherished of all movie musicals. In the seaside town of Cherbourg, Garage mechanic Guy (Nino Castelnuovo) romances Geneviève (Catherine Deneuve), daughter of umbrella shop proprietress Madame Emery (Anne Vernon). The lovesick couple are torn apart when Guy must leave for military service in Algeria. Their separation provides an opportunity for Madame Emery to introduce Geneviève to wealthy diamond merchant Roland Cassard (Marc Michel, repeating his role from Demy’s Lola). The scene is set for devastating heartbreak. Demy’s magical, inspired touch is to have all of his dialogue sung to the marvelous melodies of composer Michel Legrand, one of the director’s most important collaborators. Meticulously designed, Demy’s universe has been vividly brought back to life in this gorgeous new restoration of The Umbrellas of Cherbourg, supervised by the director’s widow, Agnes Varda. (JH)