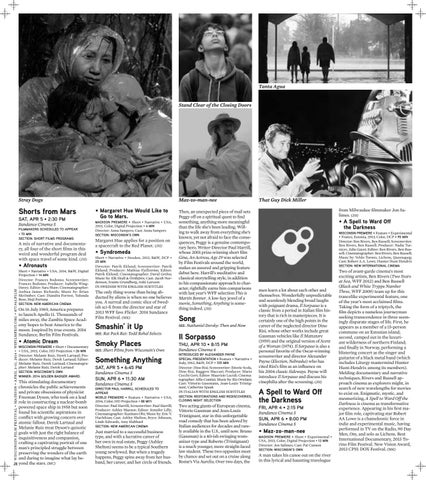 A mix of narrative and documentary, all four of the short films in this weird and wonderful program deal with space travel of some kind. (JH)

On 16 July 1969, America prepares to launch Apollo 11. Thousands of miles away, the Zambia Space Academy hopes to beat America to the moon. Inspired by true events. 2014 Sundance, Berlin Film Festivals.

Margaret Hue applies for a position on a spacecraft to the Red Planet. (JH)

The only thing worse than being abducted by aliens is when no one believes you. A surreal and comic slice of Swedish sci-fi from the director and star of 2013 WFF fave Flicker. 2014 Sundance Film Festival. (MK)

This stimulating documentary chronicles the public achievements and private obsessions of physicist Freeman Dyson, who took on a lead role in constructing a nuclear-bomb powered space ship in 1958 but soon found his scientific aspirations in conflict with growing concern over atomic fallout. Derek Lartaud and Melanie Ruiz treat Dyson’s quixotic goals with just the right balance of inquisitiveness and compassion, crafting a captivating portrait of one man’s principled struggle between preserving the wonders of the earth and daring to imagine what lay be28 yond the stars. (MC)

Just married to a successful business type, and with a lucrative career of her own in real estate, Peggy (Ashley Shelton) seems to be a typical Southern young newlywed. But when a tragedy happens, Peggy spins away from her husband, her career, and her circle of friends.

Then, an unexpected piece of mail sets Peggy off on a spiritual quest to find something, anything more meaningful than the life she’s been leading. Willing to walk away from everything she’s known, yet not afraid to face the consequences, Peggy is a genuine contemporary hero. Writer-Director Paul Harrill, whose 2001 prize-winning short film Gina, An Actress, Age 29 was selected by Film Festivals around the world, makes an assured and gripping feature debut here. Harrill’s meditative and classical storytelling style, in addition to his compassionate approach to character, rightfully earns him comparisons with last year’s WFF selection This is Martin Bonner. A low-key jewel of a movie, Something, Anything is something indeed. (JH)

Two acting giants of European cinema, Vittorio Gassman and Jean-Louis Trintignant, star in this unforgettable road comedy that has been adored by Italian audiences for decades and rarely available in the U.S., until now. Bruno (Gassman) is a 40-ish swinging womanizer type and Roberto (Trintignant) is a much younger, more straight-laced law student. These two opposites meet by chance and set out on a cruise along Rome’s Via Aurelia. Over two days, the

• A Spell to Ward Off the Darkness

men learn a lot about each other and themselves. Wonderfully unpredictable and seamlessly blending broad laughs with poignant drama, Il Sorpasso is a classic from a period in Italian film history that is rich in masterpieces. It is certainly one of the high points in the career of the neglected director Dino Risi, whose other works include great Gassman vehicles like Il Mattatore (1959) and the original version of Scent of a Woman (1974). Il Sorpasso is also a personal favorite of the Oscar-winning screenwriter and director Alexander Payne (Election, Nebraska) who has cited Risi’s film as an influence on his 2004 classic Sideways. Payne will introduce Il Sorpasso and discuss his cinephilia after the screening. (JH)

Two of avant-garde cinema’s most exciting artists, Ben Rivers (Two Years at Sea, WFF 2012) and Ben Russell (Black and White Trypps Number Three, WFF 2009) team up for this trancelike experimental feature, one of the year’s most acclaimed films. Taking the form of a triptych, the film depicts a nameless journeyman seeking transcendence in three seemingly disparate stages of life. First, he appears as a member of a 15-person commune on an Estonian island; second, camped out in the luxuriant wilderness of northern Finland; and finally in Norway, performing a blistering concert as the singer and guitarist of a black metal band (which includes Liturgy mastermind Hunter Hunt-Hendrix among its members). Melding documentary and narrative techniques, Rivers and Russell approach cinema as explorers might, in search of new wavelengths for movies to exist on. Enigmatic, mystic, and mesmerizing, A Spell to Ward Off the Darkness is cinema as transformative experience. Appearing in his first major film role, captivating star Robert AA Lowe is a chameleonic force in indie and experimental music, having performed in TV on the Radio, 90 Day Men, Om, and solo as Lichens. Best International Documentary, 2013 Torino Film Festival. New Vision Award, 2013 CPH: DOX Festival. (MK)