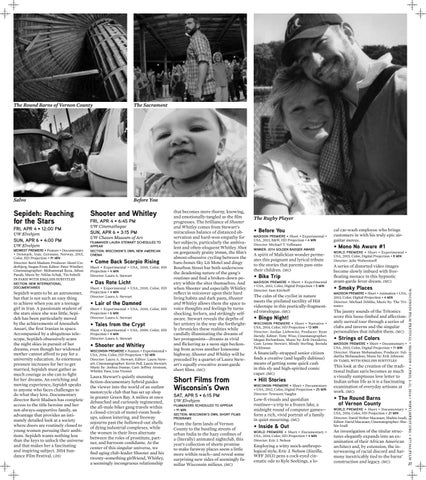 The Round Barns of Vernon County

Sepideh wants to be an astronomer, but that is not such an easy thing to achieve when you are a teenage girl in Iran. A passionate student of the stars since she was little, Sepideh has been particularly moved by the achievements of Anousheh Ansari, the first Iranian in space. Accompanied by a ubiquitous telescope, Sepideh obsessively scans the night skies in pursuit of her dreams, even though her widowed mother cannot afford to pay for a university education. As enormous pressure increases for her to get married, Sepideh must gather as much courage as she can to fight for her dreams. An enriching and moving experience, Sepideh speaks to anyone who faces challenges to do what they love. Documentary director Berit Madsen has complete access to the title heroine and her not-always-supportive family, an advantage that provides an intimately detailed look at a society where doors are routinely closed to young women pursuing their ambitions. Sepideh wants nothing less than the keys to unlock the universe and that makes her a fascinating and inspiring subject. 2014 Sundance Film Festival. (JH)

Laura Stewart’s quietly stunning fiction-documentary hybrid guides the viewer into the world of an outlaw motorcycle club that has set up shop in greater Green Bay. A milieu at once debauched and curiously regimented, the all-male biker gang travels within a closed-circuit of motel-room hookups, saloon loitering, and freeway sojourns past the hollowed-out shells of dying industrial complexes, while the women in their lives alternate between the roles of prostitute, partner, and barroom confidante. At the center of this singular universe, we find aging club-leader Shooter and his twenty-something girlfriend, Whitley, a seemingly incongruous relationship

that becomes more thorny, knowing, and emotionally-tangled as the film progresses. The brilliance of Shooter and Whitley comes from Stewart’s miraculous balance of distanced observation and hard-won empathy for her subjects, particularly the ambivalent and often-eloquent Whitley. Shot on gorgeously grainy 16mm, the film’s almost-obsessive cycling between the bare-bones Sky Lit Motel and dingy Bourbon Street bar both underscore the deadening nature of the gang’s routines and find a broken-down poetry within the sites themselves. And when Shooter and especially Whitley reflect in voiceover upon their hard living habits and dark pasts, Shooter and Whitley allows them the space to voice thoughts and feelings by turns shocking, forlorn, and strikingly selfaware. Stewart reveals the depths of her artistry in the way she forthrightly chronicles these realities while candidly illuminating the dreams of her protagonists—dreams as vivid and flickering as a neon sign beckoning from across another lonesome highway. Shooter and Whitley will be preceded by a quartet of Laura Stewart’s equally evocative avant-garde short films. (MC)

From the farm lands of Vernon County to the bustling streets of urban India to the hazy confines of a (literally) animated nightclub, this year’s collection of shorts promise to make faraway places seem a little more within reach—and reveal some surprising new sides of seemingly familiar Wisconsin milieus. (MC)

A spirit of Malickian wonder permeates this poignant and lyrical tribute to the stories that parents pass onto their children. (MC)

The calm of the cyclist in nature meets the pixilated tactility of Hi8 videotape in this poetically-fragmented travelogue. (MC)

A financially-strapped senior citizen finds a creative (and legally dubious) means of getting some quick cash in this sly and high-spirited comic caper. (MC)

Low-fi visuals and quotidian routines—a trip to a frozen lake, a midnight round of computer games— form a rich, vivid portrait of a family in quiet mourning. (MC)

cal car-wash employee who brings customers in with his truly epic airguitar moves.

The jaunty sounds of the Tritonics score this loose-limbed and affectionately surreal tour through a series of clubs and taverns and the singular personalities that inhabit them. (MC)

This look at the creation of the traditional Indian saris becomes as much a visually sumptuous love letter to Indian urban life as it is a fascinating examination of everyday artisans at work. (MC)

• The Round Barns of Vernon County

An investigation of the titular structures elegantly expands into an examination of their African American architect and, by extension, the interweaving of racial discord and harmony inextricably tied to the barns’ construction and legacy. (MC) 27