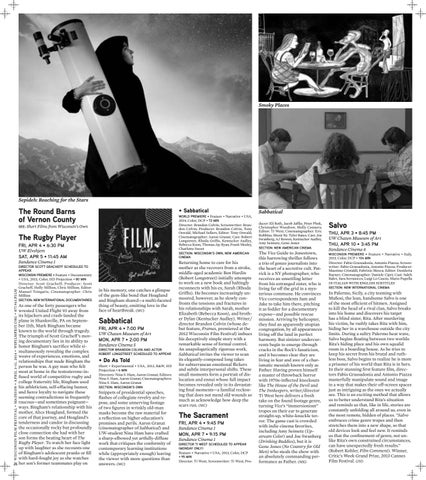 Sepideh: Reaching for the Stars

The Round Barns of Vernon County

As one of the forty passengers who wrested United Flight 93 away from its hijackers and crash-landed the plane in Shanksville, PA on September 11th, Mark Bingham became known to the world through tragedy. The triumph of Scott Gracheff’s moving documentary lies in its ability to honor Bingham’s sacrifice while simultaneously revealing the complex weave of experiences, emotions, and relationships that made Bingham the person he was. A gay man who felt most at home in the testosterone-infused world of competitive rugby and college fraternity life, Bingham used his athleticism, self-effacing humor, and fierce loyalty to navigate these seeming contradictions in frequently raucous—and sometimes poignant— ways. Bingham’s relationship with his mother, Alice Hoagland, formed the core of that journey, and Hoagland’s tenderness and candor in discussing the occasionally rocky but profoundly close connection she had with her son forms the beating heart of The Rugby Player. To watch her face light up with laughter as she recounts one of Bingham’s adolescent pranks or fill with hard-fought joy as she watches 26 her son’s former teammates play on

in his memory, one catches a glimpse of the gem-like bond that Hoagland and Bingham shared—a multi-faceted thing of beauty, emitting love in the face of heartbreak. (MC)

Snippets of presidential speeches, flashes of collegiate revelry and repose, and some unnerving footage of two figures in wrinkly old-man masks become the raw material for a reflection on higher education’s promises and perils. Aaron Granat (cinematographer of Sabbatical) and UW-student Nina Ham have crafted a sharp-elbowed yet artfully-diffuse work that critiques the conformity of contemporary learning institutions while (appropriately enough) leaving the viewer with more questions than answers. (MC)

Returning home to care for his mother as she recovers from a stroke, middle-aged academic Ben Hardin (Robert Longstreet) initially attempts to work on a new book and haltingly reconnects with his ex, Sarah (Rhoda Griffis). He becomes increasingly unmoored, however, as he slowly confronts the tensions and fractures in his relationships with Sarah, mother Elizabeth (Rebecca Koon), and brother Dylan (Kentucker Audley). Writer/ director Brandon Colvin (whose debut feature, Frames, premiered at the 2012 Wisconsin Film Festival) imbues his deceptively simple story with a remarkable sense of formal control. An unapologetically rigorous work, Sabbatical invites the viewer to scan its elegantly-composed long takes for subterranean emotional flickers and subtle interpersonal shifts. These small moments form a portrait of dislocation and ennui whose full impact becomes revealed only in its devastating final moments—a familial reckoning that does not mend old wounds so much as acknowledge how deep the scars run. (MC)

The Vice Guide to Jonestown, this harrowing thriller follows a trio of gonzo journalists into the heart of a secretive cult. Patrick is a NY photographer, who receives an unsettling letter from his estranged sister, who is living far off the grid in a mysterious commune. He convinces Vice correspondents Sam and Jake to take him there, pitching it as fodder for a documentary expose—and possible rescue mission. Arriving by helicopter, they find an apparently utopian congregation, by all appearances living off the land in perfect harmony. But sinister undercurrents begin to emerge through cracks in the flock’s fanaticism, and it becomes clear they are living in fear and awe of a charismatic messiah known only as Father. Having proven himself a master of throwback horror with 1970s-inflected knockouts like The House of the Devil and The Innkeepers, writer/director Ti West here delivers a fresh take on the found footage genre, turning Vice’s “immersionism” tropes on their ear to generate straight-up, white-knuckle terror. The game cast is crowded with indie cinema favorites, including Amy Seimetz (Upstream Color) and Joe Swanberg (Drinking Buddies), but it is Gene Jones (No Country for Old Men) who steals the show with an absolutely commanding performance as Father. (MK)

In Palermo, Sicily, a city teeming with Mafiosi, the lean, handsome Salvo is one of the most efficient of hitmen. Assigned to kill the head of a rival clan, Salvo breaks into his home and discovers his target has a blind sister, Rita. After murdering his victim, he rashly takes Rita with him, hiding her in a warehouse outside the city limits. During a sultry Palermo heat wave, Salvo begins floating between two worlds: Rita’s hiding place and his own squalid room in a boarding house. As he tries to keep his secret from his brutal and ruthless boss, Salvo begins to realize he is more a prisoner of his world than Rita is in hers. In their stunning first feature film, directors Fabio Grassadonia and Antonio Piazza masterfully manipulate sound and image in a way that makes their off-screen spaces just as intriguing as the ones we actually see. This is an exciting method that allows us to better understand Rita’s situation and reminds us that, like in life, stories are constantly unfolding all around us, even in the most remote, hidden of places. “Salvo embraces crime genre tropes and then stretches them into a new shape, so that old devices look and feel new. It reminds us that the confinement of genre, not unlike Rita’s own constrained circumstances, can have unexpectedly fresh results.” (Robert Kohler, Film Comment). Winner, Critic’s Week Grand Prize, 2013 Cannes Film Festival. (JH)