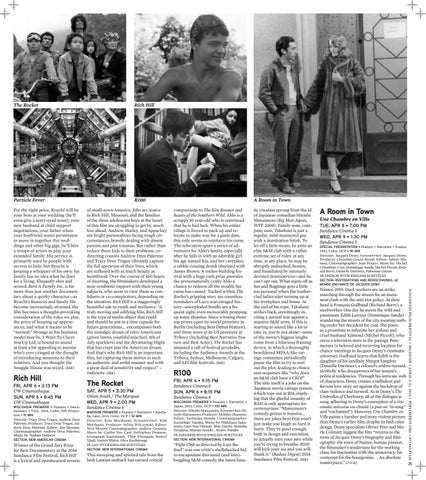 R100 of small-town America. Jobs are scarce in Rich Hill, Missouri, and the families of the three adolescent boys at the heart of this film are struggling to get by, much less ahead. Andrew, Harley, and Appachey are bright personalities facing tough circumstances, bravely dealing with absent parents and past traumas. But rather than reduce these kids to their problems, codirecting cousins Andrew Droz Palermo and Tracy Droz Tragos vibrantly capture the full spectrum of their lives, which are suffused with as much beauty as heartbreak. Over the course of 450 hours of shooting, the filmmakers developed a near-symbiotic rapport with their young subjects, who seem to view them as confidants or co-conspirators, depending on the situation. Rich Hill is a staggeringly beautiful ode to youth and resilience. “A truly moving and edifying film, Rich Hill is the type of media object that could and should be put in a time capsule for future generations…. encompasses both the nostalgic dream of retro Americana (green lawns, youthful mischief, 4th of July sparklers) and the devastating blight that has crept into the American dream. And that’s why Rich Hill is an important film, for capturing these stories in such an authentic and artful manner and with a great deal of sensitivity and respect” – Indiewire. (MK)

comparisons to The Kite Runner and Beasts of the Southern Wild. Ahlo is a scrappy 10 year-old who is convinced that he is bad luck. When his entire village is forced to pack up and relocate to make way for a giant dam, this only seems to reinforce his curse. The relocation spurs a series of adventures for Ahlo’s family, especially after he falls in with an adorable girl his age named Kia, and her caretaker, a rabble-rousing drunk obsessed with James Brown. A rocket-building festival with a huge cash prize provides the preternaturally crafty Ahlo a chance to redeem all the trouble his curse has caused. Tucked within The Rocket’s gripping story are countless reminders of Lao’s war-ravaged history—unexploded bombs are a frequent sight, even memorably propping up some shanties. Since winning three top prizes upon its world premiere in Berlin (including Best Debut Feature), and three more at its US premiere at Tribeca (including Best Narrative Feature and Best Actor), The Rocket has amassed a raft of festival accolades, including the Audience Awards at the Tribeca, Sydney, Melbourne, Calgary, and AFI film festivals. (MK)

Winner of the Grand Jury Prize for Best Documentary at the 2014 Sundance Film Festival, Rich Hill is a lyrical and openhearted reverie

“Fight Club as directed by Luis Buñuel” was one critic’s shellshocked bid to encapsulate this mind (and loin)boggling S&amp;M comedy, the latest luna-

tic creation sprung from the id of Japanese comedian Hitoshi Matusmoto (Big Man Japan, WFF 2008). Family man, company man, Takafumi is just a regular, mild-mannered guy with a domination fetish. To let off a little steam, he joins an elite S&amp;M club with a rather extreme set of rules: at any time, at any place, he may be abruptly ambushed, beaten, and humiliated by intensely devoted dominatrices—and he can’t opt out. What starts off as fun and floggings gets a little too personal when the leatherclad ladies start turning up at his workplace and home. At the end of his rope, Takafumi strikes back, unwittingly inciting a surreal war against a massive S&amp;M army. If this is starting to sound like a lot to take in, you’re not alone—some of the movie’s biggest laughs come from a hilarious framing device, in which a thoroughly bewildered MPAA-like ratings committee periodically pause the film to try to sort out the plot, leading to choice non-sequiturs like “why does an S&amp;M club have a CEO?” The title itself is a joke on the Japanese movie ratings system, which tops out at R18, implying that the gleeful insanity of R100 is only appropriate for centenarians. “Matsumoto’s comedy genius is massive… there are jokes here that won’t just make you laugh so hard it hurts. They’re good enough, both in design and execution, to actually earn your awe while you’re trying to breathe. R100 will kick your ass and you will thank it.” (Badass Digest) 2014 Sundance Film Festival. (MK)

Nantes, 1955: Dock workers are on strike, marching through the streets for an imminent clash with the anti-riot police. At their head is François Guilbaud (Richard Berry), a steelworker. One day he meets the wild and passionate Edith Leroyer (Dominique Sanda) wandering the streets of the city wearing nothing under her decadent fur coat. She poses as a prostitute to infuriate her jealous and cruel husband Edmond (Michel Piccoli), who owns a television store in the passage Pommeraye (a beloved and recurring location for chance meetings in Jacques Demy’s cinematic universe). Guilbaud learns that Edith is the daughter of his landlady Margot Langlois (Danielle Darrieux), a colonel’s widow-turnedalcoholic who disapproves of her tenant’s political tendencies. Through his intricate web of characters, Demy creates a turbulent and fervent love story set against the backdrop of class violence and turmoil. As in Demy’s The Umbrellas of Cherbourg, all of the dialogue is sung, adhering to Demy’s conception of a cinematic universe en-chanté (a pun on “in song” and “enchanted”). However, Une Chambre en Ville paints a harsher and more violent picture than Demy’s earlier film, despite its lush color design. Demy specialists Olivier Père and Marie Colmant suggest the film “returns to the roots of Jacques Demy’s biography and filmography: the town of Nantes, human passion, the filmmaker’s tenderness for the working class, his fascination with the aristocracy, his contempt for the bourgeoisie. . . An absolute masterpiece.” (J O-K) 25

For the right price, Ryuchi will be your boss at your wedding (he’ll even give a teary-eyed toast), your new husband at child support negotiations, your father when your boyfriend wants permission to move in together. For weddings and other big gigs, he’ll hire a troupe of actors to play your extended family. His service is primarily used by people with secrets to hide, but Ryuchi is keeping a whopper of his own: his family has no idea what he does for a living. Elegantly shot and scored, Rent A Family Inc. is far more than just another documentary about a quirky character—as Ryuchi’s finances and family life become increasingly strained, the film becomes a thought-provoking consideration of the roles we play, the price of keeping up appearances, and what it means to be “normal.” Strange as his business model may be, I Want To Cheer You Up Ltd, is bound to sound at least a bit appealing to anyone who’s ever cringed at the thought of introducing someone to their relatives. And you thought the Snuggle House was weird. (MK)

A Room in Town