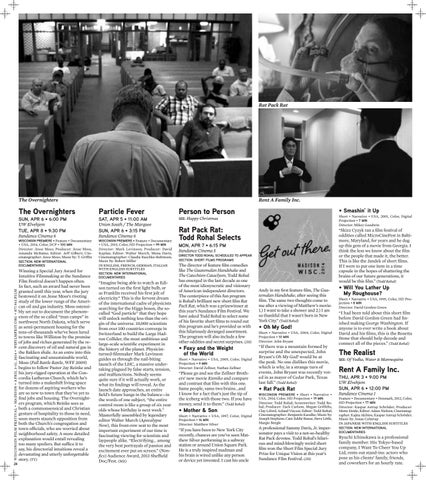 Winning a Special Jury Award for Intuitive Filmmaking at the Sundance Film Festival doesn’t happen often. In fact, such an award had never been granted until this year, when the jury bestowed it on Jesse Moss’s riveting study of the lower rungs of the American oil and gas industry. Moss ostensibly set out to document the phenomenon of the so called “man camps” in northwest North Dakota, which serve as semi-permanent housing for the tens-of-thousands who’ve been lured to towns like Williston by the promise of jobs and riches generated by the recent discovery of oil and natural gas in the Bakken shale. As an entre into this fascinating and unsustainable world, Moss (Full Battle Rattle, WFF 2009) begins to follow Pastor Jay Reinke and his jury-rigged operation at the Concordia Lutheran Church, which he’s turned into a makeshift living space for dozens of aspiring workers who are so new to town that they’ve yet to find jobs and housing. The Overnighters program, which Reinke sees as both a commonsensical and Christian gesture of hospitality to those in need, soon meets staunch opposition from both the Church’s congregation and town officials, who are worried about neighborhood safety. A more detailed explanation would entail revealing too many spoilers. But suffice it to say, his directorial intuitions reveal a devastating and utterly unforgettable story. (TY)

“Imagine being able to watch as Edison turned on the first light bulb, or as Franklin received his first jolt of electricity.” This is the fervent dream of the international cadre of physicists searching for the Higgs boson, the socalled “God particle” that they hope will unlock nothing less than the origin of the universe. 10,000 scientists from over 100 countries converge in Switzerland to build the Large Hadron Collider, the most ambitious and large-scale scientific experiment in the history of the planet. Physicistturned-filmmaker Mark Levinson guides us through the nail-biting launch of the LHC, a massive undertaking plagued by false starts, tension, and malfunctions. Nobody seems quite sure if it will actually work, or what its findings will reveal. As the launch date approaches, an entire field’s future hangs in the balance—in the words of one subject, “the entire control room is like a group of six year olds whose birthday is next week.” Masterfully assembled by legendary editor Walter Murch (Apocalypse Now), this front-row seat to the most important experiment of our time is fascinating viewing for scientists and laypeople alike. “Electrifying… among the very best portrayals of passion and excitement ever put on screen.” (Nonfics) Audience Award, 2013 Sheffield Doc/Fest. (MK)

“Skizz Cyzyk ran a film festival of oddities called MicroCineFest in Baltimore, Maryland, for years and he dug up this gem of a movie from Georgia. I think the less we know about the film or the people that made it, the better. This is like the Jandek of short films. If I were to put one item in a time capsule in the hopes of shattering the brains of our future generations, it would be this film.” (Todd Rohal)

The director of feature film comedies like The Guatemalan Handshake and The Catechism Cataclysm, Todd Rohal has emerged in the last decade as one of the most idiosyncratic and visionary of American independent directors. The centerpiece of this fun program is Rohal’s brilliant new short film Rat Pack Rat, which was a prizewinner at this year’s Sundance Film Festival. We have asked Todd Rohal to select some of his favorite short films to round out this program and he’s provided us with this hilariously deranged assortment. The program will also include a few other oddities and secret surprises. (JH)

• Foxy and the Weight of the World

“Please go and see the Zellner Brothers’ new movie Kumiko and compare and contrast that film with this one. Same people, same two brains…and I know for a fact that’s just the tip of the iceberg with those two. If you have money, send it to them.” (Todd Rohal)

“If you have been to New York City recently, chances are you’ve seen Matthew Silver performing in a subway station or around Union Square Park. He is a truly inspired madman and his brain is wired unlike any person or device yet invented. I cast his uncle

Andy in my first feature film, The Guatemalan Handshake, after seeing this film. The same two thoughts come to me after a viewing of Matthew’s movie: 1.) I want to take a shower and 2.) I am so thankful that I wasn’t born in New York City.” (Todd Rohal)

“If there was a mountain formed by surprise and the unexpected, John Bryant’s Oh My God! would be at the peak. No one dislikes this movie, which is why, in a strange turn of events, John Bryant was recently voted in as mayor of Cedar Park, Texas last fall.” (Todd Rohal)

• Will You Lather Up My Roughouse?

“I had been told about this short film before David Gordon Green had finished making George Washington. If anyone is to ever write a book about David and his films, this is the Rosetta Stone that should help decode and connect all of the pieces.” (Todd Rohal)

Ryuchi Ichinokawa is a professional family member. His Tokyo-based company, I Want To Cheer You Up Ltd, rents out stand-ins: actors who pose as his clients’ family, friends, and coworkers for an hourly rate.