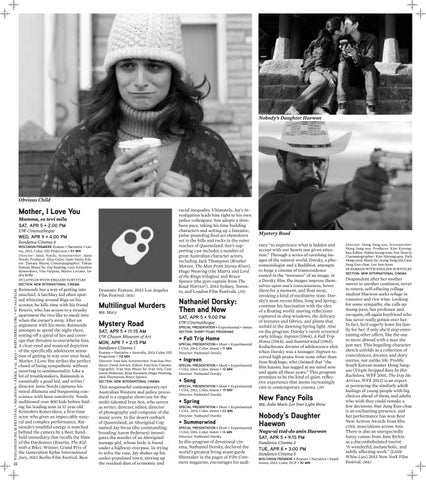 Raimonds has a way of getting into mischief. A latchkey kid often spotted whizzing around Riga on his scooter, he kills time with his friend Peteris, who has access to a swanky apartment the two like to sneak into when the owner’s away. After an argument with his mom, Raimonds attempts to spend the night there, setting off a spiral of lies and coverups that threaten to overwhelm him. A clear-eyed and nuanced depiction of the specifically adolescent sensation of getting in way over your head, Mother, I Love You strikes the perfect chord of being sympathetic without resorting to sentimentality. Like a lot of troublemakers, Raimonds is essentially a good kid, and writer/ director Janis Nords captures his moral dilemma and burgeoning conscience with keen sensitivity. Nords auditioned over 800 kids before finding his leading man in 13 year-old Kristofers Konovalovs, a first-time actor who gives an impeccably natural and complex performance. Raimonds’s youthful energy is matched behind the camera by a fleet, handheld immediacy that recalls the films of the Dardennes (Rosetta, The Kid with a Bike). Winner, Grand Prix of the Generation Kplus International Jury, 2013 Berlin Film Festival. Best

This suspenseful contemporary-set Australian Western and police procedural is a singular showcase for the multi-talented Ivan Sen, who serves as writer, director, editor, director of photography and composer of the music score. In the desert outback of Queensland, an Aboriginal Cop named Jay Swan (the commanding, brooding Aaron Pedersen) investigates the murder of an Aboriginal teenage girl, whose body is found under a highway overpass. In trying to solve the case, Jay shakes up his under-populated town, stirring up the residual dust of economic and

racial inequality. Ultimately, Jay’s investigation leads him right to his own police colleagues. Sen adopts a slowburn pace, taking his time building characters and setting up a fantastic, pulse-pounding final act showdown set in the hills and rocks in the outer reaches of Queensland. Sen’s supporting cast includes a number of great Australian character actors, including Jack Thompson (Breaker Morant, The Man From Snowy River), Hugo Weaving (the Matrix and Lord of the Rings trilogies) and Bruce Spence (the gyro captain from The Road Warrior!). 2013 Sydney, Toronto, and London Film Festivals. (JH)

In this program of devotional cinema, Nathaniel Dorsky, declared the world’s greatest living avant-garde filmmaker in the pages of Film Comment magazine, encourages his audi-

Mystery Road ence “to experience what is hidden and accept with our hearts our given situation.” Through a series of ravishing images of the natural world, Dorsky, a phenomenologist and a Buddhist, attempts to forge a cinema of transcendence rooted in the “nowness” of an image; in a Dorsky film, the images impress themselves upon one’s consciousness, hover there for a moment, and float away, invoking a kind of meditative state. Dorsky’s most recent films, Song and Spring, continue his fascination with the idea of a floating world: moving reflections captured in shop windows, the delicacy of textures and fabrics, and plants that unfold in the dawning Spring light. Also on the program: Dorsky’s rarely screened early trilogy, Ingreen (1964), A Fall Trip Home (1964), and Summerwind (1965), Kodachrome dreams of adolescence shot when Dorsky was a teenager. Ingreen received high praise from none other than Stan Brakhage, who claimed that “the film haunts, has tugged at my mind now and again all these years.” This program promises to be the kind of quiet, reflective experience that seems increasingly rare in contemporary cinema. (JP)

Despondent after her mother moves to another continent, never to return, self-effacing college student Haewon seeks refuge in romance and rice wine. Looking for some sympathy, she calls up Seong-joon, her professor and on-again, off-again boyfriend who has never really gotten over her. In fact, he’d eagerly leave his family for her, if only she’d stop entertaining other offers, like the one to move abroad with a man she just met. This beguiling character sketch unfolds as a collection of coincidences, dreams, and diary entries, not unlike life. Prolific South Korean master Hong Sangsoo (Virgin Stripped Bare by Her Bachelors, WFF 2001, The Day He Arrives, WFF 2012) is an expert at portraying the similarly adrift feelings of young people with big choices ahead of them, and adults who wish they could remake a few decisions. Star Jung Eun-chae is an enchanting presence, and her performance has won Best New Actress Awards from film critic associations across Asia. There is also an unexpectedly funny cameo from Jane Birkin as a discombobulated tourist. “A wonderful, melancholic, and subtly affecting work.” (Little White Lies) 2013 New York Film Festival. (MK)