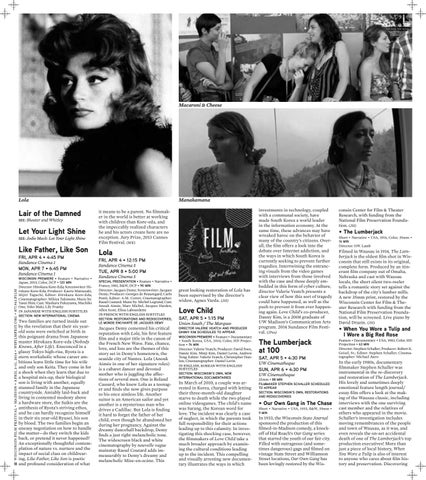 Lair of the Damned SEE: Shooter and Whitley

Two families are turned inside out by the revelation that their six yearold sons were switched at birth in this poignant drama from Japanese master Hirokazu Kore-eda (Nobody Knows, After Life). Ensconced in a glassy Tokyo high-rise, Ryota is a stern workaholic whose career ambitions leave little time for his wife and only son Keita. They come in for a shock when they learn that due to a hospital mix-up, their biological son is living with another, equally stunned family in the Japanese countryside. Amiably laid-back and living in contented modesty above a hardware store, the Saikis are the antithesis of Ryota’s striving ethos, and he can hardly recognize himself in their six year-old Ryusei, his son by blood. The two families begin an uneasy negotiation on how to handle the matter—do they switch the kids back, or pretend it never happened? An exceptionally thoughtful contemplation of nature vs. nurture and the impact of social class on childrearing, Like Father, Like Son is poetic 18 and profound consideration of what

Manakamana it means to be a parent. No filmmaker in the world is better at working with children than Kore-eda, and the impeccably realized characters he and his actors create here are no exception. Jury Prize, 2013 Cannes Film Festival. (MK)

Jacques Demy cemented his critical reputation with Lola, his first feature film and a major title in the canon of the French New Wave. Fate, chance, love, and loss are the themes of this story set in Demy’s hometown, the seaside city of Nantes. Lola (Anouk Aimée in one of her signature roles) is a cabaret dancer and devoted mother who is juggling the affections of several men. One is Roland Cassard, who knew Lola as a teenager and finds she now gives purpose to his once aimless life. Another suitor is an American sailor and yet another is a mysterious man who drives a Cadillac. But Lola is finding it hard to forget the father of her child, even though he abandoned her during her pregnancy. Against the dreamy dancehall backdrop, Demy finds a just right melancholic tone. The widescreen black and white cinematography by nouvelle vague mainstay Raoul Coutard adds immeasurably to Demy’s dreamy and melancholic Mise-en-scène. This

great looking restoration of Lola has been supervised by the director’s widow, Agnes Varda. (JH)

In March of 2010, a couple was arrested in Korea, charged with letting their three-month-old daughter starve to death while the two played online videogames. The child’s name was Sarang, the Korean word for love. The incident was clearly a case of neglect, in which the parents took full responsibility for their actions leading up to this calamity. In investigating this shocking case, however, the filmmakers of Love Child take a much broader approach by examining the cultural conditions leading up to the incident. This compelling and visually arresting new documentary illustrates the ways in which

investments in technology, coupled with a communal society, have made South Korea a world leader in the information economy. At the same time, these advances may have wreaked havoc on the behavior of many of the country’s citizens. Overall, the film offers a look into the debate over Internet addiction, and the ways in which South Korea is currently seeking to prevent further tragedies. Intertwining the entrancing visuals from the video games with interviews from those involved with the case and those deeply embedded in this form of cyber culture, director Valerie Veatch presents a clear view of how this sort of tragedy could have happened, as well as the push to prevent it from ever happening again. Love Child’s co-producer, Danny Kim, is a 2008 graduate of UW Madison’s Communication Arts program. 2014 Sundance Film Festival. (JPos)

In 1933, the Wisconsin State Journal sponsored the production of this filmed-in-Madison comedy, a knockoff of Hal Roach’s Our Gang series that starred the youth of our fair city. Filled with outrageous (and sometimes dangerous) gags and filmed on vintage State Street and Williamson Street locations, Our Own Gang has been lovingly restored by the Wis-

Filmed in Wausau in 1914, The Lumberjack is the oldest film shot in Wisconsin that still exists in its original, complete form. Produced by an itinerant film company out of Omaha, Nebraska and cast with Wausau locals, the short silent two-reeler tells a romantic story set against the backdrop of the city’s lumber mills. A new 35mm print, restored by the Wisconsin Center for Film &amp; Theater Research with funding from the National Film Preservation Foundation, will be screened. Live piano by David Drazin. (JH)

In the early 1980s, documentary filmmaker Stephen Schaller was instrumental in the re-discovery and restoration of The Lumberjack. His lovely and sometimes deeply emotional feature length journal/ essay film offers a look at the making of the Wausau classic, including interviews with the one surviving cast member and the relatives of others who appeared in the movie. Schaller’s investigation includes moving remembrances of the people and town of Wausau, as it was, and even reveals the on-set accidental death of one of The Lumberjack’s top production executives! More than just a piece of local history, When You Wore a Tulip is also of interest to anyone who cares about film history and preservation. Discovering