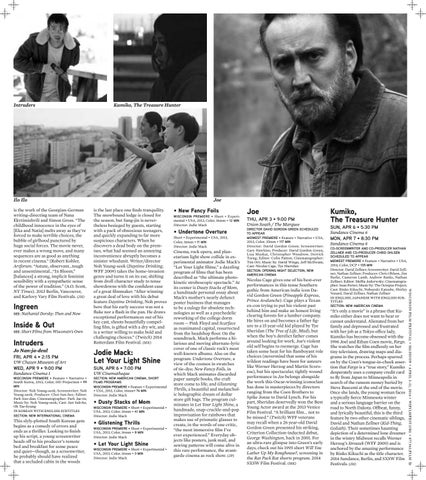 is the last place one finds tranquility. The snowbound lodge is closed for the season, but Sang-jin is nevertheless besieged by guests, starting with a pack of obnoxious teenagers, and quickly expanding to far more suspicious characters. When he discovers a dead body on the premises, what had seemed an annoying inconvenience abruptly becomes a sinister whodunit. Writer/director Noh Young-seok (Daytime Drinking, WFF 2009) takes the home-invasion genre and turns it on its ear, shifting from droll character study to tense showdowns with the confident ease of a great filmmaker. “After winning a great deal of love with his debut feature Daytime Drinking, Noh proves here that his early success was not a fluke nor a flash in the pan. He draws exceptional performances out of his key cast, shoots beautifully compelling film, is gifted with a dry wit, and is a writer willing to make bold and challenging choices.” (Twitch) 2014 Rotterdam Film Festival. (MK)

This slyly-plotted South Korean gem begins as a comedy of errors and ends as a thriller. Looking to finish up his script, a young screenwriter heads off to his producer’s remote bed and breakfast for some peace and quiet—though, as a screenwriter, he probably should have realized that a secluded cabin in the woods

Cinema, rock opera, and planetarium light show collide in experimental animator Jodie Mack’s “Let Your Light Shine,” a dazzling program of films that has been described as “the ultimate photokinetic stroboscopic spectacle.” At its center is Dusty Stacks of Mom, a handmade personal essay about Mack’s mother’s nearly defunct poster business that manages to be a eulogy for obsolete technologies as well as a psychedelic reworking of the college dorm room -- Pink Floyd and Scarface as reanimated capital, resurrected from the headshop floor. On the soundtrack, Mack performs a hilarious and moving alternate-lyric cover of one of classic rock’s most well-known albums. Also on the program: Undertone Overture, a view of the cosmos in swatches of tie-dye; New Fancy Foils, in which Mack animates discarded paper sample books, the craft store come to life; and Glistening Thrills, a beautiful and melancholic holographic dream of dollar store gift bags. The program culminates in Let Your Light Shine, a handmade, snap-crackle-and-pop improvisation for rainbows that makes use of prismatic glasses to create, in the words of one critic, “the most immersive film I’ve ever experienced.” Everyday objects like posters, junk mail, and sewing patterns will come alive in this rare performance, the avantgarde cinema as rock show. (JP)

Nicolas Cage gives one of his best-ever performances in this tense Southern gothic from American indie icon David Gordon Green (Pineapple Express, Prince Avalanche). Cage plays a Texan ex-con trying to put his violent past behind him and make an honest living clearing forests for a lumber company. He hires on and becomes a father figure to a 15 year-old kid played by Tye Sheridan (The Tree of Life, Mud), but when the boy’s derelict father comes around looking for work, Joe’s violent old self begins to reemerge. Cage has taken some heat for his flamboyant role choices (nevermind that some of his wildest readings have been for auteurs like Werner Herzog and Martin Scorsese), but his spectacular, tightly wound performance in Joe belongs alongside the work this Oscar-winning iconoclast has done in masterpieces by directors ranging from the Coen Brothers to Spike Jonze to David Lynch. For his part, Sheridan deservedly won the Best Young Actor award at the 2013 Venice Film Festival. “A brilliant film… not to be missed.” (Twitch) WFF veterans may recall when a 26 year-old David Gordon Green presented his striking, Criterion Collection-inducted debut, George Washington, back in 2001. For an ultra-rare glimpse into Green’s early days, check out his 1995 short Will You Lather Up My Roughouse?, screening in the Rat Pack Rat shorts program. 2014 SXSW Film Festival. (MK)

is the work of the Georgian-German writing-directing team of Nana Ekvtimishvili and Simon Gross. “The childhood innocence in the eyes of [Eka and Natia] melts away as they’re forced to make terrible choices, the bubble of girlhood punctured by huge social forces. The movie never, ever makes a wrong move, and many sequences are as good as anything in recent cinema.” (Robert Kohler, Artforum. “Astute, observant…tough and unsentimental…“In Bloom,” [balances] a strong, implicit feminist sensibility with a sympathetic sense of the power of tradition.” (A.O. Scott, NY Times). 2013 Berlin, Vancouver, and Karlovy Vary Film Festivals. (JH)

“It’s only a movie” is a phrase that Kumiko either does not want to hear or cannot understand. Alienated from her family and depressed and frustrated with her job as a Tokyo office lady, Kumiko has become obsessed with the 1996 Joel and Ethan Coen movie, Fargo. She watches the film endlessly on her tiny television, drawing maps and diagrams in the process. Perhaps spurred on by the Coen’s tongue-in-cheek assertion that Fargo is a “true story,” Kumiko desperately uses a company credit card to fly from Japan to Minneapolis in search of the ransom money buried by Steve Buscemi at the end of the movie. Once she lands, the young woman faces a typically fierce Minnesota winter and a serious language barrier on the road to North Dakota. Offbeat, funny, and lyrically beautiful, this is the third feature by two other cinematic siblings, David and Nathan Zellner (Kid-Thing, Goliath). Their sometimes haunting depiction of a determined lone dreamer in the wintry Midwest recalls Werner Herzog’s Stroszek (WFF 2009) and is anchored by the amazing performance by Rinko Kikuchi as the title character. 2014 Sundance, Berlin, and SXSW Film Festivals. (JH) 17