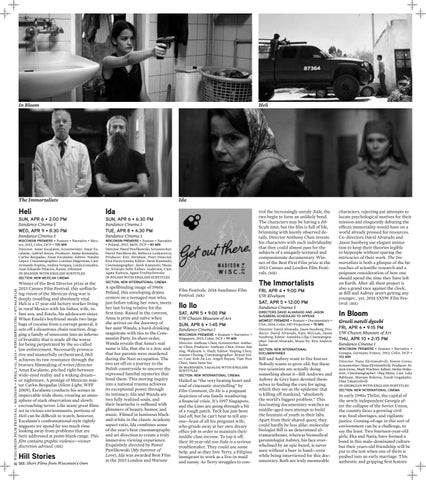 Winner of the Best Director prize at the 2013 Cannes Film Festival, this unflinching vision of the Mexican drug war is deeply troubling and absolutely vital. Heli is a 17 year-old factory worker living in rural Mexico with his father, wife, infant son, and Estela, his adolescent sister. When Estela’s boyfriend steals two large bags of cocaine from a corrupt general, it sets off a disastrous chain reaction, dragging a family of innocents into an inferno of brutality that is made all the worse for being perpetrated by the so-called law enforcement. Necessarily provocative and masterfully orchestrated, Heli achieves its raw resonance through the bravura filmmaking of writer/director Amat Escalante, pitched right between wide-eyed reality and a waking dream— or nightmare. A protégé of Mexican master Carlos Reygadas (Silent Light, WFF 2009), Escalante conducts his scenes in impeccable wide shots, creating an atmosphere of stark observation and slowly encroaching terror. Like many great films set in vicious environments, portions of Heli can be difficult to watch; however, Escalante’s confrontational style rightly suggests we spend far too much time looking away from problems that are here addressed at point-blank range. This film contains graphic violence—viewer discretion advised. (MK)

16 SEE: Short Films from Wisconsin’s Own

trol the increasingly unruly Jiale, the two begin to form an unlikely bond. The characters may be having a difficult time, but the film is full of life, brimming with keenly observed details. Director Anthony Chen invests his characters with such individuality that they could almost pass for the subjects of a uniquely textured and compassionate documentary. Winner of the Best First Film prize at the 2013 Cannes and London Film Festivals. (MK)

A spellbinding image of 1960s Poland, this enveloping drama centers on a teenaged nun who, just before taking her vows, meets her last living relative for the first time. Raised in the convent, Anna is prim and naïve when she arrives on the doorstep of her aunt Wanda, a hard-drinking magistrate with ties to the Communist Party. In short order, Wanda reveals that Anna’s real name is Ida, that she is a Jew, and that her parents were murdered during the Nazi occupation. The two set off on a journey to the Polish countryside to uncover the repressed familial mysteries that bond them. This moving inquiry into a national trauma achieves its exceptional power through its intimacy; Ida and Wanda are two fully realized souls, and their heartache is suffused with glimmers of beauty, humor, and music. Filmed in luminous blackand-white in the classic Academy aspect ratio, Ida combines some of the year’s best cinematography and art direction to create a truly immersive viewing experience. Exquisitely directed by Pawel Pawlikowski (My Summer of Love), Ida was awarded Best Film at the 2013 London and Warsaw

Hailed as “the very beating heart and soul of cinematic storytelling” by Film Comment, Ilo Ilo is a poignant depiction of one family weathering a financial crisis. It’s 1997 Singapore, and the Lims are going through a bit of a rough patch. Teck has just been laid off, but he can’t bear to tell anyone—least of all his pregnant wife, who grinds away at her own dreary office job in order to maintain their middle class income. To top it off, their 10 year-old son Jiale is a serious troublemaker. They could use some help, and so they hire Terry, a Filipino immigrant to work as a live-in maid and nanny. As Terry struggles to con-

Bill and Aubrey want to live forever. Nobody wants to grow old, but these two scientists are actually doing something about it—Bill Andrews and Aubrey de Grey have devoted themselves to finding the cure for aging, which they see as the epidemic that is killing off mankind, “absolutely the world’s biggest problem.” This fascinating documentary watches as middle-aged men attempt to build the fountain of youth in their labs. Apart from their shared quest, they could hardly be less alike: molecular biologist Bill is an determined ultramarathoner, whereas biomedical gerontologist Aubrey, his face overwhelmed by an epic beard, is never seen without a beer in hand—even while being interviewed for this documentary. Both are truly memorable

characters, rejecting pat attempts to locate psychological motives for their mission and eloquently debating the effects immortality would have on a world already pressed for resources. Co-directors David Alvarado and Jason Sussberg use elegant animation to keep their theories legible to laypeople without sparing the intricacies of their work. The Immortalists is both a glimpse of the far reaches of scientific research and a poignant consideration of how one should spend the time they have left on Earth. After all, their project is also a grand race against the clock, as Bill and Aubrey aren’t getting any younger… yet. 2014 SXSW Film Festival. (MK)

In early 1990s Tbilisi, the capital of the newly independent Georgia after the collapse of the Soviet Union, the country faces a growing civil war, food shortages, and vigilante justice. Coming-of-age in this sort of environment can be a challenge, to say the least. Two fourteen-year-old girls, Eka and Natia, have formed a bond in this male-dominated culture but their years-old friendship will be put to the test when one of them is pushed into an early marriage. This authentic and gripping first feature