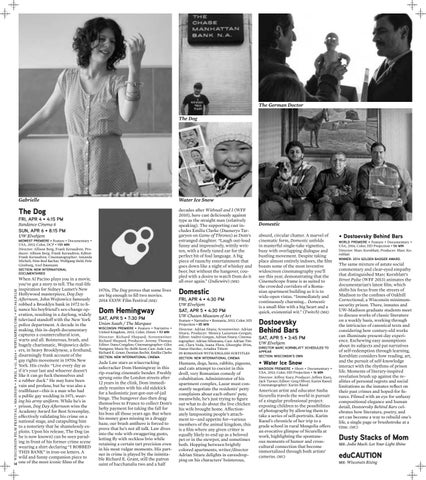 The German Doctor The Dog

decades after Withnail and I (WFF 2010), here cast deliciously against type as the straight man (relatively speaking). The supporting cast includes Emilia Clarke (Daenerys Targaryen on Game of Thrones) as Dom’s estranged daughter. “Laugh out-loud funny and impressively, wittily written, with a finely tuned ear for the perfect bit of foul language. A big piece of raunchy entertainment that goes down like a night of whiskey and beer, but without the hangover, coupled with a desire to watch Dom do it all over again.” (Indiewire) (MK)

When Al Pacino plays you in a movie, you’ve got a story to tell. The real-life inspiration for Sidney Lumet’s New Hollywood masterpiece, Dog Day Afternoon, John Wojtowicz famously robbed a Brooklyn bank in 1972 to finance his boyfriend’s sex-change operation, resulting in a daylong, widely televised standoff with the New York police department. A decade in the making, this in-depth documentary captures a countercultural icon, warts and all. Boisterous, brash, and hugely charismatic, Wojtowicz delivers, in heavy Brooklynese, a firsthand, disarmingly frank account of the gay rights movement in 1970s New York. His credo: “Live every day as if it’s your last and whoever doesn’t like it can go fuck themselves and a rubber duck.” He may have been vain and profane, but he was also a trailblazer—this is a man who had a public gay wedding in 1971, wearing his army uniform. While he’s in prison, Dog Day Afternoon wins the Academy Award for Best Screenplay, effectively validating his crime on a national stage, and catapulting him to a notoriety that he shamelessly exploits. Upon his release, The Dog (as he is now known) can be seen parading in front of his former crime scene wearing a shirt declaring “I ROBBED THIS BANK” in iron-on letters. A wild and funny companion piece to 14 one of the most iconic films of the

Jude Law stars as wisecracking safecracker Dom Hemingway in this rip-roaring cinematic bender. Freshly sprung onto the London streets after 12 years in the clink, Dom immediately reunites with his old sidekick for a hedonistic just-got-out-of-jail binge. The hungover duo then drag themselves to France to collect Dom’s hefty payment for taking the fall for his boss all those years ago. But when his money goes missing in a druggy haze, our brash antihero is forced to prove that he’s not all talk. Law dives into the role with swaggering gusto, letting fly with reckless brio while retaining a certain tart precision even in his most vulgar moments. His partner in crime is played by the inimitable Richard E. Grant, still the patron saint of bacchanalia two and a half

Humans, dogs, hens, rabbits, pigeons, and cats attempt to coexist in this droll, very Romanian comedy of cohabitation. Administrator of his apartment complex, Lazar must constantly negotiate the residents’ petty complaints about each others’ pets; meanwhile, he’s just trying to figure out what to do about the live chicken his wife brought home. Affectionately lampooning people’s attachment to—and appetite for—various members of the animal kingdom, this is a film where any given critter is equally likely to end up as a beloved pet or in the stewpot, and sometimes both. Hopping between brightly colored apartments, writer/director Adrian Sitaru delights in eavesdropping on his characters’ boisterous,

Domestic absurd, circular chatter. A marvel of cinematic form, Domestic unfolds in masterful single-take vignettes, busy with overlapping dialogue and bustling movement. Despite taking place almost entirely indoors, the film boasts some of the most inventive widescreen cinematography you’ll see this year, demonstrating that the CinemaScope frame is as suited to the crowded corridors of a Romanian apartment building as it is to wide-open vistas. “Immediately and continuously charming… Domestic is a small film with a big heart and a quick, existential wit.” (Twitch) (MK)

American artist and educator Sasha Sicurella travels the world in pursuit of a singular professional project: exposing children to the possibilities of photography by allowing them to take a series of self-portraits. Karim Raoul’s chronicle of her trip to a grade school in rural Mongolia offers an evocative glimpse of Sicurella at work, highlighting the spontaneous moments of humor and crosscultural connection that become immortalized through both artists’ cameras. (MC)

The same mixture of astute social commentary and clear-eyed empathy that distinguished Marc Kornblatt’s Street Pulse (WFF 2013) animates the documentarian’s latest film, which shifts his focus from the streets of Madison to the confines of Oakhill Correctional, a Wisconsin minimumsecurity prison. There, inmates and UW-Madison graduate students meet to discuss works of classic literature on a weekly basis, working through the intricacies of canonical texts and considering how century-old works can illuminate present-day experience. Eschewing easy assumptions about its subjects and pat narratives of self-redemption through learning, Kornblatt considers how reading, art, and the pursuit of self-knowledge interact with the rhythms of prison life. Moments of literary-inspired revelation brush up against the realities of personal regrets and social limitations as the inmates reflect on their past crimes and hoped-for futures. Filmed with an eye for unfussy compositional elegance and human detail, Dostoevsky Behind Bars celebrates how literature, poetry, and art can become a way to rebuild one’s life, a single page or brushstroke at a time. (MC)