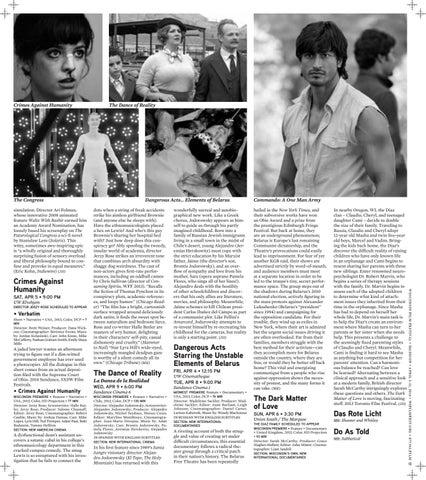 The Dance of Reality

The Congress simulation. Director Ari Folman, whose innovative 2008 animated feature Waltz With Bashir earned him an Academy Award Nomination, has loosely based his screenplay on The Futurological Congress a sci-fi novel by Stanislaw Lem (Solaris). This witty, sometimes awe-inspiring epic is “a wholly original and thoroughly surprising fusion of sensory overload and liberal philosophy bound to confuse and provoke in equal measures.” (Eric Kohn, Indiewire) (JH)

A jaded lawyer wastes an afternoon trying to figure out if a dim-witted government employee has ever used a photocopier. All the dialogue in this short comes from an actual deposition filed with the Supreme Court of Ohio. 2014 Sundance, SXSW Film Festivals.

A dysfunctional dean’s assistant uncovers a satanic cabal in his college’s ethnomusicology department in this cracked campus comedy. The smug Lewis is so enraptured with his investigation that he fails to connect the

dots when a string of freak accidents strike his aimless girlfriend Brownie (and anyone else he sleeps with). Have the ethnomusicologists placed a hex on Lewis? And who’s this guy Brownie’s sharing her hospital bed with? Just how deep does this conspiracy go? Ably spoofing the tweedy, insular world of academia, director Jerzy Rose strikes an irreverent tone that combines arch absurdity with shaggy dog weirdness. The cast of non-actors gives first-rate performances, including an oddball cameo by Chris Sullivan (director of Consuming Spirits, WFF 2013). “Recalls the fiction of Thomas Pynchon in its conspiracy plots, academic references, and loopy humor.” (Chicago Reader) “The film has a bright, cartoonish surface wrapped around deliciously dark satire; it finds the sweet spot between naturalism and bedroom farce. Rose and co-writer Halle Butler are masters of wry humor, delighting in their characters’ self-pity, casual dishonesty and cruelty.” (Hammer to Nail) “Star Lyra Hill’s wide-eyed, increasingly mangled deadpan gaze is worthy of a silent comedy all its own.” (Chicago Tribune) (MK)

wonderfully surreal and autobiographical new work. Like a Greek chorus, Jodorowsky appears as himself to guide us through his partly imagined childhood. Born into a family of Russian Jewish immigrants living in a small town in the midst of Chile’s desert, young Alejandro (Jeremias Herskowitz) must cope with the strict education by his Marxist father, Jaime (the director’s son, Brontis Jodorowsky), and an overflow of sympathy and love from his mother, Sara (opera soprano Pamela Flores, who sings all of her lines!). Alejandro deals with the hostility of other schoolchildren and discovers that his only allies are literature, movies, and philosophy. Meanwhile, Jaime schemes to kill Chilean president Carlos Ibañez del Campo as part of a communist plot. Like Fellini’s Amarcord, Jodorowsky attempts to re-invent himself by re-recreating his childhood for the cameras, but reality is only a starting point. (JH)

The Dance of Reality

In his first feature since 1989’s Santa Sangre visionary director Alejandro Jodorowsky (El Topo, The Holy Mountain) has returned with this

A riveting account of both the struggle and value of creating art under difficult circumstances, this essential documentary follows a radical theater group through a critical patch in their nation’s history. The Belarus Free Theatre has been repeatedly

Commando: A One Man Army hailed in the New York Times, and their subversive works have won an Obie Award and a prize from the prestigious Edinburgh Fringe Festival. But back at home, they are an underground phenomenon; Belarus is Europe’s last remaining Communist dictatorship, and the Theatre’s provocations could easily lead to imprisonment. For fear of yet another KGB raid, their shows are advertised strictly by word-of-mouth, and audience members must meet at a separate location in order to be led to the troupe’s tiny, secret performance space. The group steps out of the shadows during Belarus’s 2010 national election, actively figuring in the mass protests against Alexander Lukashenko (Belarus’s “president” since 1994) and campaigning for the opposition candidate. For their trouble, they wind up as exiles in New York, where their art is admired but the urgent social issues driving it are often overlooked. Far from their families, members struggle with the best method for their activism—can they accomplish more for Belarus outside the country, where they are free, or would they be better off back home? This vital and energizing communiqué from a people who rise against oppression shows the necessity of protest, and the many forms it can take. (MK)

In nearby Oregon, WI, the Diaz clan – Claudio, Cheryl, and teenaged daughter Cami – decide to double the size of their family. Traveling to Russia, Claudio and Cheryl adopt 12-year old Masha and twin five-year old boys, Marcel and Vadim. Bringing the kids back home, the Diaz’s discover the difficult reality of raising children who have only known life in an orphanage and Cami begins to resent sharing her parents with three new siblings. Enter renowned neuropsychologist Dr. Robert Marvin, who begins a series of therapy sessions with the family. Dr. Marvin begins to assess each of the adopted children to determine what kind of attachment issues they inherited from their time in the orphanage. Since Masha has had to depend on herself her whole life, Dr. Marvin’s main task is to help the Diaz’s create an environment where Masha can turn to her parents or her sister when she needs help. This presents a challenge to the seemingly fixed parenting styles of Claudio and Cheryl. Meanwhile, Cami is finding it hard to see Masha as anything but competition for her parents’ attention. Can a harmonious balance be reached? Can love be learned? Alternating between a clinical approach and a sensitive look at a modern family, British director Sarah McCarthy intriguingly explores these questions and others. The Dark Matter of Love is moving, fascinating stuff. 2013 Toronto Film Festival. (JH)

Do As Told SEE: Sabbatical