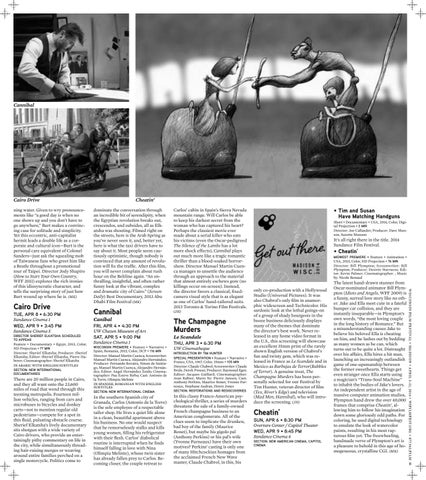 dominate the conversation through an incredible bit of serendipity, when the Egyptian revolution breaks out, crescendos, and subsides, all as Elkatsha was shooting. Filmed right on the streets, here is the Arab Spring as you’ve never seen it, and, better yet, here is what the taxi drivers have to say about it. Most people seem cautiously optimistic, though nobody is convinced that any amount of revolution will fix the traffic. After this film, you will never complain about rush hour on the Beltline again. “An enthralling, insightful, and often rather funny look at the vibrant, complex and dramatic city of Cairo.” (Screen Daily) Best Documentary, 2013 Abu Dhabi Film Festival (MK)

Carlos’ cabin in Spain’s Sierra Nevada mountain range. Will Carlos be able to keep his darkest secret from the woman who has captured his heart? Perhaps the classiest movie ever made about a serial killer who eats his victims (even the Oscar-pedigreed The Silence of the Lambs has a lot more shock effects), Cannibal plays out much more like a tragic romantic thriller than a blood-soaked horrorshow. Director Manuel Martin Cuenca manages to unsettle the audience through an approach to the material that almost entirely eschews gore (no killings occur on-screen). Instead, the director favors a classical, fixedcamera visual style that is as elegant as one of Carlos’ hand-tailored suits. 2013 Toronto &amp; Torino Film Festivals.

There are 20 million people in Cairo, and they all want onto the 23,600 miles of road that wend through this teeming metropolis. Fourteen million vehicles, ranging from cars and microbuses to bicycles and donkey carts—not to mention regular old pedestrians—compete for a spot in this fluid, pulsating obstacle course. Sherief Elkatsha’s lively documentary sits shotgun with a wide variety of Cairo drivers, who provide an entertainingly pithy commentary on life in the city, while simultaneously threading hair-raising merges or weaving around entire families perched on a single motorcycle. Politics come to

In the southern Spanish city of Granada, Carlos (Antonio de la Torre) is the sole employee of a respectable tailor shop. He lives a quiet life alone in a clean, beautiful apartment above his business. No one would suspect that he remorselessly stalks and kills young women, filling his refrigerator with their flesh. Carlos’ diabolical routine is interrupted when he finds himself falling in love with Nina (Olimpia Melinte), whose twin sister has already fallen prey to Carlos. Becoming closer, the couple retreat to

In this classy Franco-American psychological thriller, a series of murders threatens the sale of a family-owned French champagne business to an American conglomerate. All of the clues seem to implicate the drunken, bad boy of the family (Maurice Ronet), but maybe his gigolo pal (Anthony Perkins) or his pal’s wife (Yvonne Furneaux) have their own motives? Perkins’ casting is only one of many Hitchcockian homages from the acclaimed French New Wave master, Claude Chabrol, in this, his

It’s all right there in the title. 2014 Sundance Film Festival.

only co-production with a Hollywood Studio (Universal Pictures). It was also Chabrol’s only film in anamorphic widescreen and Technicolor. His sardonic look at the lethal goings-on of a group of shady bourgeois in the booze business deliciously displays many of the themes that dominate the director’s best work. Never released in any home video format in the U.S., this screening will showcase an excellent 35mm print of the rarely shown English version of Chabrol’s fun and twisty gem, which was released in France as Le Scandale and in Mexico as Burbujas de Terror(Bubbles of Terror). A genuine treat, The Champagne Murders has been personally selected for our Festival by Tim Hunter, veteran director of film (Tex, River’s Edge) and television (Mad Men, Hannibal), who will introduce the screening. (JH)

The latest hand-drawn stunner from Oscar-nominated animator Bill Plympton (Idiots and Angels, WFF 2009) is a funny, surreal love story like no other. Jake and Ella meet cute in a fateful bumper car collision, and they are instantly inseparable—in Plympton’s own words, “the most loving couple in the long history of Romance.” But a misunderstanding causes Jake to believe his beloved Ella is cheating on him, and he lashes out by bedding as many women as he can, which turns out to be quite a lot. Distraught over his affairs, Ella hires a hit man, launching an increasingly outlandish game of one-upsmanship between the former sweethearts. Things get even stranger once Ella starts using a magician’s “Trans-Soul Machine” to inhabit the bodies of Jake’s lovers. An independent artist in the age of massive computer animation studios, Plympton hand drew the over 40,000 frames that comprise Cheatin’, allowing him to follow his imagination down some gloriously odd paths. For coloring, he used digital technology to emulate the look of watercolor paints, resulting in his most rapturous film yet. The freewheeling, handmade verve of Plympton’s art is a pleasure to behold in this age of homogeneous, crystalline CGI. (MK)

ning water. Given to wry pronouncements like “a good day is when no one shows up and you don’t have to go anywhere,” Burt makes a convincing case for solitude and simplicity. Yet this eccentric, anti-capitalist hermit leads a double life as a corporate and cultural icon—Burt is the personal care equivalent of Colonel Sanders—just ask the squealing mob of Taiwanese fans who greet him like a Beatle throughout a promotional tour of Taipei. Director Jody Shapiro (How to Start Your Own Country, WFF 2011) explores the rich ironies of this idiosyncratic character, and tells the surprising story of just how Burt wound up where he is. (MK)