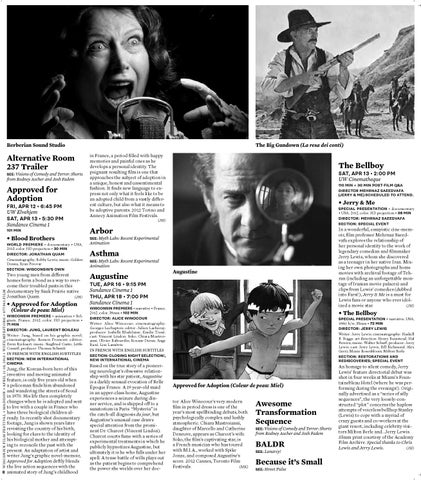 The Big Gundown (La resa dei conti) in France, a period ﬁlled with happy memories and painful ones as he develops a personal identity. The poignant resulting ﬁlm is one that approaches the subject of adoption in a unique, honest and unsentimental fashion. It ﬁnds new language to express not only what it feels like to be an adopted child from a vastly different culture, but also what it means to be adoptive parents. 2012 Torino and Annecy Animation Film Festivals.

Two young men from different homes form a bond as a way to overcome their troubled pasts in this documentary by Sauk Prairie native Jonathan Quam. (JH)

Jung, the Korean-born hero of this inventive and moving animated feature, is only ﬁve years old when a policeman ﬁnds him abandoned and wandering the streets of Seoul in 1970. His life then completely changes when he is adopted and sent to live with a couple in France who have three biological children already. In recently shot documentary footage, Jung is shown years later revisiting the country of his birth, looking for clues to the identity of his biological mother and attempting to reconcile the past with the present. An adaptation of artist and writer Jung’s graphic novel-memoir, Approved for Adoption deftly blends the live action sequences with the 8 animated story of Jung’s childhood

In a wonderful, essayistic cine-memoir, ﬁlm professor Mehrnaz Saeedvafa explores the relationship of her personal identity to the work of legendary comedian and ﬁlmmaker Jerry Lewis, whom she discovered as a teenager in her native Iran. Mixing her own photographs and home movies with archival footage of Tehran (including an unforgettable montage of Iranian movie palaces) and clips from Lewis’ comedies (dubbed into Farsi!), Jerry &amp; Me is a must for Lewis fans or anyone who ever idolized a movie star. (JH)

Based on the true story of a pioneering neurologist’s obsessive relationship with his star patient, Augustine is a darkly sensual evocation of Belle Époque France. A 19 year-old maid in an upper-class home, Augustine experiences a seizure during dinner service, and is shipped off to a sanatorium in Paris. “Hysteria” is the catch-all diagnosis du jour, but Augustine’s unusual case draws special attention from the prominent Dr. Charcot (Vincent Lindon). Charcot courts fame with a series of experimental treatments in which he publicly hypnotizes Augustine, but ultimately it is he who falls under her spell. A tense battle of wills plays out as the patient begins to comprehend the power she wields over her doc-

An homage to silent comedy, Jerry Lewis’ feature directorial debut was shot in four weeks at Miami’s Fountainebleau Hotel (where he was performing during the evenings!). Originally advertised as a “series of silly sequences”, the very loosely-constructed “plot” concerns the hapless attempts of voiceless bellhop Stanley (Lewis) to cope with a myriad of crazy guests and co-workers at the giant resort, including celebrity visitors Milton Berle and…Jerry Lewis. 35mm print courtesy of the Academy Film Archive. Special thanks to Chris Lewis and Jerry Lewis. (JH)