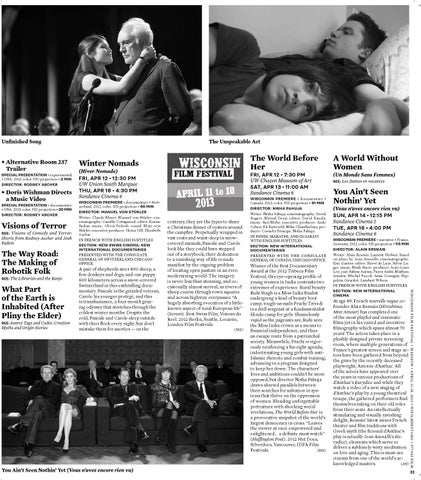 Visions of Terror SEE: Visions of Comedy and Terror: Shorts from Rodney Ascher and Josh Fadem

The Way Road: The Making of Robotik Folk SEE: The Librarian and the Banjo

A pair of shepherds steer 800 sheep, a few donkeys and dogs, and one puppy 600 kilometers across a snow-covered Switzerland in this enthralling documentary. Pascale is the grizzled veteran, Carole his younger protégé, and this is transhumance, a four-month grazing odyssey that stretches through the coldest winter months. Despite the cold, Pascale and Carole sleep outside with their ﬂock every night, but don’t mistake them for ascetics — on the

contrary, they are the types to share a Christmas dinner of oysters around the campﬁre. Perpetually wrapped in vast coats and waist-deep in snowcovered animals, Pascale and Carole look like they could have stepped out of a storybook; their dedication to a vanishing way of life is made manifest by the ongoing problem of locating open pasture in an evermodernizing world. The imagery is never less than stunning, and occasionally almost surreal, as rivers of sheep course through town squares and across highway overpasses. “A hugely absorbing evocation of a littleknown aspect of rural European life” (Screen). Best Swiss Film, Visions du Reel. 2012 Berlin, Seattle, Locarno, London Film Festivals. (MK)

The World Before Her

A World Without Women

Winner of the Best Documentary Award at the 2012 Tribeca Film Festival, this eye-opening proﬁle of young women in India contrasts two extremes of experience. Rural beauty Ruhi Singh is a Miss India ﬁnalist undergoing a kind of beauty boot camp; tough-as-nails Prachi Trivedi is a drill sergeant at a fundamentalist Hindu camp for girls. Shamelessly vapid as the pageants are, Ruhi sees the Miss India crown as a means to ﬁnancial independence, and thus an escape route from a patriarchal society. Meanwhile, Prachi is vigorously reinforcing a far-right agenda, indoctrinating young girls with antiIslamic rhetoric and combat training, advancing in a program designed to keep her down. The characters’ lives and ambitions couldn’t be more opposed, but director Nisha Pahuja draws shrewd parallels between their searches for salvation in systems that thrive on the oppression of women. Blending unforgettable portraiture with shocking social revelations, The World Before Her is a provocative snapshot of the world’s largest democracy in crisis. “Leaves the viewer at once empowered and enlightened… a deﬁnite must watch” (Hufﬁngton Post). 2012 Hot Docs, Silverdocs, Vancouver, IDFA Film Festivals. (MK)

At age 89, French nouvelle vague cofounder Alain Resnais (Hiroshima, Mon Amour) has completed one of the most playful and cinematic ﬁlms yet in his varied and inventive ﬁlmography which spans almost 70 years! The action takes place in a plushly designed private screening room, where multiple generations of France’s greatest screen and stage actors have been gathered from beyond the grave by the recently deceased playwright, Antoine d’Anthac. All of the actors have appeared over the years in various productions of d’Anthac’s Eurydice and while they watch a video of a new staging of d’Anthac’s play by a young theatrical troupe, the gathered performers ﬁnd themselves taking on their old roles from their seats. An intellectually stimulating and visually ravishing delight, Resnais’ latest mixes French theater and ﬁlm traditions with Greek myth (the ﬁcional d’Anthac’s play is actually Jean Anouilh’s Eurydice), elements which serve to deliver a sublimely witty meditation on love and aging. This is must-see cinema from one of the world’s acknowledged masters. (JH)

What Part of the Earth is Inhabited (After Pliny the Elder)