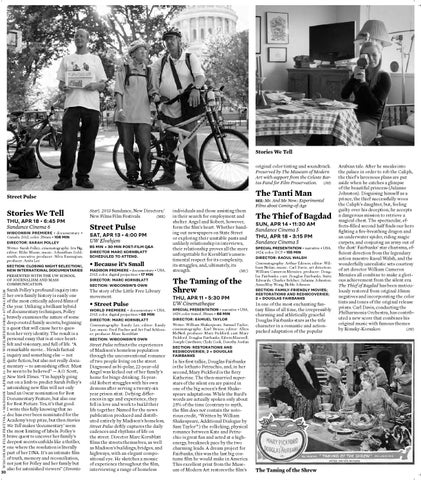 Stories We Tell original color tinting and soundtrack. Preserved by The Museum of Modern Art with support from the Celeste Bartos Fund for Film Preservation. (JH)

Sarah Polley’s profound inquiry into her own family history is easily one of the most critically adored ﬁlms of the year. Utilizing a brilliant hybrid of documentary techniques, Polley bravely examines the nature of some deep-rooted family secrets, beginning a quest that will cause her to question her very identity. The result is a personal essay that is at once heartfelt and visionary, and full of life. “A remarkable movie… blends factual inquiry and something else — not quite ﬁction, but also not really documentary — to astonishing effect. Must be seen to be believed” — A.O. Scott, New York Times. “I’m happily going out on a limb to predict Sarah Polley’s astonishing new ﬁlm will not only land an Oscar nomination for Best Documentary Feature, but also one for Best Picture. Yes, it’s that good. I write this fully knowing that no doc has ever been nominated for the Academy’s top prize, but then Stories We Tell makes ‘documentary’ seem the most limiting of labels. Polley’s brave quest to uncover her family’s deepest secrets unfolds like a thriller, one where the resolution is literally part of her DNA. It’s an intimate ﬁlm of truth, memory and reconciliation, not just for Polley and her family but also for astonished viewers” (Toronto

The story of the Little Free Library movement.

Street Pulse refracts the experiences of Madison’s homeless population through the unconventional romance of two people living on the street. Diagnosed as bi-polar, 22-year-old Angel was kicked out of her family’s home for binge drinking. 51-yearold Robert struggles with his own demons after serving a twenty-six year prison stint. Defying differences in age and experience, they fell in love and work to build their life together. Named for the news publication produced and distributed entirely by Madison’s homeless, Street Pulse deftly captures the daily cadences and rhythms of life on the street. Director Marc Kornblatt ﬁlms the streets themselves, as well as Madison’s buildings, bridges, and highways, with an elegant compositional eye. He sketches a mosaic of experience throughout the ﬁlm, interviewing a range of homeless

individuals and those assisting them in their search for employment and shelter. Angel and Robert, however, form the ﬁlm’s heart. Whether handing out newspapers on State Street or exploring their unstable pasts and unlikely relationship in interviews, their relationship proves all the more unforgettable for Kornblatt’s unsentimental respect for its complexity, its struggles, and, ultimately, its strength. (MC)

In his ﬁrst talkie, Douglas Fairbanks is the lothario Petruchio, and, in her second, Mary Pickford is the ﬁery Katherine. The then-married superstars of the silent era are paired in one of the big screen’s ﬁrst Shakespeare adaptations. While the Bard’s words are actually spoken only about 25% of the time (contrary to myth, the ﬁlm does not contain the notorious credit, “Written by William Shakespeare, Additional Dialogue by Sam Taylor”!) the rollicking, physical romance between Kate and Petruchio is great fun and acted at a highenergy, breakneck pace by the two charming leads. A dream project for Fairbanks, this was the last big costume ﬁlm he would make in America. This excellent print from the Museum of Modern Art restores the ﬁlm’s

SEE: Me. And Me Now.: Experimental Films about Coming-of-Age

In one of the most enchanting fantasy ﬁlms of all time, the irrepressibly charming and athletically graceful Douglas Fairbanks stars as the title character in a romantic and actionpacked adaptation of the popular

The Taming of the Shrew

Arabian tale. After he sneaks into the palace in order to rob the Caliph, the thief’s larcenous plans are put aside when he catches a glimpse of the beautiful princess (Julanne Johnston). Disguising himself as a prince, the thief successfully woos the Caliph’s daughter, but, feeling guilty over his deception, he accepts a dangerous mission to retrieve a magical chest. The spectacular, effects-ﬁlled second half ﬁnds our hero ﬁghting a ﬁre-breathing dragon and an underwater spider, riding magic carpets, and conjuring an army out of the dust! Fairbanks’ star charisma, efﬁcient direction from the legendary action maestro Raoul Walsh, and the wonderfully unrealistic sets courtesy of art director William Cameron Menzies all combine to make a glorious achievement from the silent era. The Thief of Bagdad has been meticulously restored from original 35mm negatives and incorporating the color tints and tones of the original release prints. Carl Davis, conducting the Philharmonia Orchestra, has contributed a new score that combines his original music with famous themes by Rimsky-Korsakov. (JH)