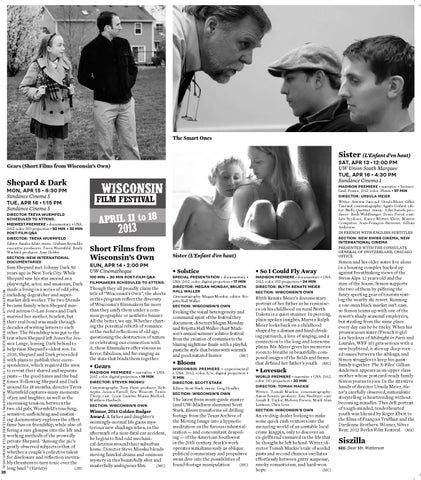 Gears (Short Films from Wisconsin’s Own)

Sam Shepard met Johnny Dark 50 years ago in New York City. While Shepard saw his star ascend as a playwright, actor, and musician, Dark made a living in a series of odd jobs, including dogcatcher and supermarket deli worker. The two friends became family when Shepard married actress O-Lan Jones and Dark married her mother, Scarlett, but their real bond was made through decades of writing letters to each other. The friendship was put to the test when Shepard left Jones for Jessica Lange, leaving Dark behind to help raise Shepard’s oldest son. In 2010, Shepard and Dark proceeded with plans to publish their correspondence, which required the men to revisit their shared and separate pasts — the good times and the bad times. Following Shepard and Dark around for 18 months, director Treva Wurmfeld captures many moments of joy and laughter, as well as the increasing tension, between the two old pals, Wurmfeld’s touching, sensitive, unﬂinching and unstinting documentary explores the effect fame has on friendship, while also offering a rare glimpse into the life and working methods of the avowedly private Shepard. “Among the pic’s gently observed subjects is that of whether a couple’s collective talent for disclosure and reﬂection inevitably threatens to turn toxic over the long haul.” (Variety) (JH)

Though they all proudly claim the title of “Wisconsin’s Own”, the shorts in this program reﬂect the diversity of Wisconsin’s ﬁlmmakers far more than they unify them under a common geographic or aesthetic banner. All the better, we say. Whether charting the potential rebirth of romance or the rueful reﬂections of old age, questioning the destruction of nature or celebrating our connection with it, these ﬁlmmakers offer visions as ﬁerce, fabulous, and far-ranging as the state that binds them together.

• So I Could Fly Away

Evoking the visual heterogeneity and communal spirit of the festival they document, directors Megan Monday and Brijetta Hall Waller chart Madison’s annual summer solstice festival from the creation of costumes to the blazing nighttime ﬁnale with a playful, pastiche style that brims with warmth and good-natured humor. (MC)

The latest from avant-garde master (and UW-Madison alumnus) Scott Stark, Bloom transforms oil drilling footage from the Texas Archive of the Moving Image into a hypnotic meditation on the furious industrialization — and concomitant despoiling — of the American Southwest in the 20th century. Stark’s work operates simultaneously as oblique political commentary and propulsive swan dive into the possibilities of found-footage manipulation. (MC)

Blyth Renate Meier’s documentary portrait of her father as he reminisces on his childhood on rural North Dakota is a quiet stunner. In piercing, plain-spoken insights, Marvin Ralph Meier looks back on a childhood shaped by a distant and hard-drinking patriarch, a love of singing, and a connection to the long and lonesome plains. Ms. Meier gives his memories room to breathe in beautifully-composed images of the ﬁelds and farms that deﬁned her father’s youth. (MC)

An ex-drug dealer looking to make some quick cash ventures into the menacing world of an unstable local crime kingpin, only to discover an ex-girlfriend ensnared in the life that he thought he left behind. Writer/director Tomah Mackie’s tale of sordid pasts and second chances oscillates effortlessly between gritty suspense, smoky romanticism, and hard-won hope. (MC)

Simon and his older sister live alone in a housing complex backed up against breathtaking views of the Swiss Alps. 12 years old and the man of the house, Simon supports the two of them by pilfering the fancy sporting gear of tourists visiting the nearby ski resort. Running a one-man black market isn’t easy, so Simon teams up with one of the resort’s shady seasonal employees, but stealing from the same place every day can be be tricky. When his promiscuous sister (French it-girl Léa Seydoux of Midnight in Paris and Lourdes, WFF 10) gets serious with a new boyfriend, it stirs up deep-rooted issues between the siblings, and Simon struggles to keep his quasifamily together. The X-Files’ Gillian Anderson appears as an upper class mother whose postcard-ready family Simon yearns to join. In the attentive hands of director Ursula Meier, Sister’s carefully observed, naturalistic storytelling is heartrending without becoming maudlin. This deft portrait of tough-minded, tenderhearted youth was likened by Roger Ebert to the ﬁlms of François Truffaut and the Dardenne Brothers. Winner, Silver Bear, 2012 Berlin Film Festival. (MK)