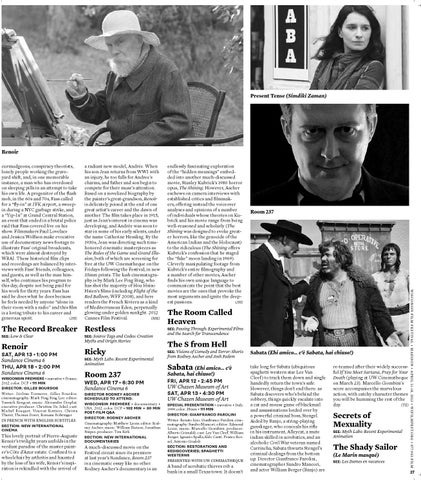 Renoir a radiant new model, Andrée. When his son Jean returns from WWI with an injury, he too falls for Andree’s charms, and father and son begin to compete for their muse’s attention. Based on a novelized biography by the painter’s great-grandson, Renoir is delicately poised at the end of one great artist’s career and the dawn of another. The ﬁlm takes place in 1915, just as Jean’s interest in cinema was developing, and Andrée was soon to star in some of his early silents, under the name Catherine Hessling. By the 1930s, Jean was directing such timehonored cinematic masterpieces as The Rules of the Game and Grand Illusion, both of which are screening for free at the UW Cinematheque on the Fridays following the Festival, in new 35mm prints. The lush cinematography is by Mark Lee Ping Bing, who has shot the majority of Hou Hsiao Hsien’s ﬁlms (including Flight of the Red Balloon, WFF 2008), and here renders the French Riviera as a kind of Mediterranean Eden, perpetually glowing under golden sunlight. 2012 Cannes Film Festival. (MK)

This lovely portrait of Pierre-Auguste Renoir’s twilight years unfolds in the verdant paradise of the master painter’s Côte d’Azur estate. Conﬁned to a wheelchair by arthritis and haunted by the loss of his wife, Renoir’s inspiration is rekindled with the arrival of

A much-discussed movie on the Festival circuit since its premiere at last year’s Sundance, Room 237 is a cinematic essay like no other. Rodney Ascher’s documentary is an

endlessly fascinating exploration of the “hidden meanings” embedded into another much-discussed movie, Stanley Kubrick’s 1980 horror opus, The Shining. However, Ascher eschews on camera interviews with established critics and ﬁlmmakers, offering instead the voiceover analyses and opinions of a number of individuals whose theories on Kubrick and his movie range from being well-reasoned and scholarly (The Shining was designed to evoke greater horrors, like the genocide of the American Indian and the Holocaust) to the ridiculous (The Shining offers Kubrick’s confession that he staged the “fake” moon landing in 1969). Cleverly manipulating footage from Kubrick’s entire ﬁlmography and a number of other movies, Ascher ﬁnds his own unique language to communicate the point that the best movies are the ones that provoke the most arguments and ignite the deepest passions. (JH)

The Room Called Heaven SEE: Passing Through: Experimental Films and the Search for Transcendence

The S from Hell SEE: Visions of Comedy and Terror: Shorts from Rodney Ascher and Josh Fadem

take long for Sabata (ubiquitous spaghetti western star Lee Van Cleef ) to track them down and single handedly return the town’s safe. However, things don’t end there: as Sabata discovers who’s behind the robbery, things quickly escalate into a cat and mouse game of blackmail and assassinations lorded over by a powerful criminal boss, Stengel. Aided by Banjo, a string-playing gunslinger, who conceals his riﬂe in his instrument, Alleycat, a mute indian skilled in acrobatics, and an alcoholic Civil War veteran named Carrincha, Sabata thwarts Stengel’s criminal dealings from the bottom up. Director Gianfranco Parolini, cinematographer Sandro Mancori, and actor William Berger (Banjo) are

A band of acrobatic thieves rob a bank in a small Texas town. It doesn’t

re-teamed after their widely successful If You Meet Sartana, Pray for Your Death (playing at UW Cinematheque on March 23). Marcello Giombini’s score accompanies the marvelous action, with catchy character themes you will be humming the rest of the day. (TE)

curmudgeons, conspiracy theorists, lonely people working the graveyard shift, and, in one memorable instance, a man who has overdosed on sleeping pills in an attempt to take his own life. A progenitor of the ﬂash mob, in the 60s and 70s, Fass called for a “ﬂy-in” at JFK airport, a sweepin during a NYC garbage strike, and a “Yip-In” at Grand Central Station, an event that ended in a brutal police raid that Fass covered live on his show. Filmmakers Paul Lovelace and Jessica Wolfson make evocative use of documentary news footage to illustrate Fass’ original broadcasts, which were almost destroyed by WBAI. These historical ﬁlm clips and recordings are balanced by interviews with Fass’ friends, colleagues, and guests, as well as the man himself, who continues his program to this day, despite not being paid for his work for thirty years. Fass has said he does what he does because he feels needed by anyone “alone in their room with a radio” and this ﬁlm is a loving tribute to his career and generous spirit. (JH)