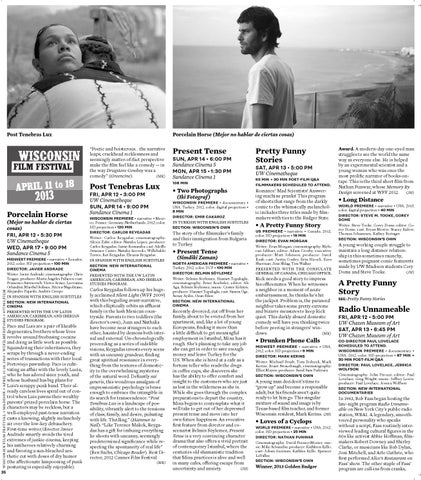 Paco and Luis are a pair of likeable degenerates, brothers whose lives revolve around freebasing cocaine and doing as little work as possible. Squandering their inheritances, they scrape by through a never-ending series of transactions with their local Portoviejo pawnshop. Paco is cultivating an affair with the lovely Lucia, who he has adored since youth, and whose husband has big plans for Luis’s scrappy punk band. Their already careless lives spiral out of control when Luis pawns their wealthy parents’ prized porcelain horse. The characters may be reckless, but a well-employed past-tense narration casts a knowing, slightly melancholy air over the low-key debauchery. First-time writer/director Javier Andrade smartly avoids the tired extremes of junkie cinema, keeping his antiheroes relatively charming and favoring a sun-bleached aesthetic cut with doses of dry humor (the affectionate lampooning of punk posturing is especially enjoyable).

Carlos Reygadas follows up his hugely acclaimed Silent Light (WFF 2009) with this beguiling avant-narrative, which elliptically orbits an afﬂuent family in the lush Mexican countryside. Parents to two toddlers (the director’s own), Juan and Nathalia have become near strangers to each other, haunted by demons both internal and external. Un-chronologically proceeding as a series of indelible visions, Reygadas invests every scene with an uncanny grandeur, ﬁnding great spiritual resonance in everything from the textures of domesticity to the overwhelming mysteries of the natural word. Deﬁantly sui generis, this wondrous amalgam of impressionistic psychology is brave enough to embrace the intangible in its search for transcendence. “Post Tenebras Lux is a landscape of possibility, vibrantly alert to the tensions of class, family, and desire, pulsating with life. Thrilling.” (Hammer to Nail). “Like Terence Malick, Reygadas has a gift for imbuing everything he shoots with uncanny, seemingly predetermined signiﬁcance while respecting the spontaneity of real life” (Ben Sachs, Chicago Reader). Best Director, 2012 Cannes Film Festival. (MK)

The story of the ﬁlmmaker’s family and their immigration from Bulgaria to Turkey.

Recently divorced, cut off from her family, about to be evicted from her apartment, and, like a lot of young Europeans, ﬁnding it more than a little difﬁcult to get meaningful employment in Istanbul, Mina has it rough. She’s planning to take any job she can get in order to save enough money and leave Turkey for the U.S. When she is hired at a cafe as a fortune teller who reads the dregs in coffee cups, she discovers she has the ability to offer comfort and insight to the customers who are just as lost in the wilderness as she is. While she goes through the complex preparations to depart the country, Mina begins to contemplate what it will take to get out of her depressed present tense and move into her own future happiness. An evocative ﬁrst feature from director and coscenarist Belmin Söylemez, Present Tense is a very convincing character drama that also offers a vivid portrait of contemporary Istanbul, where the centuries old shamanistic tradition that Mina practices is alive and well in many cafes, offering escape from uncertainty and anxiety. (JH)

Romance! Mad Scientists! Answering machine pranks! This program of shorts that range from the darkly comic to the whimsically melancholic includes three titles made by ﬁlmmakers with ties to the Badger State.

Rick needs a good story to impress his ofﬁcemates. When he witnesses a neighbor in a moment of acute embarrassment, he thinks he’s hit the jackpot. Problem is, the paranoid neighbor takes some pretty extreme and bizarre measures to keep Rick quiet. This darkly absurd domestic comedy will have you thinking twice before peering in strangers’ windows. (MK)

A young man decides it’s time to “grow up” and become a responsible adult, but his friends aren’t quite ready to let him go. This singular mixture of sound and image is by Texas-based ﬁlm teacher, and former Wisconsin resident, Mark Kerins. (JH)

Award. A modern-day one-eyed man struggles to see the world the same way as everyone else. He is helped by an experimental scientist and a young woman who was once the most proliﬁc narrator of books-ontape. This is the third short ﬁlm from Nathan Punwar, whose Memory By Design screened at WFF 2012. (JH)