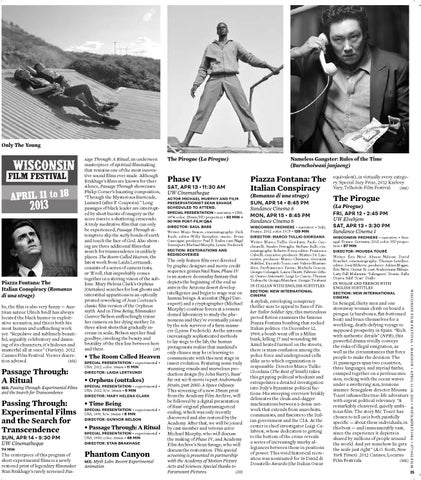 be, the ﬁlm is also very funny — Austrian auteur Ulrich Seidl has always located the black humor in exploitative scenarios, and this is both his most human and unﬂinching work yet. “Repulsive and sublimely beautiful, arguably celebratory and damning of its characters, it’s hideous and masterful all at once” (Variety). 2012 Cannes Film Festival. Viewer discretion advised. (MK)

Passage Through: A Ritual SEE: Passing Through: Experimental Films

and the Search for Transcendence

The only feature ﬁlm ever directed by graphic designer and movie credit sequence genius Saul Bass, Phase IV is an austere doomsday fantasy that depicts the beginning of the end as ants in the Arizona desert develop intelligence and begin to wage war on human beings. A scientist (Nigel Davenport) and a cryptographer (Michael Murphy) combine forces at a remote domed laboratory to study the phenomena and they’re eventually joined by the sole survivor of a farm massacre (Lynne Frederick). As the ants use increasingly sophisticated methods to lay siege to the lab, the human protagonists realize that mankind’s only chance may lie in learning to communicate with this next stage in insect evolution. Featuring some truly stunning visuals and marvelous production design (by John Barry), Bass’ far out sci-ﬁ movie is part Andromeda Strain, part 2001: A Space Odyssey. This screening of a new 35mm print from the Academy Film Archive, will be followed by a digital presentation of Bass’ original phantasmagorical ending, which was only recently discovered and also restored by the Academy. After that, we will be joined by cast member and veteran actor Michael Murphy, who will discuss the making of Phase IV, and Academy Film Archive’s Sean Savage, who will discuss the restoration. This special screening is presented in partnership with the Academy of Motion Picture Arts and Sciences. Special thanks to Paramount Pictures. (JH)

A stylish, enveloping conspiracy thriller sure to appeal to fans of Tinker Tailor Soldier Spy, this meticulous period ﬁction examines the famous Piazza Fontana bombing that rocked Italian politics. On December 12, 1969, a bomb went off in a Milan bank, killing 17 and wounding 88. Amid heated turmoil on the streets, there is mass confusion among the police force and underground cells alike as to which organization is responsible. Director Marco Tullio Giordana (The Best of Youth) takes this gripping political whodunit and extrapolates a detailed investigation into Italy’s Byzantine political factions. His sweeping overview briskly delineates the cloak-and-dagger machinations between a dense network that extends from anarchists, communists, and fascists to the Italian government and the CIA. At the center is chief investigator Luigi Calabresi, whose dedication to getting to the bottom of the crime reveals a series of increasingly murky allegiances between those in positions of power. This vivid historical recreation was nominated for 16 David di Donatello Awards (the Italian Oscar

In Senegal, thirty men and one stowaway woman climb on board a pirogue (a barebones, ﬂat-bottomed boat) and brace themselves for a weeklong, death-defying voyage to supposed prosperity in Spain. “Rich with authentic details” (NPR), this powerful drama vividly conveys the risks of illegal emigration, as well as the circumstances that force people to make the decision. The 31 passengers span two countries, three languages, and myriad faiths; cramped together on a perilous mission, rocking with the ocean waves under a sweltering sun, tensions simmer. Senegalese director Moussa Touré infuses this true-life adventure with urgent political relevancy. “A remarkably cleareyed, quietly ambitious ﬁlm. The story Mr. Touré has chosen to tell us is both painfully speciﬁc — about these individuals, in this boat — and immeasurably vast, since the experience it depicts is shared by millions of people around the world. And yet somehow he gets the scale just right” (A.O. Scott, New York Times). 2012 Cannes, Locarno Film Festivals. (MK)

sage Through: A Ritual, an underseen masterpiece of spiritual ﬁlmmaking that remains one of the most innovative sound ﬁlms ever made. Although Brakhage’s ﬁlms are known for their silence, Passage Through showcases Philip Corner’s haunting composition, “Through the Mysterious Barricade, Lumen I (after F. Couperin).” Long passages of black leader are interrupted by short bursts of imagery as the score rises to a shattering crescendo. A truly meditative ﬁlm that can only be experienced, Passage Through attempts to slip the surly bonds of earth and touch the face of God. Also showing are three additional ﬁlms that search for transcendence in unlikely places. The Room Called Heaven, the latest work from Laida Lertxundi, consists of a series of camera tests, or ‘B’ roll, that improbably comes together in a stirring vision of the sublime. Mary Helena Clark’s Orpheus (Outtakes) searches for lost ghosts and interstitial apparitions in an optically printed reworking of Jean Cocteau’s classic ﬁlm version of the Orpheus myth. And in Time Being, ﬁlmmaker Gunvor Nelson unﬂinchingly trains her camera on her dying mother. In three silent shots that gradually increase in scale, Nelson says her ﬁnal goodbye, invoking the beauty and brutality of the thin line between here and there. (JP)