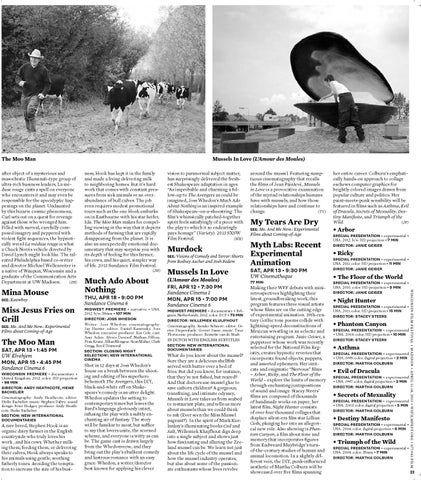 The Moo Man after object of a mysterious and masochistic Illuminati-type group of ultra-rich business leaders, La mèduse rouge casts a spell on everyone who encounters it and may even be responsible for the apocalyptic happenings on the planet. Undaunted by this bizarre cosmic phenomena, Carl sets out on a quest for revenge against those who wronged him. Filled with surreal, carefully composed imagery and peppered with violent ﬁght sequences, the hypnotically weird La mèduse rouge is what a Chuck Norris vehicle directed by David Lynch might look like. The talented Philadelphia based co-writer and director Michael Wellenreiter is a native of Waupun, Wisconsin and a graduate of the Communication Arts Department at UW Madison. (JH)

Miss Jesus Fries on Grill SEE: Me. And Me Now.: Experimental Films about Coming-of-Age

A rare breed, Stephen Hook is an organic dairy farmer in the English countryside who truly loves his work…and his cows. Whether milking them, feeding them, or delivering their calves, Hook always speaks to his animals using gentle, soothing fatherly tones. Avoiding the temptation to increase the size of his busi-

ness, Hook has kept it in the family and made a living delivering milk to neighboring homes. But it’s hard work that comes with constant pressures from sick animals or an overabundance of bull calves. The job even requires modest promotional tours such as the one Hook embarks on in Eastbourne with his star heifer, Ida. The Moo Man makes for compelling viewing in the way that it depicts methods of farming that are rapidly disappearing from the planet. It is also an unexpectedly emotional documentary that may surprise you with its depth of feeling for this farmer, his cows, and his quiet, simpler way of life. 2013 Sundance Film Festival. (JH)

Shot in 12 days at Joss Whedon’s house on a break between the shooting and editing of his superhero behemoth The Avengers, this DIY, black-and-white riff on Shakespeare’s comedy is an utter delight. Whedon updates the setting to contemporary times but leaves the Bard’s language gloriously intact, infusing the play with a subtly enchanting air of fantasy. The story will be familiar to most, but sufﬁce to say that lovers unite, the scorned scheme, and everyone is witty as can be. The game cast is drawn largely from the Whedonverse, and they bring out the play’s ebullient comedy and lustrous romance with an easy grace. Whedon, a writer/director best known for applying his clever

vision to paranormal subject matter, has surprisingly delivered the freshest Shakespeare adaptation in ages. “As improbable and charming a follow-up to The Avengers as could be imagined, Joss Whedon’s Much Ado About Nothing is an inspired example of Shakespeare-on-a-shoestring. The ﬁlm’s whimsically patched-together spirit feels satisfyingly of a piece with the play to which it so endearingly pays homage” (Variety). 2013 SXSW Film Festival. (MK)

What do you know about the mussel? Sure they are a delicious shellﬁsh served with butter over a bed of fries. But did you know, for instance, that they’re not ﬁshed, but reared? And that doctors use mussel glue to save unborn children? A gorgeous, transﬁxing, and intimate odyssey, Mussels in Love takes us from seabed to restaurant plate, and tells us more about mussels than we could think to ask (Ever seen the Miss Mussel pageant?). In the spirit of Mark Kurlanksy’s illuminating books Cod and Salt, Willemiek Kluijfhout digs deep into a single subject and shows just how fascinating and alluring the Zeeland mussel can be. We learn not just about the life cycle of the mussel and how the mussel industry operates, but also about some of the passionate enthusiasts whose lives revolve

around the mussel. Featuring sumptuous cinematography that recalls the ﬁlms of Jean Painlevé, Mussels in Love is a provocative examination of the myriad relationships humans have with mussels, and how those relationships have and continue to change. (TY)

My Tears Are Dry SEE: Me. And Me Now.: Experimental Films about Coming-of-Age

Making their WFF debuts with miniretrospectives highlighting their latest, groundbreaking work, this program features three visual artists whose ﬁlms are on the cutting edge of experimental animation. 19th-century Gothic tone poems collide with lightning-speed deconstructions of Mexican wrestling in an eclectic and entertaining program. Janie Geiser, a puppeteer whose work was recently selected for the National Film Registry, creates hypnotic reveries that incorporate found objects, puppets, and assorted ephemera. Her intricate and enigmatic “Nervous” ﬁlms – Arbor, Ricky, and The Floor of the World – explore the limits of memory through enchanting juxtapositions of sound and image. Stacey Steers’ ﬁlms are composed of thousands of handmade works on paper; her latest ﬁlm, Night Hunter consists of over four thousand collages that displace silent-era ﬁlm star Lillian Gish, plunging her into an allegorical new role. Also showing is Phantom Canyon, a ﬁlm about time and memory that incorporates ﬁgures from Eadweard Muybridge’s turnof-the-century studies of human and animal locomotion. In a slightly different vein, the DIY, punk-inﬂuenced aesthetic of Martha Colburn will be showcased over ﬁve ﬁlms spanning

her entire career. Colburn’s emphatically hands-on approach to collage eschews computer graphics for brightly colored images drawn from popular culture and politics. Her paint-meets-punk sensibility will be featured in ﬁlms such as Asthma, Evil of Dracula, Secrets of Mexuality, Destiny Manifesto, and Triumph of the Wild. (JP)