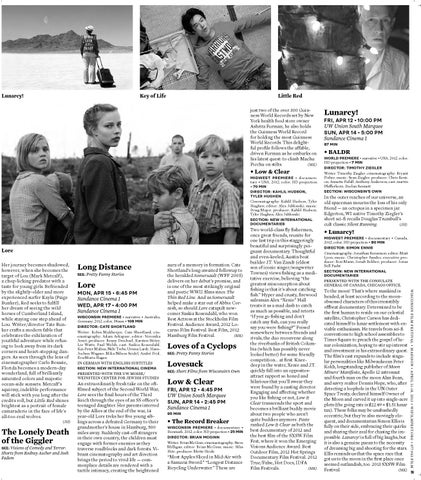 The Lonely Death of the Giggler SEE: Visions of Comedy and Terror: Shorts from Rodney Ascher and Josh Fadem

An extraordinarily fresh take on the oftﬁlmed subject of the Second World War, Lore sees the ﬁnal hours of the Third Reich through the eyes of an SS ofﬁcer’s teenaged daughter. Her parents interred by the Allies at the end of the war, 14 year-old Lore treks her ﬁve young siblings across a defeated Germany to their grandmother’s house in Hamburg, 500 miles away. Suddenly cast-off strangers in their own country, the children must engage with former enemies as they traverse roadblocks and dark forests. Vibrant cinematography and art direction brings the period to vivid life — commonplace details are rendered with a tactile intimacy, creating the heightened

aura of a memory in formation. Cate Shortland’s long-awaited followup to the heralded Somersault (WFF 2005) delivers on her debut’s promise, and is one of the most strikingly original and poetic WWII ﬁlms since The Thin Red Line. And as Somersault helped make a star out of Abbie Cornish, so should Lore catapult newcomer Saskia Rosendahl, who won Best Actress at the Stockholm Film Festival. Audience Award, 2012 Locarno Film Festival. Best Film, 2012 Hamburg Film Festival. (MK)

“Most Apples Sliced in Mid-Air with a Samurai Sword.” “Longest Distance Bicycling Underwater.” These are

In the outer reaches of our universe, an old spaceman mourns the loss of his only friend — an octopus in a specimen jar. Edgerton, WI native Timothy Ziegler’s short sci-ﬁ recalls Douglas Trumbull’s cult classic Silent Running. (JH)

To the moon! That’s where mankind is headed, at least according to the moonobsessed characters of this irresistibly offbeat documentary. Determined to be the ﬁrst human to reside on our celestial satellite, Christopher Carson has dedicated himself to lunar settlement with enviable enthusiasm. He travels from sci-ﬁ conventions to high school assemblies to Times Square to preach the gospel of lunar colonization, hoping to stir up interest and investment in his extraordinary quest. The ﬁlm’s cast expands to include singular personalities like Milwaukeean Peter Kokh, longstanding publisher of Moon Miners’ Manifesto, Apollo 12 astronaut and fourth man on the moon Alan Bean, and savvy realtor Dennis Hope, who, after detecting a loophole in the UN Outer Space Treaty, declared himself Owner of the Moon and carved it up into single-acre plots (the going rate is $22.49 + $1.51 lunar tax). These folks may be unabashedly eccentric, but they’re also movingly eloquent, and documentarian Simon Ellis is fully on their side, embracing their quirks and sharing their zeal for chasing the impossible. Lunarcy! is full of big laughs, but it is also a genuine paean to the necessity of dreaming big and shooting for the stars. Ellis reminds us that the space race that got us to the moon in the ﬁrst place once seemed outlandish, too. 2013 SXSW Film Festival. (MK) 19 WISCONSIN FILM FESTIVAL • MADISON • APRIL 11–18, 2013 • WIFILMFEST.ORG • 877.963.FILM

Her journey becomes shadowed, however, when she becomes the target of Lou (Mark Metcalf ), a chop-licking predator with a taste for young girls. Befriended by the slightly-older and more experienced surfer Kayla (Paige Bunker), Red seeks to fulﬁll her dream of seeing the wild horses of Cumberland Island, while staying one step ahead of Lou. Writer/director Tate Bunker crafts a modern fable that celebrates the exhilaration of youthful adventure while refusing to look away from its dark corners and heart-stopping dangers. As seen through the lens of cinematographer Carlo Besasie, Florida becomes a modern-day wonderland, full of brilliantly saturated colors and majestic ocean-side sunsets. Metcalf’s squirmy, indelible performance will stick with you long after the credits roll, but Little Red shines brightest as a portrait of female camaraderie in the face of life’s all-too-real wolves.

Two world-class ﬂy ﬁshermen, once great friends, reunite for one last trip in this staggeringly beautiful and surprisingly poignant documentary. Thoughtful and even-keeled, Austin boat builder J.T. Van Zandt (eldest son of iconic singer/songwriter Townes) views ﬁshing as a meditative exercise, believing “the greatest misconception about ﬁshing is that it’s about catching ﬁsh.” Hyper and crusty, ﬁrewood salesman Alex “Xenie” Hall treats it as a mad dash to catch as much as possible, and retorts “if you go ﬁshing and don’t catch any ﬁsh, can you really say you were ﬁshing?” Poised somewhere between friends and rivals, the duo reconvene along the riverbanks of British Columbia (which has possibly never looked better) for some friendly competition… at ﬁrst. Kneedeep in the water, Xenie and J.T. quickly fall into an oppositesattract rapport so honed and hilarious that you’ll swear they were found by a casting director. Engaging and affecting whether you like ﬁshing or not, Low & Clear transcends the sport and becomes a brilliant buddy movie about two people who aren’t quite buddies anymore. Paste ranked Low & Clear as both the best documentary of 2012 and the best ﬁlm of the SXSW Film Fest, where it won the Emerging Visions Audience Award. Best Outdoor Film, 2012 Hot Springs Documentary Film Festival. 2012 True/False, Hot Docs, IDFA Film Festivals. (MK)