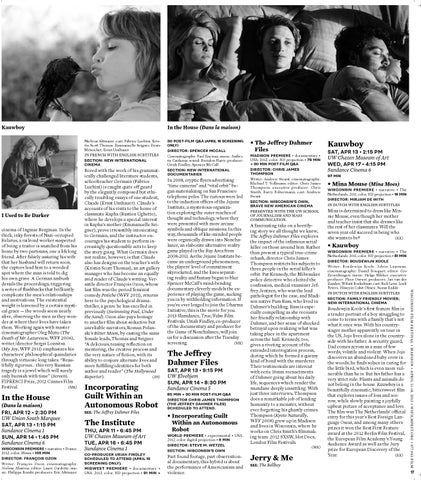 I Used to Be Darker

In 2008, cryptic ﬂyers advertising “time cameras” and “vital orbit” began materializing on San Francisco telephone poles. The curious were led to the induction ofﬁces of the Jejune Institute, a mysterious organization exploring the outer reaches of thought and technology, where they were presented with more arcane symbols and oblique missions. In this way, thousands of like-minded people were organically drawn into Nonchalance, an elaborate alternative reality game played in the Bay Area from 2008-2011. As the Jejune Institute became an underground phenomenon, the players’ level of commitment skyrocketed, and the lines separating reality and fantasy began to blur. Spencer McCall’s mind-bending documentary cleverly models the experience of playing the game, sucking you in by withholding information. If you’ve ever longed to join the Dharma Initiative, this is the movie for you. 2013 Slamdance, True/False Film Festivals. Uriah Findley, co-producer of the documentary and producer for the Game of Nonchalance, will join us for a discussion after the Tuesday screening. (MK)

Part found footage, part observational documentary, this hybrid is about the performance of Americanism and violence.

A fascinating take on a horrifying story we all thought we knew, The Jeffrey Dahmer Files explores the impact of the infamous serial killer on those around him. Rather than present a typical true-crime rehash, director Chris James Thompson restricts his subjects to three people in the serial killer’s orbit: Pat Kennedy, the Milwaukee police detective who elicited the confession, medical examiner Jeffrey Jentzen, who was the lead pathologist for the case, and Madison native Pam Bass, who lived in Dahmer’s building. Bass is especially compelling as she recounts her friendly relationship with Dahmer, and her sense of shocked betrayal upon realizing what was taking place in the apartment across the hall. Kennedy, too, gives a riveting account of the extended interrogation process, during which he formed a queasy kind of bond with the murderer. Their testimonials are intercut with eerie 16mm reenactments of Dahmer going about his daily life, sequences which render the mundane deeply unsettling. With just three interviews, Thompson does a remarkable job of lending humanity to a monster, without ever forgetting his ghastly crimes. Thompson (Kyoto Naturally, WFF 2008) grew up in Madison and lives in Wisconsin, where he works on Chris Smith’s ﬁlmmaking team. 2012 SXSW, Hot Docs, London Film Festivals. (MK)

Jerry &amp; Me SEE: The Bellboy

Mina is determined to dress like Minnie Mouse, even though her mother and teacher insist that she dresses like the rest of her classmates. Will the seven year old succeed in being who she wants to be? (KK)

Boudewjin Koole’s ﬁrst feature ﬁlm is a tender portrait of a boy struggling to come to terms with a family that’s not what it once was. With his countrysinger mother apparently on tour in the US, Jojo lives alone in the countryside with his father. A security guard, Dad comes across as a man of few words, volatile and violent. When Jojo discovers an abandoned baby crow in the woods, he ﬁnds solace in caring for the little bird, which is even more vulnerable than he is. But his father has a very strict rule: Plants and animals do not belong in the house. Kauwboy is a beautifully cinematic, bittersweet ﬁlm that explores issues of loss and sorrow, while slowly painting a joyfully upbeat picture of acceptance and love. The ﬁlm was The Netherlands’ ofﬁcial entry for this year’s Best Foreign Language Oscar, and among many others prizes it won the Best First Feature award at the 2012 Berlin Film Festival, the European Film Academy’s Young Audience Award as well as the Jury prize for European Discovery of the Year. (KK)

cinema of Ingmar Bergman. In the thick, inky forests of Nazi-occupied Belarus, a railroad worker suspected of being a traitor is snatched from his home by two partisans, one a lifelong friend. After falsely assuring his wife that her husband will return soon, the captors lead him to a wooded spot where the man is told to dig his own grave. A German ambush derails the proceedings, triggering a series of ﬂashbacks that brilliantly complicate the men’s relationships and motivations. The existential weight is leavened by a certain mystical grace — the woods seem nearly alive, observing the men as they wonder at where their lives have taken them. Working again with master cinematographer Oleg Mutu (The Death of Mr. Lazarescu, WFF 2006), writer/director Sergei Loznitsa (My Joy, WFF 2011) emphasizes his characters’ philosophical quandaries through virtuosic long takes. “Beautifully rigorous… this very Russian tragedy is a jewel which will surely only burnish with time” (Screen). FIPRESCI Prize, 2012 Cannes Film Festival. (MK)

Bored with the work of his grammatically challenged literature students, schoolteacher Germain (Fabrice Luchini) is caught quite off guard by the elegantly composed but ethically troubling essays of one student, Claude (Ernst Umhauer). Claude’s accounts of his visits to the home of classmate Rapha (Bastien Ughetto), where he develops a special interest in Rapha’s mother (Emmanuelle Seigner), prove irresistibly intoxicating to Germain, and the instructor encourages his student to perform increasingly questionable acts to keep the story going. What Germain does not realize, however, is that Claude also has designs on the teacher’s wife (Kristin Scott Thomas), an art gallery manager who has become an equally avid reader of Claude’s writing. Versatile director François Ozon, whose last ﬁlm was the period feminist comedy Potiche (WFF 2011), returns here to the psychological dramathriller, a genre he has excelled in previously (Swimming Pool, Under the Sand). Ozon also pays homage to another ﬁlm about seductive but unreliable narrators, Roman Polanski’s Bitter Moon, by casting the same female leads, Thomas and Seigner. “A delicious, teasing reﬂection on mentoring, the creative process and the very nature of ﬁction, with its ability to conjure alternate lives and more fulﬁlling identities for both author and reader” (The Hollywood Reporter). (JH)