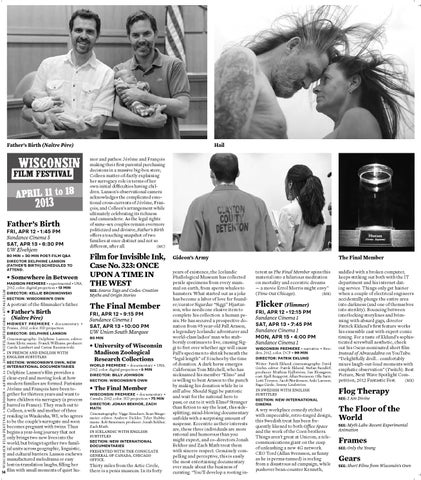 A portrait of the ﬁlmmaker’s father.

Delphine Lanson’s ﬁlm provides a clear-eyed and moving look at how modern families are formed. Parisians Jérôme and François have been together for thirteen years and want to have children via surrogacy (a process barred in France). They reach out to Colleen, a wife and mother of three residing in Waukesha, WI, who agrees to be the couple’s surrogate and soon becomes pregnant with twins. Thus begins a year-long journey that not only brings two new lives into the world, but brings together two familial units across geographic, linguistic, and cultural barriers. Lanson eschews manufactured melodrama or easy lost-in-translation laughs, ﬁlling her 14 ﬁlm with small moments of quiet hu-

Hail mor and pathos: Jérôme and François making their ﬁrst parental purchasing decisions in a massive big-box store; Colleen matter-of-factly explaining her surrogacy role in terms of her own initial difﬁculties having children. Lanson’s observational camera acknowledges the complicated emotional cross-currents of Jérôme, François, and Colleen’s arrangement while ultimately celebrating its richness and camaraderie. As the legal rights of same-sex couples remain evermore politicized and divisive, Father’s Birth offers a touching snapshot of two families at once distinct and not so different, after all. (MC)

Film for Invisible Ink, Case No. 323: ONCE UPON A TIME IN THE WEST SEE: Source Tags and Codes: Creation Myths and Origin Stories

Thirty miles from the Artic Circle, there is a penis museum. In its forty

Gideon’s Army years of existence, the Icelandic Phallological Museum has collected penile specimens from every mammal on earth, from sperm whales to hamsters. What started out as a joke has become a labor of love for founder/curator Sigurdur “Siggi” Hjartarson, who needs one elusive item to complete his collection: a human penis. He has secured a prospective donation from 95 year-old Pall Arason, a legendary Icelandic adventurer and world-class ladies’ man who stubbornly continues to live, causing Siggi to fret over whether age will cause Pall’s specimen to shrink beneath the “legal length” of 5 inches by the time of donation. A dark horse emerges: Californian Tom Mitchell, who has nicknamed his member “Elmo” and is willing to beat Arason to the punch by making his donation while he is still alive. Should Siggi be patriotic and wait for the national hero to pass, or cut to it with Elmo? Stranger than ﬁction to say the least, this sidesplitting, mind-blowing documentary unfolds with a surprising amount of suspense. Eccentric as their interests are, these three individuals are more rational and humorous than you might expect, and co-directors Jonah Bekhor and Zach Math treat them with sincere respect. Genuinely compelling and perceptive, this is easily the most entertaining documentary ever made about the business of curating. “You’ll develop a rooting in-

The Final Member terest as The Final Member spins this material into a hilarious meditation on mortality and eccentric dreams — a movie Errol Morris might envy” (Time Out Chicago). (MK)

A wry workplace comedy etched with impeccable, retro-tinged design, this Swedish treat has been frequently likened to both Ofﬁce Space and the work of the Coen brothers. Things aren’t great at Unicom, a telecommunications giant on the cusp of unleashing a new 4G network. CEO Tord (Allan Svensson, as funny as he is perma-tanned) is reeling from a disastrous ad campaign, while pushover bean-counter Kenneth,

saddled with a broken computer, keeps striking out both with the IT department and his internet dating service. Things only get hairier when a couple of electrical engineers accidentally plunge the entire area into darkness (and one of themselves into sterility). Bouncing between interlocking storylines and brimming with absurd gags, director Patrick Eklund’s ﬁrst feature works his ensemble cast with expert comic timing. For a taste of Eklund’s sophisticated screwball aesthetic, check out his Oscar-nominated short ﬁlm Instead of Abracadabra on YouTube. “Delightfully droll… comfortably mixes laugh-out-loud moments with emphatic observation” (Twitch). Best Picture, Next Wave Spotlight Competition, 2012 Fantastic Fest. (MK)

Flog Therapy SEE: I Am Divine

Frames SEE: Only the Young