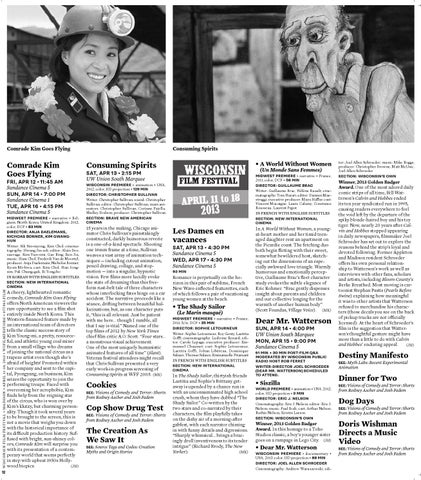 A cheery, lighthearted romantic comedy, Comrade Kim Goes Flying offers North American viewers the rare opportunity to see a ﬁlm shot entirely inside North Korea. This Western-ﬁnanced feature made by an international team of directors tells the classic success story of Kim Young-mi, a pretty, resourceful, and athletic young coal miner from a small village who dreams of joining the national circus as a trapeze artist even though she’s afraid of heights! Promoted within her company and sent to the capital, Pyongyang, on business, Kim seizes the opportunity to join the performing troupe. Faced with overcoming her acrophobia, Kim ﬁnds help from the reigning star of the circus, who is won over by Kim’s klutzy, but charming personality. Though it took several years to be brought to the screen, this is not a movie that weighs you down with the historical importance of its difﬁcult production history. Suffused with bright, sun-shiney colors, Comrade Kim will surprise you with its presentation of a contemporary world that seems perfectly in step with upbeat 1950s Hollywood biopics. (JH)

• A World Without Women

15 years in the making, Chicago animator Chris Sullivan’s painstakingly constructed, darkly humorous reverie is a one-of-a-kind spectacle. Shooting one 16mm frame at a time, Sullivan weaves a vast array of animation techniques — including cutout animation, pencil drawing, collage, and stopmotion — into a singular, hypnotic vision. Few ﬁlms more lucidly evoke the state of dreaming than this freeform rust-belt tale of three characters whose interlocking fates hinge on a car accident. The narrative proceeds like a séance, drifting between beautiful hallucinations; but, as one character puts it, “this is all relevant. Just be patient with me here… though I ramble, all that I say is vital.” Named one of the top ﬁlms of 2012 by New York Times chief ﬁlm critic A.O. Scott. “Four stars… a monstrous visual achievement. One of the most uniquely humanistic animated features of all time” (Slant). Veteran festival attendees might recall that Chris Sullivan presented a very early work-in-progress screening of Consuming Spirits at WFF 2005. (MK)

Visions of Comedy and Terror: Shorts from Rodney Ascher and Josh Fadem

Visions of Comedy and Terror: Shorts from Rodney Ascher and Josh Fadem

The Creation As We Saw It SEE: Source Tags and Codes: Creation Myths and Origin Stories

Romance is perpetually on the horizon in this pair of sublime, French New Wave-inﬂected featurettes, each of which follows a pair of vacationing young women at the beach.

In The Shady Sailor, thirtyish friends Laetitia and Sophie’s Brittany getaway is upended by a chance run in with an unconsummated high school crush, whom they have dubbed “The Shady Sailor.” Co-written by the two stars and co-narrated by their characters, the ﬁlm playfully takes on the dishy air of a morning-after gabfest, with each narrator chiming in with funny details and digressions. “Sharply whimsical… brings a bracingly droll inventiveness to its tender intrigue” (Richard Brody, The New Yorker). (MK)

In A World Without Women, a youngat-heart mother and her timid teenaged daughter rent an apartment on the Picardie coast. The fetching duo both begin ﬂirting with their sweet, somewhat bewildered host, sketching out the dimensions of an especially awkward love triangle. Warmly humorous and emotionally perceptive, Guillaume Brac’s ﬂeet character study evokes the subtle elegance of Eric Rohmer. “Brac gently dispenses insight about parents and children and our collective longing for the warmth of another human body” (Scott Foundas, Village Voice). (MK)

Winner, 2013 Golden Badger Award. In this homage to a Toho Studios classic, a boy’s younger sister goes on a rampage in Lego City. (JH)

Winner, 2013 Golden Badger Award. One of the most adored daily comic strips of all time, Bill Watterson’s Calvin and Hobbes ended its ten year syndicated run in 1995, causing readers everywhere to feel the void left by the departure of the spiky blonde-haired boy and his toy tiger. Now, nearly 20 years after Calvin and Hobbes stopped appearing in daily newspapers, ﬁlmmaker Joel Schroeder has set out to explore the reasons behind the strip’s loyal and devoted following. Former Appleton and Madison resident Schroeder offers his own personal relationship to Watterson’s work as well as interviews with other fans, scholars and artists, including Bloom County’s Berke Breathed. Most moving is cartoonist Stephan Pastis (Pearls Before Swine) explaining how meaningful it was to other artists that Watterson refused to merchandise his characters (those decals you see on the back of pickup trucks are not ofﬁcially licensed). At the heart of Schroeder’s ﬁlm is the suggestion that Watterson’s thoughtful gesture might have more than a little to do with Calvin and Hobbes’ enduring appeal. (JH)

Dinner for Two SEE: Visions of Comedy and Terror: Shorts from Rodney Ascher and Josh Fadem