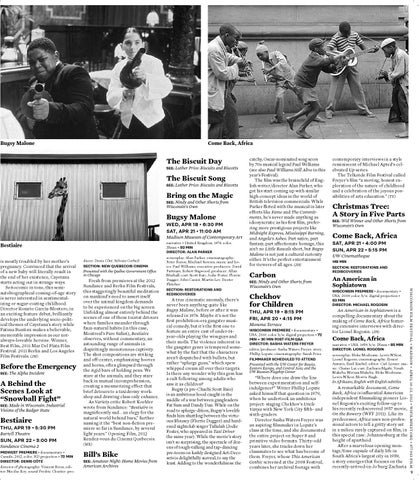 Bring on the Magic SEE: Nindy and Other Shorts from Wisconsin’s Own

Before the Emergency SEE: The Alpha Incident

A Behind the Scenes Look at “Snowball Fight” SEE: Made in Wisconsin: Industrial Visions of the Badger State

Fresh from premieres at the 2012 Sundance and Berlin Film Festivals, this staggeringly beautiful meditation on mankind’s need to assert itself over the animal kingdom demands to be experienced on the big screen. Unfolding almost entirely behind the scenes of one of those tourist detours where families meander through faux-natural habits (in this case, Montreal’s Parc Safari), Bestiaire observes, without commentary, an astounding range of animals in dispiritingly monotonous captivity. The shot compositions are striking and off-center, emphasizing hooves and horns, often glimpsed through the rigid bars of holding pens. We stare at the animals, and they stare back in mutual incomprehension, creating a mesmerizing effect that brief detours to a taxidermy workshop and drawing class only enhance. As Variety critic Robert Koehler wrote from Sundance: “Bestiaire is magniﬁcently sad… an elegy for the natural world behind bars,” further naming it the “best non-ﬁction premiere so far in Sundance, by several light years.” Opening Film, 2012 Rendez-vous du Cinema Quebecois.

A true cinematic anomaly, there’s never been anything quite like Bugsy Malone, before or after it was released in 1976. Maybe it’s not the ﬁrst prohibition-era gangster musical comedy, but it’s the ﬁrst one to feature an entire cast of under-14year-olds playing the wiseguys and their molls. The violence inherent in the gangster genre is tempered somewhat by the fact that the characters aren’t dispatched with bullets, but rather “splurge guns,” which spew whipped cream all over their targets. Is there any wonder why this gem has a cult following among adults who saw it as children? Bugsy (a pre-Chachi Scott Baio) is an ambitious hood caught in the middle of a war between gangleaders Fat Sam and Dandy Dan. While on the road to splurge-dition, Bugsy’s lovelife ﬁnds him shuttling between the virtuous Blousey (Florrie Dugger) and hardened nightclub singer Tallulah (Jodie Foster, who appeared in Taxi Driver the same year). While the movie’s story isn’t so surprising, the spectacle of dozens of tough-talking and tap-dancing pre-teens on lushly designed Art-Deco sets is delightfully surreal, to say the least. Adding to the wonderfulness: the

Carbon SEE: Nindy and Other Shorts from Wisconsin’s Own

Presented with the UW Center for Russia, Eastern Europe, and Central Asia; and the UW Russian Flagship Center

“Where does one draw the line between experimentation and selfindulgence?” Writer Phillip Lopate asked himself that question in 1979, when he undertook an ambitious project: staging Chekhov’s Uncle Vanya with New York City ﬁfth- and sixth-graders. Director Sasha Waters Freyer was an aspiring ﬁlmmaker in Lopate’s class at the time, and she documented the entire project on Super 8 and primitive video formats. Thirty-odd years later, she tracks down her classmates to see what has become of them. Freyer, whose This American Gothic screened at the 2008 Festival, combines her archival footage with

contemporary interviews in a style reminiscent of Michael Apted’s celebrated Up series. The Telluride Film Festival called Freyer’s ﬁlm “a moving, honest exploration of the nature of childhood and a celebration of the joyous possibilities of arts education.” (TY)

Christmas Tree: A Story in Five Parts SEE: Wid Winner and Other Shorts from Wisconsin’s Own

An American in Sophiatown is a compelling documentary about the making of Come Back, Africa featuring extensive interviews with director Lionel Rogosin. (JH)

A remarkable document, Come Back, Africa is inﬂuential American independent ﬁlmmaking pioneer Lionel Rogosin’s exciting follow-up to his recently rediscovered 1957 movie, On the Bowery (WFF 2011). Like its predecessor, Africa uses non-professional actors to tell a gritty story set in a milieu rarely captured on ﬁlm; in this special case: Johannesburg at the height of apartheid. After a marvelous opening montage/time capsule of daily life in South Africa’s largest city in 1959, a story emerges that focuses on the recently-arrived-in-Jo’burg Zacharia

is mostly troubled by her mother’s pregnancy. Convinced that the arrival of a new baby will literally result in the end of her existence, Cayetana starts acting out in strange ways. Seriocomic in tone, this semiautobiographical coming-of-age story is never interested in sentimentalizing or sugar-coating childhood. Director Rosario García-Montero, in an exciting feature debut, brilliantly develops the underlying socio-political themes of Cayetana’s story while Fatima Buntinx makes a believable, memorable impression as our notalways-loveable heroine. Winner, Best Film, 2011 Mar Del Plata Film Festival. 2011 Berlin and Los Angeles Film Festivals. (JH)

catchy, Oscar-nominated song score by 70s musical legend Paul Williams (see also Paul Williams Still Alive in this year’s Festival). The ﬁlm was the brainchild of English writer/director Alan Parker, who got his start coming up with similar high-concept ideas in the world of British television commercials. While Parker ﬂirted with the musical in later efforts like Fame and The Commitments, he’s never made anything as idiosyncratic as his ﬁrst ﬁlm, preferring more prestigious projects like Midnight Express, Mississippi Burning, and Angela’s Ashes. Part satire, part fantasy, part affectionate homage, this ain’t no Little Rascals short, but Bugsy Malone is not just a cultural curiosity either. It’s the perfect entertainment for viewers of all ages. (JH)