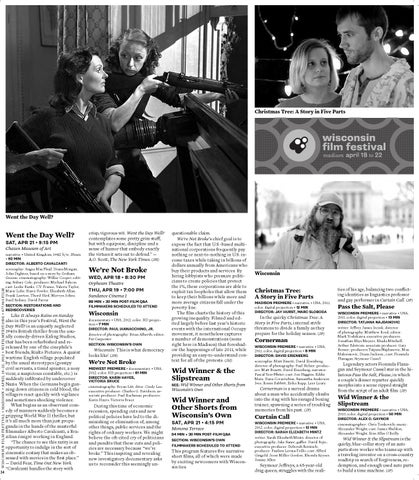 Like It Always Rains on Sunday also in this year’s Festival, Went the Day Well? is an unjustly neglected 1940s British thriller from the usually comedy-driven Ealing Studios, that has been refurbished and rereleased by one of the cinephile’s best friends, Rialto Pictures. A quaint wartime English village populated by the usual stereotypes (gossipy civil servants, a timid spinster, a nosy vicar, a suspicious constable, etc.) is suddenly inﬁltrated by undercover Nazis. When the Germans begin gunning down citizens in cold blood, the villagers react quickly with vigilance and sometimes shocking violence. What begins as an observant comedy of manners suddenly becomes a gripping World War II thriller, but it’s all much more than just propaganda in the hands of the masterful ﬁlmmaker Alberto Cavalcanti, a Brazilian émigré working in England. “The chance to see this rarity is an opportunity to indulge in the sort of cinematic ecstasy that makes us obsessed with movies in the ﬁrst place.” — David Fear, Time Out New York. “Cavalcanti handles the story with

crisp, vigorous wit. Went the Day Well? contemplates some pretty grim stuff, but with equipoise, discipline and a sense of humor that embody exactly the virtues it sets out to defend.” — A.O. Scott, The New York Times. (JH)

During this time of economic recession, spending cuts and new political policies have led to the diminishing or elimination of, among other things, public services and the rights of ordinary workers. We might believe the oft-cited cry of politicians and pundits that these cuts and policies are necessary because “we’re broke.” This inspiring and revealing new investigatory documentary asks us to reconsider this seemingly un-

questionable claim. We’re Not Broke’s chief goal is to expose the fact that U.S.-based multinational corporations frequently pay nothing or next-to-nothing in U.S. income taxes while taking in billions of dollars annually from Americans who buy their products and services. By hiring lobbyists who pressure politicians to create policies that protect the 1%, these corporations are able to exploit tax loopholes that allow them to keep their billions while more and more average citizens fall under the poverty line. The ﬁlm charts the history of this growing inequality. Filmed and edited largely before last year’s historic events with the international Occupy movement, it nonetheless captures a number of demonstrations (some right here in Madison) that foreshadow the happenings of late 2011, while providing an easy-to-understand context for all of the protests. (JH)

Wid Winner &amp; the Slipstream SEE: Wid Winner and Other Shorts from Wisconsin’s Own

This program features ﬁve narrative short ﬁlms, all of which were made by exciting newcomers with Wisconsin ties.

In the quirky Christmas Tree: A Story in Five Parts, internal strife threatens to divide a family as they prepare for the holiday season. (JP)

Cornerman is a surreal drama about a man who accidentally climbs into the ring with his enraged boxing trainer, spawning a series of troubling memories from his past. (JP)

Seymour Jeffreys, a 65-year-old drag queen, struggles with the reali-

Legendary actors Fionnula Flanagan and Seymour Cassel star in the hilarious Pass the Salt, Please, in which a couple’s dinner repartee quickly morphs into a scene ripped straight from the script of an adult ﬁlm. (JP)

Wid Winner &amp; the Slipstream is the quirky, blue-collar story of an auto parts store worker who teams up with a traveling inventor on a cross-country roadtrip in search of forgiveness, redemption, and enough used auto parts to build a time machine. (JP)